Lotterer had been running second behind eventual race winner Jean-Eric Vergne on the final lap of the event when he ran out of energy as he battled Audi's Lucas di Grassi.

Techeetah driver Lotterer slowed suddenly through the Circuit des Invalides' final sequence of corners and was overtaken by di Grassi before Bird slammed into the rear of his car just before the finish line.

Bird finished third, with the right-front wheel hanging off his Virgin Racing car, while Lotterer fell to sixth.

The stewards felt it was clear Lotterer had "turned left of the racing line" due to his energy shutdown, but added "he then rejoined the racing line causing [Bird] to hit the rear [of Lotterer]".

"The stewards noted that immediately prior to the collision [Lotterer] attempted to move out of the way but it was too late," continued the FIA bulletin.

In a separate announcement, Techeetah has been handed a €2500 fine for releasing Lotterer from his car swap in an unsafe manner as "crew members were not clear of the car".

Lotterer's grid penalty will be taken at next month's Berlin race. 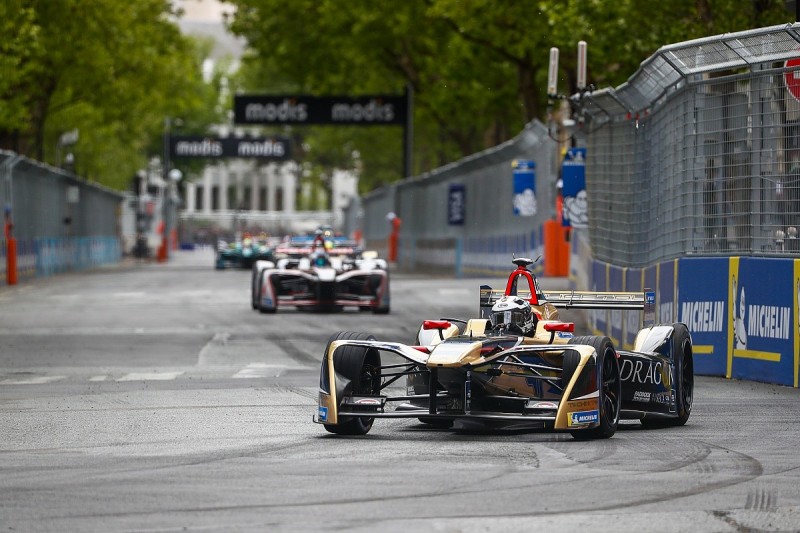 Explaining the final lap's events, Lotterer told Autosport that running out of energy "cuts the power for you".

"It just fades out initially and then it just cuts.

"I was coasting and then Sam came with huge speed difference, obviously.

"It's not an ideal situation, obviously, and it's not nice to crash like that but that's what Formula E is about.

"You can get caught by surprise and when there is so much speed difference it can quickly go wrong."

Asked if he could have moved out of Bird's way, Lotterer said: "Everything happened so quick I didn't know which side he was coming and I went for the inside and that was it.

"But in the end he finished third and I lost out."

Bird slammed Lotterer's driving as "not correct", saying: "You can't do a late swerve when people are obviously going to be overtaking. It's not correct, in any form of motorsport it's not correct."

Lotterer and Bird were also investigated for the Techeetah driver's pass for second late in the second stint, but no further action was taken on that incident.

Di Grassi vocally complained on his team radio about Lotterer's driving when the two came together at Turns 8 and 9 in the closing stages, and continued the criticism post-race.

"That was the first time he touched my car, before he was weaving around two or three or four times each straight - that was not very good behaviour.

"Then when he ran out of energy just before corner 10, where I was going to overtake him, he also tried to block me without energy, which makes no sense and almost finished my race for the second time."

Lotterer responded to di Grassi's comments by saying: "That's funny coming from him.

"I don't know what he was complaining about. He actually drove into me twice in this race. I don't care what he says."