A lairy end to the session resulted in a number of changes at the top of the timing sheets but, once the music stopped, Wehrlein ended the session with a 1m13.496s on a cold morning at the Autodromo Hermanos Rodriguez.

The session began just after sunrise in Mexico City, with early trepidation from the drivers as they waited for the track conditions to come to them.

That preceded a flurry of more competitive times, with Dan Ticktum the first to break into the 1m15s with a 1m15.514s.

Sam Bird then produced a yellow flag in the Foro Sol complex with an electronics issue, but was able to complete a full reset to bring his Jaguar back to the pitlane.

Antonio Felix da Costa put his Porsche on top with a 1m15.231s, followed by Oliver Rowland as the Mahindra driver atoned for his Friday practice crash to go up to second.

The times then continued to fall, and Pascal Wehrlein overcame his new Porsche team-mate with a 1m14.427s, and then raised the bar with a 1m13.987s. 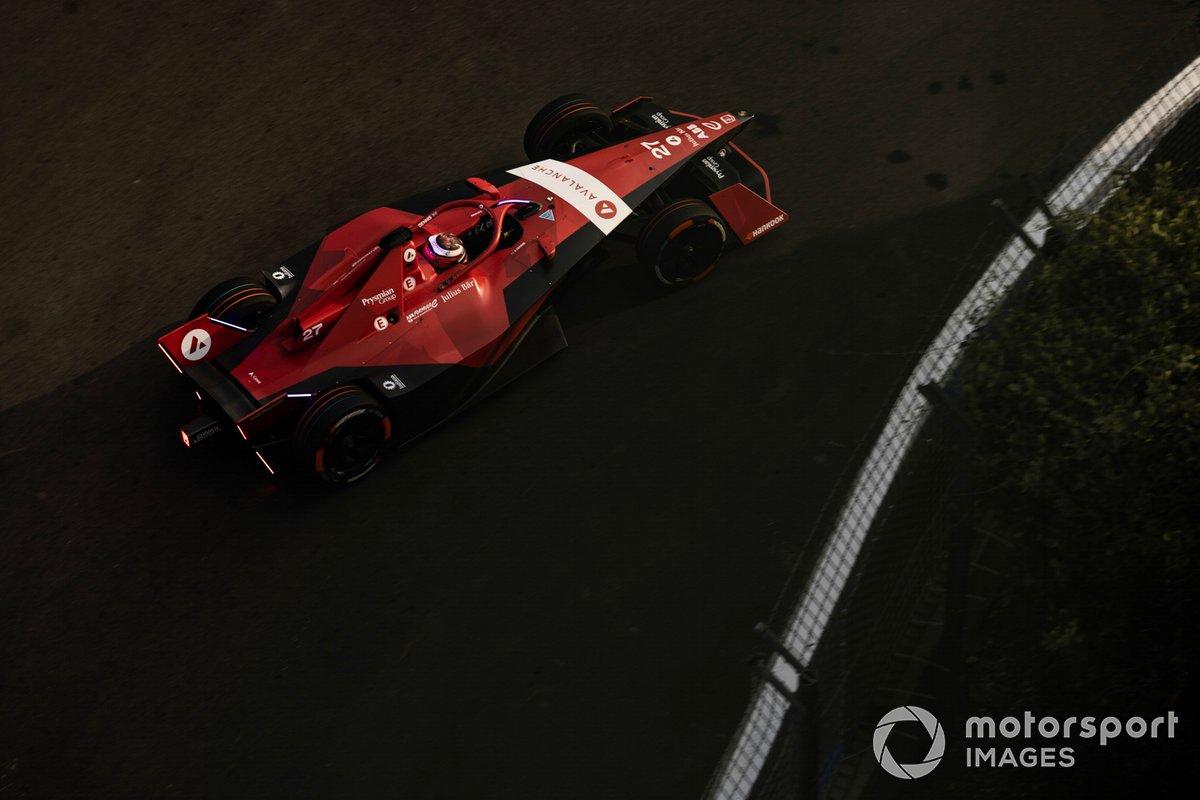 Rookie Jake Hughes then found a 1m13.658s to get clear of Wehrlein's headliner, continuing to impress in his first Formula E sessions, as Andretti's Jake Dennis got within 0.035s of his namesake to go second fastest ahead of the halfway point of FP2.

Edoardo Mortara clipped the wall with the rear of his car at the Peraltada while on a hot lap, breaking his left-rear suspension in a near carbon copy of Rene Rast's incident on Friday.

With fewer than five minutes on the clock, Mitch Evans ended Hughes' lengthy stranglehold over the session with a 1m13.548s, but the Kiwi's tenure at the top was considerably shorter as Sergio Sette Camara pasted his NIO 333 to the top of the timing boards with a 1m13.506s.

Ticktum would have dispatched his team-mate after setting the best first and third sectors, but an iffy middle portion of the lap put paid to those chances.

Wehrlein then edged Sette Camara by 0.010s as the session drew to a close to go top, and although Dennis fired in a 1m13.137s at the flag to claim top spot over the Porsche driver, the Briton's lap was chalked off for track limits.

Vergne split the already-tiny gap between Wehrlein and Sette Camara to grab second on the timing boards, continuing to show impressive pace on board the DS Penske.

Evans was fourth to give Jaguar hope after a difficult session, ahead of reigning champion Stoffel Vandoorne, while Hughes and Dennis collected sixth and seventh.

Mortara only placed 19th after his visit to the outer Peraltada wall, while Bird got out at the end of the session for a cursory run after spending much of the half-hour practice waylaid in the pits - but propped up the timing boards.