Nissan e.dams driver Sebastien Buemi says his opening lap retirement in Formula E's Valencia E-Prix was “tough” to accept after he was taken out by Porsche's Andre Lotterer.

Buemi has endured a tough start to the 2020/21 campaign as the team continues to race with its old powertrain - having delayed the introduction of its new kit until next month’s Monaco E-Prix.

The 2015/16 champion scored only 11 points in the opening two double headers of the year, but qualified a season-best fourth for the first Valencia race after successfully progressing into the superpole section of qualifying.

However, his race was abruptly ended when Lotterer tagged his right-rear corner at Turn 9 while battling with Venturi's Norman Nato, leaving Buemi beached in the gravel.

Lotterer was deemed responsible for the incident and promptly handed a drive-through penalty, ultimately retiring from the race after another tangle with Nato's team-mate Edoardo Mortara at Turn 1.

Asked for his take on the incident that ended his race, Buemi said he was frustrated to lose out on a top result on a weekend where he and Nissan have been competitive in an otherwise difficult start to the season.

“If I had managed a bit quicker the corner before maybe I just would have missed it, just a spot of the game,” the Swiss told Autosport.

“I just couldn’t do anything. All the hard work, to be spun around after only one lap, it’s tough. Andre has a lot of experience, it’s a shame this happened.

“I didn’t do an amazing job [this season], the car had some issues and the only times things were working well we basically got spun around.

“Who knows what we could have done today. I think the car was good. The only time we are really good we get spun around. If you have people crashing into you, doing mistakes, then that’s it.” 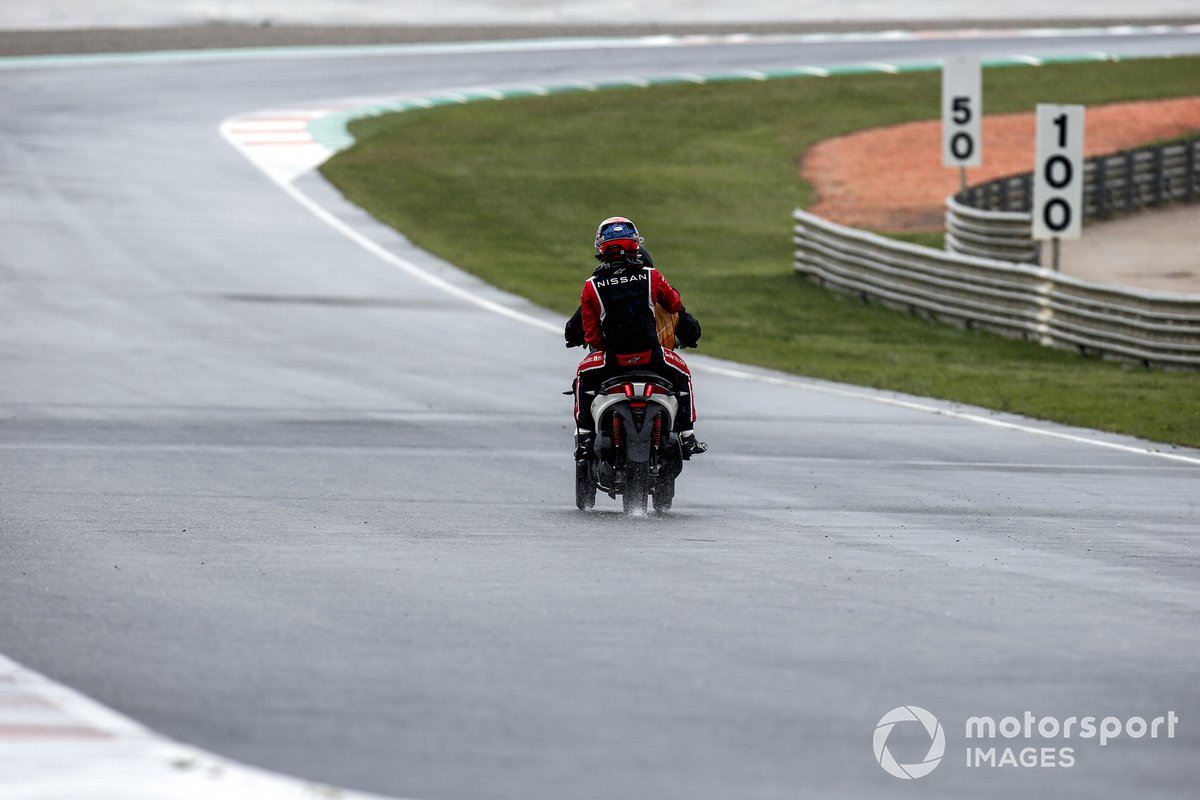 Sebastien Buemi, Nissan e.Dams on the back of a scooter after retiring from the race

The contact with Buemi was the second time in as many race weekends that Lotterer has been involved in a first-lap collision, having crashed into the leading Mercedes of Stoffel Vandoorne in the first Rome race earlier this month.

However, Lotterer felt there was little he could have done to avoid the incident, laying the blame on the "clumsy" circuit layout of the adapted Ricardo Tormo circuit

“Honestly I don’t know what I could do differently,” Lotterer told Autosport.

“Sebastien was quite far away. I was battling with Norman and suddenly Sebastien is there, I think the layout of the track is a bit clumsy.

“We saw a few collisions in that corner, unfortunately I couldn’t avoid it.

“So sorry for Seb, it was impossible to see him through Norman.”

Lotterer said that his collision with Mortara while fighting for 15th position - which caused the crucial fifth and final safety car of the controversial race - had been caused by a brake problem that also forced Porsche team-mate Pascal Wehrlein to retire.

Lotterer, who is yet to score a point five races into the 2021 season, will carry a three-place grid penalty into the second part of the Valencia double-header on Sunday for the incident.

The three-time Le Mans winner added: “I still had brakes but I couldn’t stop the car as usual and couldn’t avoid the collision.”