Norris banished his starting demons with a good getaway from pole, but front-row partner Callum Ilott tucked into his slipstream out of La Source, and stayed wedged to the back of Norris's Carlin Dallara-Volkswagen through Eau Rouge.

Ilott pulled to the left along the Kemmel straight, but couldn't complete the move, although he stuck it out around the outside of Norris at Les Combes.

Ilott ran off the track and, as he rejoined the circuit, he bounced over a kerb and clattered into Jake Hughes, who had lost third place to Maximilian Gunther in the Les Combes shuffling.

That snapped the left-rear suspension of Hughes's Hitech GP car, which was launched into the barrier and out of the race.

It also delayed Ilott, so Gunther snuck into second place ahead of Nikita Mazepin and Ralf Aron, before the safety car was called to clear Hughes's car away.

Norris made a good restart, but Gunther got close enough to have a look to the outside at Les Combes before settling into second.

Soon Norris pulled a gap of more than a second, and Gunther came under attack from Mazepin, the Russian Hitech GP driver having his best race to date in F3. 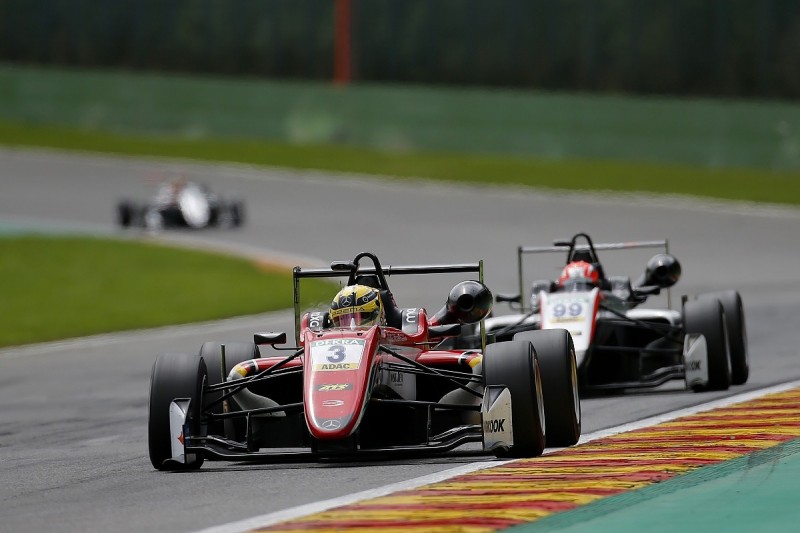 Mazepin pulled off a spectacular move around the outside of Gunther at Les Combes, Prema Powerteam's championship leader mindful of the need to collect points and reluctant to force the issue once the Force India F1 tester was alongside.

Impressively, Mazepin trimmed the gap to Norris by setting fastest lap with six laps to go, but then found his front tyres going off after chasing Gunther and Norris was able to extend the advantage once again to take the flag 2.807 seconds clear.

"The weekend so far has been very strong - fastest in every session and a win," said Norris.

"Nikita started catching me a little so I had to start to push a bit, but then I opened up the gap and I could relax - [it was] a very good race."

Ilott passed Aron for fourth shortly after the restart, but was called in for a drive-through penalty for the clash with Hughes, dropping him to the back of the field. He recovered to 14th.

Aron had run wide over the kerb at Pouhon on lap one, and this could have been the cause of his subsequent slide down the order to finish outside the points.

Carlin's Jehan Daruvala moved up to fourth, but came under attack late in the race from the Van Amersfoort Racing car of a charging Joey Mawson, the Australian advancing from 11th on the grid.

Mick Schumacher, who had climbed from 14th, was also close at hand in his Prema Dallara-Mercedes car to take sixth, with VAR's Harrison Newey next up.

Title contender Joel Eriksson completed a couple of spectacular moves early in the race from his lowly grid slot but the Motopark man clearly lacked pace again, and he lost eighth in the closing stages to Carlin's Ferdinand Habsburg.

The last point was claimed by VAR driver Pedro Piquet.