Habsburg was one of four leaders in a race in which fortunes waxed and waned, drafting past championship leader Maximilian Gunther on the Kemmel straight on lap 12 of 16.

Habsburg's team-mate in the Carlin Dallara-Volkswagen squad, Lando Norris, who was the initial leader.

As he had done on his way to victory in the opening race, Norris again got a good getaway from pole, only for fellow front-row man Callum Ilott to slipstream past him on the Kemmel straight.

Guan Yu Zhou also got ahead of Norris to the outside, with a fast-starting Habsburg on the inside, before Norris ran out of room and made contact with Zhou.

While the Ferrari junior retired to the pits, Norris was out on the spot and Habsburg was delayed, dropping to sixth.

Gunther moved up to challenge Ilott in the melee and made a superb move to take the lead around the outside of Les Combes on lap two.

Ilott briefly dropped to third behind Jake Hughes before regrouping to attack Gunther, and repaid the compliment to his Prema Powerteam stablemate to reclaim the lead with an identical outside-at-Les-Combes move. 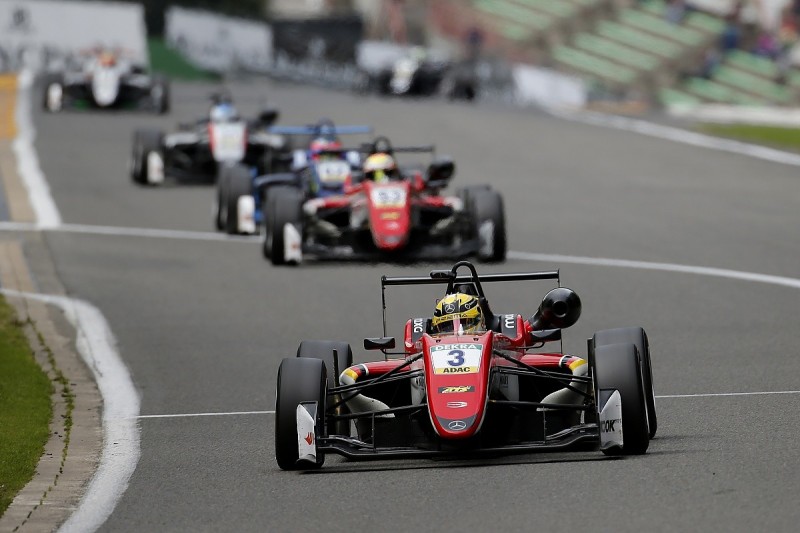 Just one lap later Gunther slipstreamed back ahead of Ilott, and from then on the Briton fell down the order to an eventual seventh place.

It was Habsburg who moved up to second, Gunther staying in front for only four more laps before the Austrian royalty made his eventual race-winning move.

"It was a really fun race," said Habsburg who, with Carlin expecting rain on Saturday, gambled on using all four of his remaining new tyres from his weekend allocation.

"I had an amazing start but got a bit unlucky at Les Combes, but I came back - I had loads of grip and confidence in the car.

"I had a pretty good feeling from about lap 10; I thought I had a good chance so I went for it, and it worked out really well."

The other remarkable drive was that of title contender Joel Eriksson, who started from 12th on the grid.

The Swede made moderate progress early on, but picked his way through the pack in his Motopark car, and completed a brilliant drive by passing Gunther for second on the penultimate lap.

Hitech GP driver Hughes was in the mix throughout and finished fourth, while team-mate Nikita Mazepin muscled his way past Carlin's Jehan Daruvala at the Bus Stop chicane on the final lap to take fifth.

But a post-race two-second penalty issued to Mazepin, for forcing Mick Schumacher onto the grass on the run to Bruxelles, has dropped the Russian two places to seventh, behind Daruvala and Ilott.