McLaren-Honda protege Norris provided a thrilling opening couple of laps as he hounded Gunther's Prema Powerteam Dallara-Mercedes, and his second place was enough to vault him ahead of pre-race championship leader Joel Eriksson, who crashed out of fourth place.

Gunther got a better start than poleman Norris and was already level with the Carlin Dallara-Volkswagen as they headed into the kink after the start before claiming the advantage at the Gare corner.

But Norris threw everything into trying to pass, and on the second lap he ran side by side to the outside of Gunther at the Pont Oscar left-hander.

He then nosed to the inside of Gunther at the Lycee hairpin, and the Bavarian left enough racing room while keeping sufficient momentum on the outside line.

The duo ran side by side into the daunting Parc Beaumont, before Gunther got the line and stayed in front.

Gunther settled down and by lap nine had established a one-second margin.

The advantage extended to three seconds with seven laps remaining, before Norris halved the gap when Gunther slowed for a yellow flag.

Gunther had enough in hand for his lead to never seriously be threatened, as he claimed his first win of 2017.

"I had a really good start, and Lando and me had some good fighting in the opening laps," said Gunther.

"As soon as I got a gap I just found my pace and then it was just about controlling the race and not making mistakes."

"I lost a bit of time with the yellow flag but after that I could breathe a bit - I'm extremely happy to be back in business." 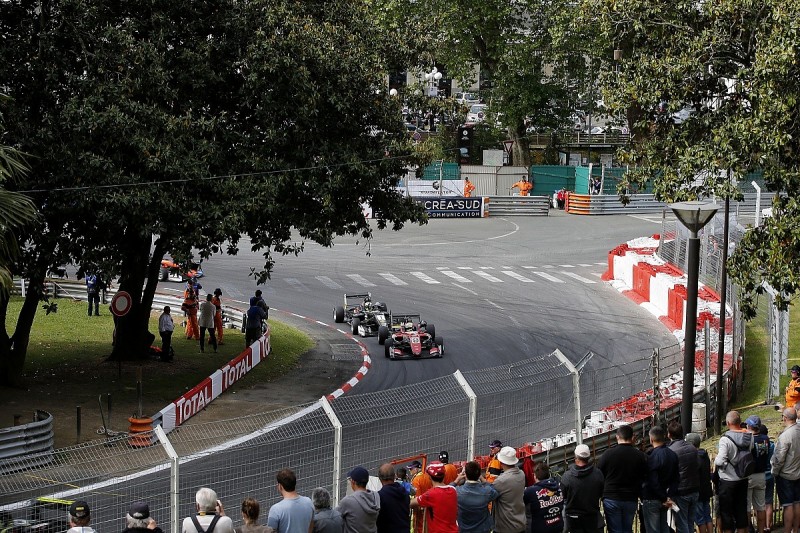 Callum Ilott soaked up a challenge from Eriksson during the early laps before inching away from the Swede.

The Prema-run Brit closed on Norris during the middle stages of the race, but fell away again and completed the podium.

Eriksson's crash out of fourth place came with 10 laps to go at the Foch chicane, and it promoted the battle between Harrison Newey and Ralf Aron.

Newey put in the best performance of his F3 career in his Van Amersfoort Racing machine to hold off the Hitech GP car of Aron, with the Estonian's team-mate Jake Hughes shadowing the pair throughout.