The Prema Powerteam driver had converted pole into the race lead before he crashed at the exit of the notorious Foch chicane.

Asked whether he was pushing too hard on the first lap, Ilott told Autosport: "I don't even think so - we have to see.

"Obviously it was different conditions [to qualifying], but it felt like I had the grip.

"I didn't even take much of the second [apex] kerb - I just bounced and went into the wall.

"We've had a quick look at the data and it's not faster than anyone else."

A sudden shower of rain appears to be to blame for the later crashes of Joey Mawson, Jake Dennis and Jake Hughes, which happened in close proximity within one lap of each other. 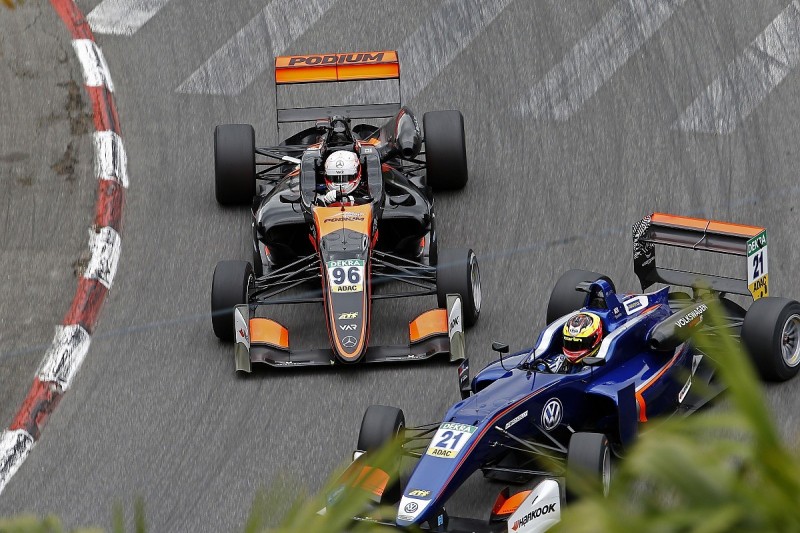 Van Amersfoort Racing's Mawson, who had the heaviest impact, told Autosport: "I just got caught out with the drizzle to be honest - I turned in, the rear just went and that was it.

"I'm fine though - the first thing I was worried about is if the car would make it [for second qualifying].

"I feel bad for the team because we were on for a podium."

Carlin driver Dennis added: "It was raining on and off, and we both [Mawson and Dennis] turned in for Turn 6 [Parc Beaumont] and had almighty moments.

"I did my best to slow down as much as possible, but it wasn't enough.

"After that I was just trying to survive on two wheels - Maxi [Gunther] tried to overtake me around the outside when I had no left-rear suspension and hit me; he did a nice little doughnut and carried on."

Hitech GP racer Hughes said: "All the crashes were guys at the front, who were cracking on a bit.

"I had no warning - it felt like the front bottomed a bit into Turn 6 and it picked the front of the car up and it just understeered into the wall.

"I don't know whether something was down [on the track] or whether we were pushing too hard."