By the ninth lap of 28, Norris was 4s in front of the Prema Powerteam Dallara-Mercedes of Gunther when the safety car was called after David Beckmann crashed at the Foch chicane and took some time to emerge from the wreckage.

Norris, who had two new tyres left from his weekend allocation to the zero of Gunther, built up a 2.6s advantage within eight laps of the restart.

But then it all went wrong and, just as happened to Eriksson in race two, Norris suffered a front-suspension failure at Foch, bounced off the final apex and hit the wall.

Gunther was left with a 1.5s lead over Prema team-mate Callum Ilott, and reeled off the remaining laps to win the Pau GP at his third attempt.

"To win the Pau Grand Prix is very special - apart from the 25 points, which are of course extremely important, I'm very happy," said Gunther.

"I saw my chance at the start, but unfortunately my revs dropped and I had to push the clutch again - it was an exciting moment but I still had P2.

"Lando was very quick, and to be honest I decided not to take so many risks, especially over the big kerbs, because I saw some cars crashing in the first two races." 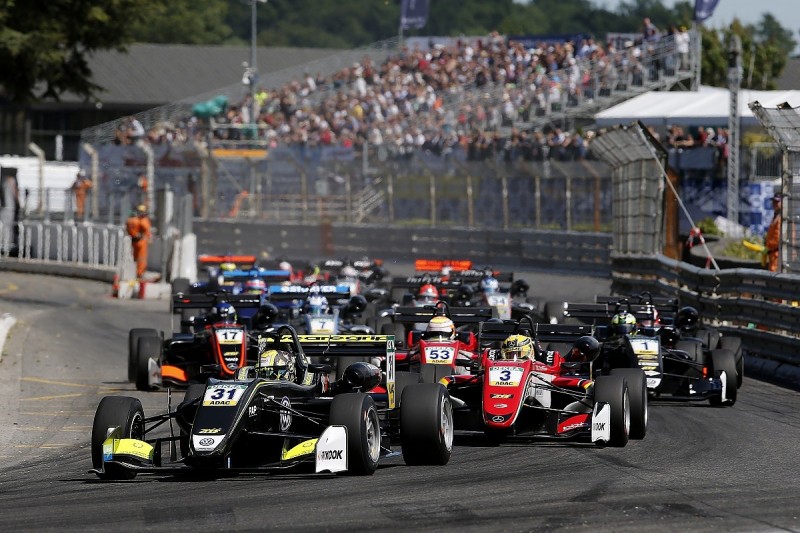 Ilott came under pressure from the Hitech GP car of Ralf Aron during the middle of the race.

The Estonian ran sixth in the early stages behind Harrison Newey and Joel Eriksson.

Eriksson was swarming all over Newey, but was taken by surprise when Aron darted inside at the Lycee hairpin.

Joey Mawson drew alongside Eriksson on the approach to Parc Beaumont, but ran out of room and sideswiped the barriers.

Although the Australian continued for a couple of laps, he pitted with suspension damage.

Aron passed Newey at the restart, going to the outside of the Van Amersfoort Racing driver at the Gare corner, which put him on the inside on the climb up the hill to Pont Oscar.

Newey continued to soak up pressure from Eriksson's Motopark car to claim his second fourth place of the day, while Eriksson retakes the championship lead on a wins countback over Norris following his fifth place.

A puncture for Nikita Mazepin promoted Carlin's Ferdinand Habsburg to what became sixth position, while Tadasuke Makino held off Pedro Piquet for seventh.