The 18-year-old Briton, who only arrived in Macau on Wednesday evening after hot-footing it from Brazil following his cancelled F1 test, put in two laps with his Carlin Dallara-Volkswagen that were considerably quicker than the best anyone else could manage.

Norris set purple times in the challenging mountain sector that were almost a second ahead of the opposition, but admitted that much of his advantage was created by taking on two new tyres - in common with most of his team-mates - at the third red-flag stoppage of a chaotic session.

Most of the leading runners have been keeping their powder dry on tyres, with 14 Yokohamas allocated to each car for the weekend, and the Japanese rubber proving quite high on degradation, so most stayed on their set from free practice.

"My driving was a bit affected by the graining, so I was setting myself a false limit," said Norris, "but on new tyres it was quite a big jump.

"It's a bit hard to know what our pace is compared to the others - when the time comes for four new [tyres] that'll be the first time we see the real pace of everyone.

"So I'm happy with qualifying, but I can't be too happy yet."

Pedro Piquet was another to fit new tyres at the third red flag, and he took second position with his Van Amersfoort Racing car.

Even so, Piquet was also second best on old rubber, and at the time of that stoppage he was behind only Maximilian Gunther.

Gunther was happy to bounce back from his technical problem in free practice to take third fastest in his Prema Powerteam car, the German driving spectacularly and topping those who stayed on old rubber.

Formula Renault Eurocup race winner Dan Ticktum was a superb fourth for Motopark, the Red Bull junior and team-mate Joel Eriksson (fifth fastest) suffering because they were relatively light on fuel, so joined the track late after the third stoppage.

When Jehan Daruvala smacked the barriers at San Francisco Bend, that caused a fourth and final red flag - with fewer than two minutes remaining on the clock - meaning Ticktum and Eriksson had not yet completed a flying lap in the final part of the session.

Ilott was another to join the track late at the end - in his case he had a few minor problems that needed tweaking - and said: "I only did three laps - can't everyone keep it on the track for two laps?" 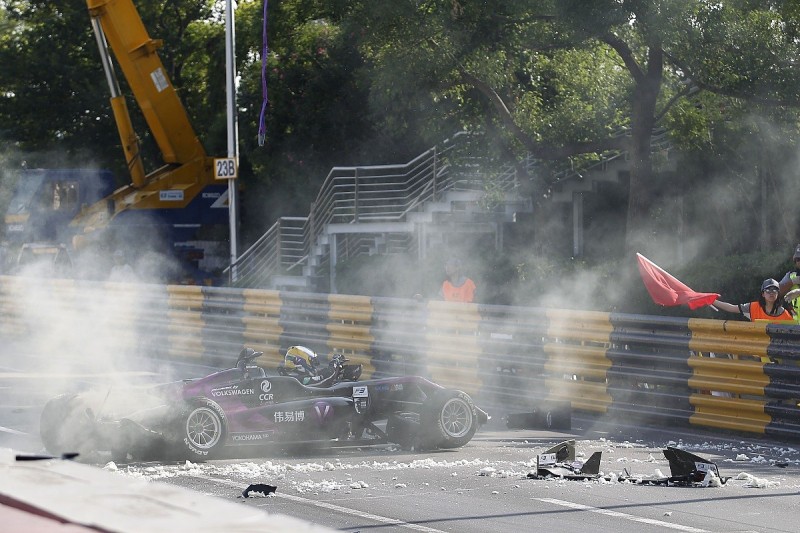 Formula Renault Eurocup champion Sacha Fenestraz was a strong eighth for Carlin, from free practice pacesetter Sergio Sette Camara, whose crash at Fishermen's Bend (pictured above) caused the third red flag and a delay of almost an hour while barriers were repaired.

The other red flags were caused by 'Dragon' and Alex Palou, the Spaniard crashing and coming to rest on Faraway Hill.