Norris held a comfortable lead with 10 laps to go, only for front-suspension failure to pitch his Carlin Dallara-Volkswagen into the barriers at the Foch chicane.

The accident allowed Maximilian Gunther to take victory, and close to just two points behind joint F3 European Championship leaders Joel Eriksson and Norris, with Eriksson ahead on wins countback.

"The pace was just extremely good," said Norris, who had banished his starting problems by converting pole position into the race lead.

"I was half a second a lap or so quicker than Maxi at the beginning, and I just felt extremely good, with loads of confidence.

"I was a bit annoyed there was a safety car, but before the safety car my general pace was still two or three tenths faster a lap, so I was confident I could pull away again, which I did.

"And then the front-left suspension broke basically.

As Norris took the apex at Foch, the suspension broke and plunged him into the wall.

"The car was perfect, and it didn't handle any differently in any corner," Norris told Autosport.

"Just as I landed [off the first apex] and turned into the right [second apex] the front-left wheel went to the left, so I couldn't turn.

"I was taking less kerb than the others, and I did nothing different - it was just the perfectly wrong angle and that buckled it basically.

"There's nothing I could have done." 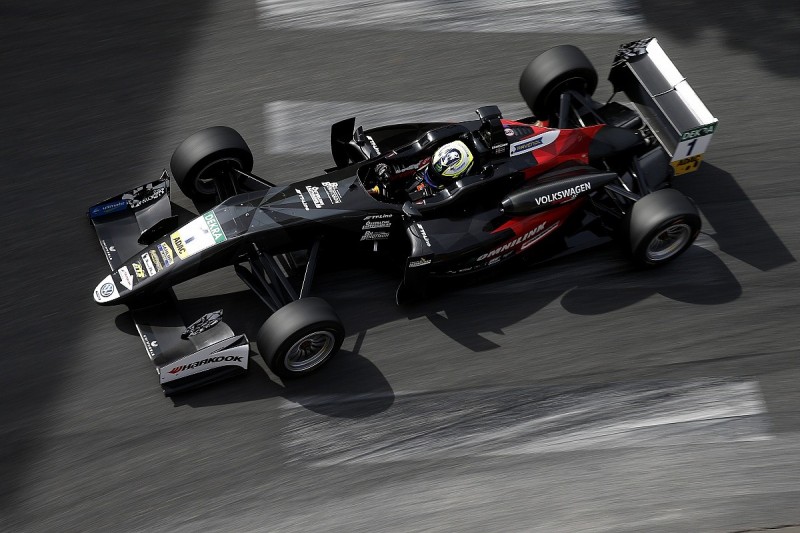 The build-up to Norris's crash was different to Eriksson's at the same corner, which cost the Motopark driver fourth place with six laps remaining in race two.

"In the middle of the race I felt there was something wrong in the front-left suspension, because the car was running strangely," said the Swedish BMW DTM junior.

"Then just before the accident it got much worse in the long corner [Parc Beaumont] - crazy snaps in the car.

"I could feel something went loose, and when I hit the kerb everything just lifted - I saw the wheel go up and went straight on into the wall.

"It was unlucky but shit happens."

Neither Norris's nor Eriksson's accidents - along with several others - caused a safety car, and their fellow title contender Callum Ilott praised the marshalling and crane operators.

"Thanks to the marshals for being so quick," said Ilott, who crashed out of the lead at the same place in race one.

"They've been really good all weekend at getting things out of the way without the need for safety cars, and it's allowed us to get on with racing."