Renault-affiliated GP3 Series championship leader Anthoine Hubert and his team-mate Callum Ilott, who is second in the championship, have both been disqualified from the Monza sprint race

Ferrari Academy driver Ilott finished third, one spot ahead of Hubert, passing him during the race and clawing back some points in an important result for the title battle.

But now the ART Grand Prix pair have been thrown out of the Sunday morning race for tyre pressure offences, meaning Hubert's tally is now 176 points, down from his previous total of 184.

His gap to Ilott after the race was 27, but with both exclusions, Hubert now leads by 31 points over fellow ART driver Nikita Mazepin, who was promoted into third by the exclusions.

A GP3 Series statement said: "Following today's GP3 Series race two at Monza, Italy, post-race scrutineering determined that both Callum Ilott and Anthoine Hubert - who finished third and fourth respectively - were both in breach of the official tyre pressure limits.

"The left-rear tyre of both ART Grand Prix drivers were below the minimum pressure specified by the official tyre supplier, and as a result, both drivers have been excluded from the final race results. 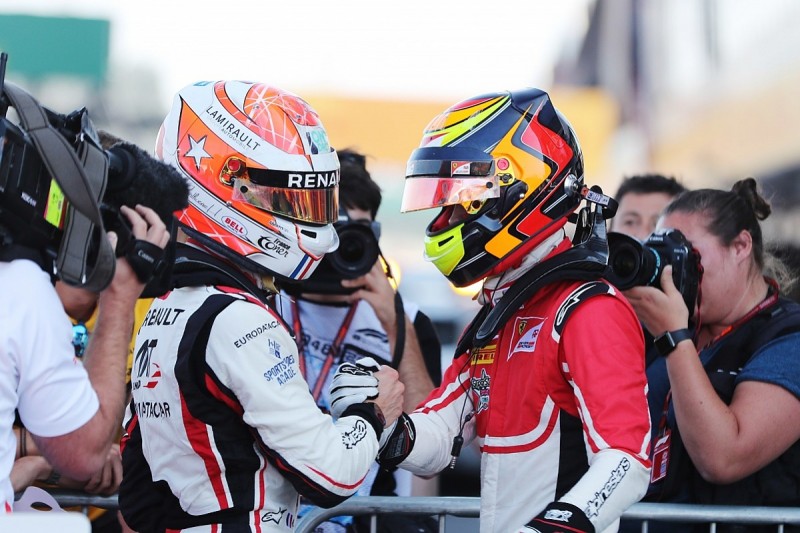 "As such, Nikita Mazepin has been promoted into third position, with every driver thereafter moving up two positions - with Campos Racing pair Leonardo Pulcini and Simo Laaksonen being elevated into the points-paying positions.

"With the disqualification of llott and Hubert, the drivers' standings have changed; Hubert continues to lead with 176 points, while Mazepin now stands on 147 points - moving above Ilott on countback having won more races."

The sprint race was one of the best of the 2018 season, with Pedro Piquet and Giuliano Alesi fighting lap-after-lap for the victory.

Piquet earned the win, meaning Trident was victorious in both GP3 races at its home round thanks to David Beckmann's feature race win.

One other driver was awarded a penalty on Sunday afternoon, with MP Motorsport driver Devlin DeFrancesco deemed to be at fault for pushing Juan Manuel Correa off the road on the straight leading to the Ascari chicane on the opeing lap.

Arden's Gabriel Aubry was collected by Correa and both of their races were ended while DeFrancesco took 13th.

DeFrancesco has been given a 20s penalty and is demoted to 15th.