Polesitter Leonardo Pulcini had given the non-ART runners hope by scoring the first pole for a different team, Campos, since Barcelona in 2016.

But a poor start for the Italian - his first from the top spot - relegated him to fifth in the early running of the season opener.

From second on the grid, Mazepin pounced and set about building a two second gap, which only increased as the race went on thanks to the battle behind.

Ilott appeared to have the taking of Hubert, after passing him with DRS into Turn 1 on lap 12 of 22, and Ilott moved clear.

But with a handful of laps to go, it became clear that Hubert had undertaken a tactical masterstroke, saving his tyres as he breezed back past his fellow European F3 graduate with a couple of laps to go.

Pulcini did recover to fourth, but only after a mistake from MP Motorsport's Dorian Boccolacci, who ran wide at Turn 3, opening the door for the rejuvenated Campos driver Pulcini.

Boccolacci then came under late pressure because of his mistake, but held on to beat German David Beckmann and Ferrari Academy driver Giuliano Alesi, who made good progress from 10th on the grid and takes a provisional second for tomorrow's reverse grid race with today's seventh place finish. 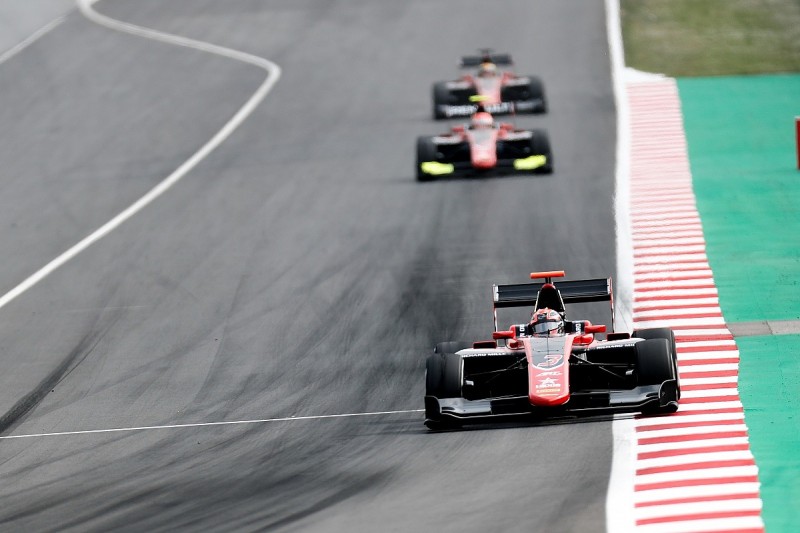 The Jenzer driver managed his tyres better than the person in that spot for the majority of the race, Jake Hughes.

Even without DRS, such was Hughes' tyre degradation, Correa was able to seal the spot at Turn 1 with two laps to go.

Hughes had previously fought off Alessio Lorandi, who attempted a robust move around the outside at Turn 1, but he clipped the inside of the curb which spat him into the adjacent gravel trap, he recovered to 11th.

Pedro Piquet, son of three-time Formula 1 champion Nelson, rose to ninth late on in his GP3 debut with Trident, as Diego Menchaca made the most of the race sealing 10th, despite lacking track time thanks to a hydraulic issue in practice.

Both he and team-mate Simo Laaksonen, who finished 16th, had issues before the race started as their cars trailed cables from cooling equipment left in on the starting grid.