Norris's team, Carlin pulled a strategic masterstroke by sending the 2016 McLaren Autosport BRDC Award winner out at the beginning of the session along with team-mate Jehan Daruvala, then pitting for two new tyres on the left side after a few laps; Hitech Grand Prix played a similar card.

Norris banked two laps in the 1m09.3s bracket and after a relatively kerb-averse weekend, smashed the apexes at the Foch chicane to record a 1m09.085s.

His nearest rival in his group was race-one poleman Callum Ilott, who could only manage a 1m09.609s in his Prema Powerteam machine.

"We made some changes to the car, and obviously we got to look at the data from yesterday, and I knew the places I had to improve," said Norris.

"After the race this morning I was a lot more confident and natural, with being able to push.

"I knew after yesterday that it would be tough, especially with Ilott in my group, but overall I felt much more confident in my car and surroundings.

"The team had a great strategy - everything we did all played a part."

In the second group, all but Joey Mawson aped the Carlin/Hitech first-session strategy, and it was Prema's Maximilian Gunther who emerged at the top with two laps in the 1m09.4s bracket to take front-row starts for both races. 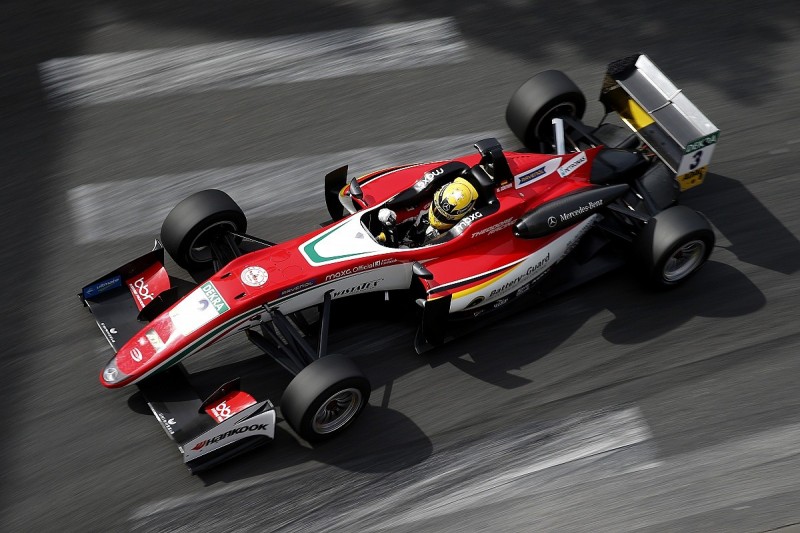 Motopark's championship leader Joel Eriksson was languishing in fifth place going into his final lap, but the BMW junior pulled a 0.2s improvement out of the bag as the chequered flag flew to take two second-row grid positions - for both races he will start alongside Ilott.

Hitech duo Ralf Aron and Nikita Mazepin made a step forward and will share the third row for race two, and the fourth rank for the Grand Prix.

Harrison Newey also progressed and qualified his Van Amersfoort Racing car on the fourth row for race three; the third row for the GP.

Jake Hughes has fourth and fifth-row starts in his Hitech machine, just edging out Carlin's Jake Dennis on both grids.

Another Carlin runner, Ferdinand Habsburg, will start on the fifth row for both races.

Mawson took a sixth-row position for race two, but his second-best lap was only a fraction slower so he starts alongside VAR team-mate Newey on the third rank for the GP.

Daruvala was the only casualty, swiping the wall at Foch and causing a brief full-course-yellow period while his car was craned away.