David Beckmann inherited victory in a wet FIA Formula 3 Championship reversed-grid race at the Hungaroring after Bent Viscaal was robbed by a double penalty and a late safety car.

MP Motorsport driver Viscaal charged in spectacular fashion from ninth at the end of the first lap to take the lead from Red Bull Junior Dennis Hauger on the 13th of 22 tours.

By this stage Viscaal had already incurred a very debatable five-second penalty for a collision with Igor Fraga on the second lap at Turn 12 as they battled for ninth.

Fraga tried a move down the inside, but ran wide, allowing Viscaal to reclaim the line. As Fraga tried to regain the track, the two made contact, the damage sending Fraga to the pits and out of the race.

Once he was into the lead, Viscaal had already extended the required five-second margin over Hauger within three laps.

Hauger had taken the lead from poleman Beckmann early in the race, the Hitech GP man clearly having superior grip at this point, before his pursuers began to come back at him.

Beckmann made his move on Hauger into Turn 1 at the beginning of the 17th lap - it was late, and there was slight contact as Beckmann tapped the rear of Hauger, sending the Norwegian into a slide.

Championship leader Oscar Piastri then made an audacious pass on Hauger into the final turn to claim third on the road, and the Prema Racing-run Renault F1 Junior began hunting down Beckmann.

Try as he might, Beckmann could not get the gap to Viscaal under 6s, and looked to be vulnerable to Piastri, but then came the second hammer blow for Viscaal. 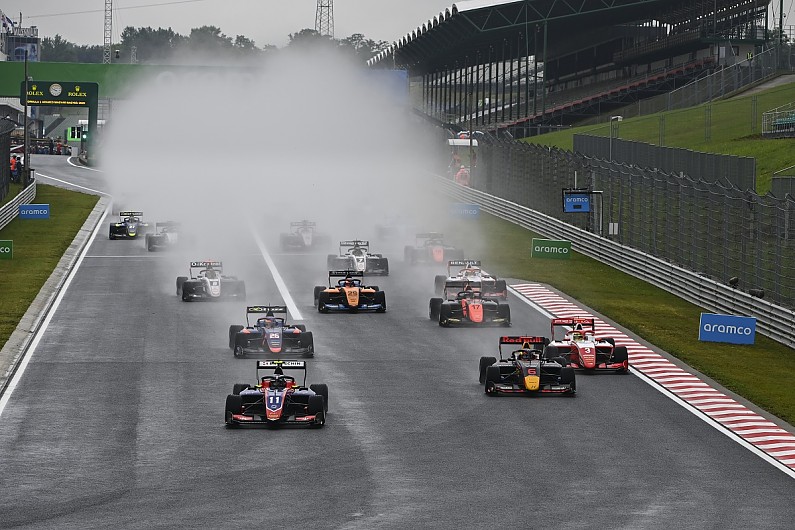 This five-second penalty appeared far more clear cut, and was awarded for passing Logan Sargeant for fourth off the track on the exit of Turn 3 just after the race went green on lap 10 following a safety car.

Sargeant himself was given a five-second penalty in Saturday's race for gaining an advantage while off track - gifting Viscaal a podium position.

Even with a cumulative total of 10s worth of penalties, that appeared easily enough for Viscaal to finish third behind Beckmann and Piastri as the race entered the final three laps.

But then Federico Malvestiti crashed at the exit of the fast Turn 4 and bounced back onto the track, prompting a second appearance for the safety car and the race to finish under caution.

Beckmann therefore took victory from Piastri and Hauger, while a furious Viscaal's time penalty slotted him into 17th position.

Pourchaire's team-mate Alexander Smolyar, taken out at the first corner on Saturday after qualifying on pole, stormed through from 27th to seventh, ahead of Sebastian Fernandez (also ART), Enzo Fittipaldi (HWA Racelab) and Alex Peroni (Campos Racing).

Carlin-run front-row man Clement Novalak spent much of the race in the top four before losing grip and plunging down the field, while the first safety car was caused by Liam Lawson parking his Hitech machine after losing power - the second successive day that a mechanical failure for Lawson caused a caution.