The 16-year-old Frenchman started third on the grid, but moved in front when the two front-row men collided at the first corner.

It was Pourchaire's ART team-mate Alexander Smolyar who started from pole, with the Prema Racing machine of Logan Sargeant alongside.

On a damp track but with the field on slicks, Smolyar got the best start and Pourchaire also moved in front of Sargeant, but the American appeared to get caught out by the slippery track while braking for Turn 1.

Sargeant ran across the grass on the inside, and spun backwards before his left-rear wheel hit the right-front of Smolyar, causing enough damage to force the unfortunate Russian out of the race.

Frederik Vesti tangled with Calan Williams in avoidance, with Olli Caldwell also caught up, while championship leader Oscar Piastri tripped over the car of Williams, bumping back onto the track in second position.

After a safety car, Piastri began hunting down Pourchaire, despite having a broken floor on his Prema car. Sargeant also had damage, but somehow clung on to third from Lawson, despite twice running off track.

On the fifth lap of 22, Lawson's motor let go on the approach to Turn 1, with the close-following Sebastian Fernandez, Bent Viscaal and Max Fewtrell all locking up on the oil and running wide. 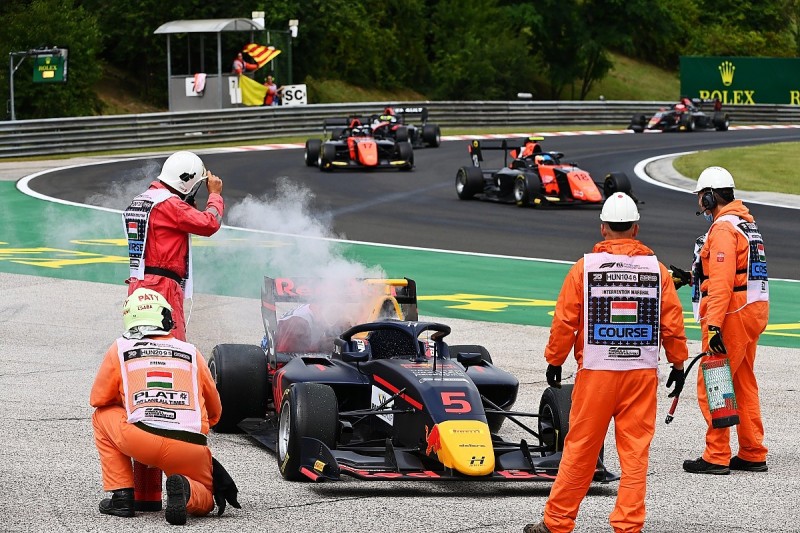 The Hitech GP car of Red Bull Junior Lawson then caught fire before he pulled off on the outside of Turn 2, and the race was halted while marshals cleared up the oil slick.

Prema pair Piastri and Sargeant plus ART driver Fernandez all had new Pirelli tyres fitted during the stoppage due to incident damage - as they are allowed to under the regulations - but the new rubber could not make up for the state of the hobbled Prema weapons.

Reigning German Formula 4 champion Pourchaire simply sailed into the distance, while Piastri was able to hold off Sargeant despite running wide at the final corner with six laps to go.

The Prema duo looked likely to come under threat from Richard Verschoor - the 2019 Macau Grand Prix winner passed MP Motorsport team-mate Bent Viscaal and then Fernandez after the restart and looked to be making strong progress.

But Verschoor's pace then faded, and he could not prevent fellow Dutchman Viscaal from passing him around the outside of Turn 2 on the final lap, a move that put Viscaal on the crucial inside line for the following Turn 3 kink.

Fernandez was another to suffer on pace, but once he was down in sixth he kept his composure to fend off Alex Peroni (Campos Racing), Dennis Hauger (Hitech), Clement Novalak (Carlin) and David Beckmann (Trident).

Ferrari junior Enzo Fittipaldi and Renault F1 protege Max Fewtrell were in points-scoring positions before their races were scuppered.

Fittipaldi had just pulled off a brilliant double pass on Peroni and Fewtrell around the outside of Turn 2 when he was given a stop-go penalty for pulling out of the pitlane fast lane during the red flag, while Fewtrell reported steering problems as he dropped to 11th.

Several hours after the race finish, Sargeant was handed a five-second time penalty for gaining an advantage by running off track during his battle with Lawson, dropping him to sixth and promoting Viscaal to the podium.