Luca Ghiotto scored a stunning pole position for the Formula 2 feature race in Barcelona late on in qualifying, despite complaining of car issues.

Ghiotto topped the session after the first round of rapid laps, but complained of a "misfire" and something "weird" happening in his gearbox over the radio after he had ran wide at Turn 9.

That was allied to a problem where he couldn't adjust his brake bias because the controil was stuck.

His Virtuosi Racing team engineer Geoff Spear asked Ghiotto to focus on what could be improved on the car, and sent the Italian back out with little time to spare in the session. 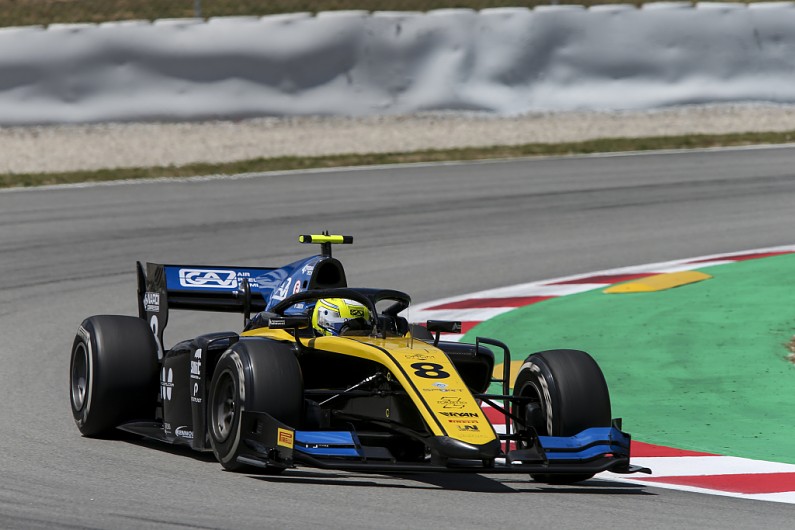 As his rivals watched on or completed in-laps, Ghiotto dragged his car aggressively through his last lap in a brilliant display of forceful driving, ousting points' leader and Williams Formula 1 junior Nicholas Latifi from the pole position by 0.181s at the last.

Latifi himself complained of a brake issue and said that his lap could have been "much better" on the radio, having looked like he would take pole before Ghiotto's mighty late effort.

Renault Formula 1 junior Guan Yu Zhou delivered his best qualifying to date since stepping up from European Formula 3, taking third and ensuring that Virtuosi has two cars in the top three. It marks an excellent rebound as both drivers made mistakes in the Baku weekend previously.

Nyck de Vries was another late improver for ART Grand Prix, even forcing Prema Racing's Sean Gelael off the circuit to maintain track position for his late flying laps.

After overtaking de Vries in both Baku races, Jack Aitken had take a loss and settle for fifth behind the Dutch driver, after his strategy failed to pay off.

Aitken went early with his last flying laps to get a clear track without traffic, but it meant he had to watch on as others headed the Campos Racing driver late in the running.

Callum Ilott had his best F2 session since graduating from GP3 in sixth, at a track where his Sauber Junior Team were anticipating a struggle.

He gave Trident its best qualifying result of the season so far in an impressive display for the driver who struggles for funding.

Dorian Boccolacci ran in the gap as his Campos team-mate Aitken had done, and took ninth, ahead of Ferrari junior and Prema Racing driver Mick Schumacher.

Aitken and Boccolacci were later found to have used a "undeclared rear part of the wooden plank during free practice" and were each awarded three-place grid penalties, demoting Aitken to eighth and Boccolacci to 12th.

The top 10 times were separated by just half a second, with the top 16 all within a second of Ghiotto's pole lap.