All Formula 1 drivers are peak-condition athletes, much of their training focussed on strengthening neck muscles to withstand the sheer forces produced by the car's phenomenal cornering and stopping ability.

However, even the best prepared face a new challenge at Zandvoort, thanks to the non-stop nature of the circuit, and its many high-speed corners.

Drivers have sampled the layout in simulators, but won’t really know about the forces they’re facing this weekend until they’ve sampled the track for real in practice.

And while teams have run all the numbers, until FP1 gets underway the engineers won’t know exactly how much grip the track surface has, how it interacts with Pirelli’s three compounds, and how the overall grip level changes as rubber goes down. Certainly, early on Friday it is expected to be slippery – but it will improve, and speeds will rise.

“The bit that's really hard to estimate is exactly what the grip level of the track is going to be,” says Aston Martin performance director Tom McCullough.

“There's sand on the track and so on. You saw the safety car running around on Thursday, there were plumes of sand, the car was drifting everywhere.

“They've been out with a machine trying to clean the track, but the machines that they were using weren't the ones with the really good washing, they were just sort of trying to scrub it off!

“I think the track will be quite low grip to start off with, but by the time we get to qualifying there have been a lot of laps on there.” 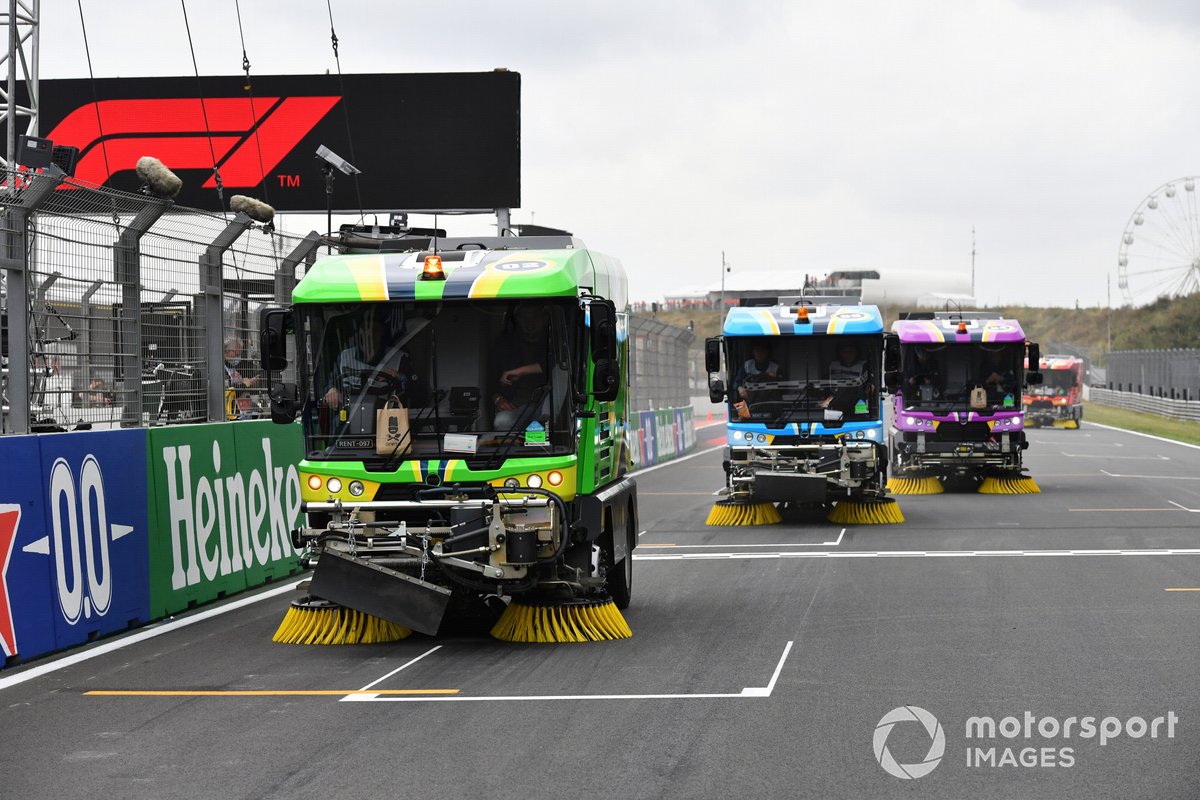 Track cleaning at Zandvoort on Thursday

Many circuits have standout corners where drivers experience high g-forces, but what makes Zandvoort different is the number of peaks, and how soon they come one after another, providing little respite.

“It's more about how many times we hit 5-5.5g than just hitting 5g,” says Ferrari's Carlos Sainz Jr.

“If you hit it once in a circuit, it's fine. Hitting it four or five times like we're about to hit this weekend, it's going to be potentially tiring for the neck, for the whole body, different to what we are normally used to. And an exciting challenge.

“It looks like the two high-speed corners in Sector 2 and the last two corners are the highest g-force.

“Turn 1 should also be high g-force, Turn 2 should be high, and Turn 3 with the banking. So we're going to have a lot of corners on high g. And with new tarmac it should be high grip also.”

His thoughts were echoed by AlphaTauri's Pierre Gasly.

“I think it's gonna be tough physically, because you don't really have a lot of straight lines,” he says.

“From Turn 3 to Turn 7 is basically not straight, you're always curving, cornering. The main straight is pretty short, and there’s a lot of banking, a lot of Gs.

“You're never really straight. So we expect it to be quite physical.” 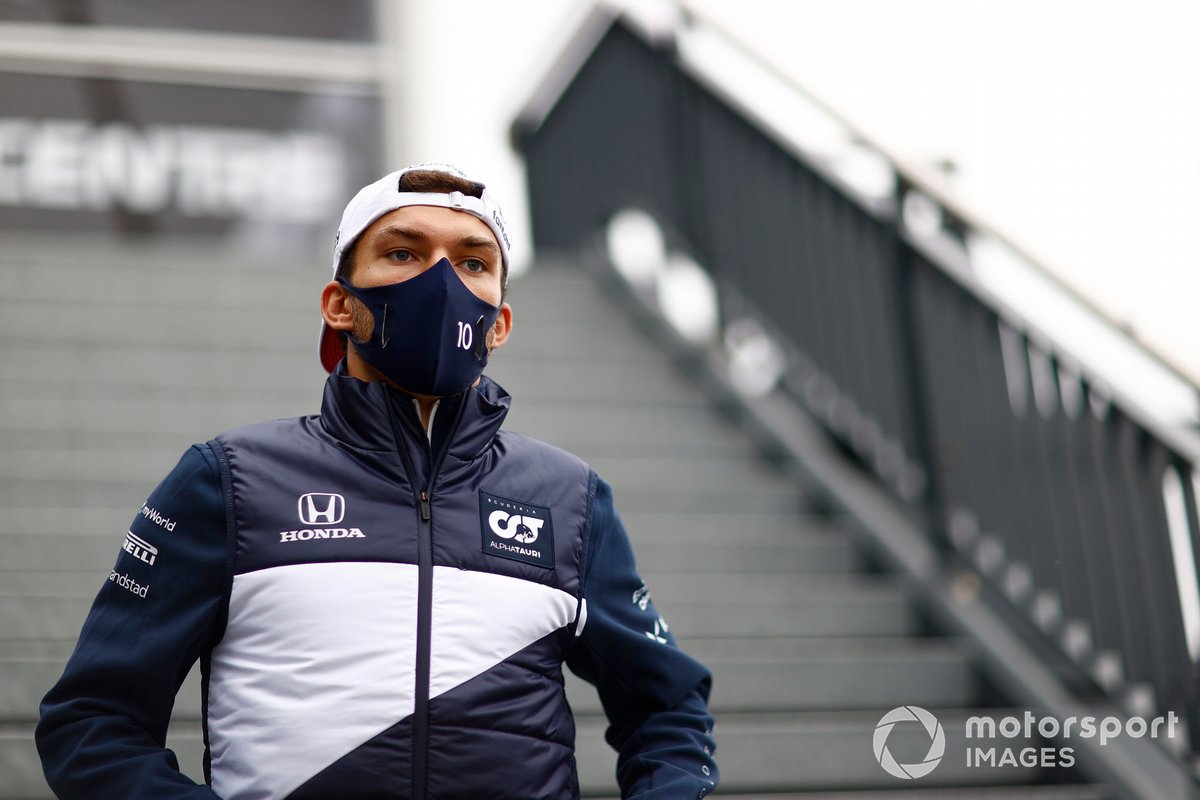 One intriguing aspect of Zandvoort is the extra challenge provided by the vertical loadings that drivers will experience in several places.

“I think the speeds coupled with the camber puts a different kind of force on your body in some of these corners,” says McLaren's Lando Norris.

“It's not just like left or right, it's also a bit of a compression. So that also adds to it.

“There's not a lot of time for breaks, it's constant cornering through the majority of the track, with a couple of straights – the start/finish, and maybe the one down into the chicane.

“It's similar to Mugello, the corners are very high speed, but also very long. So it's not just a spike – you spike, but you hold it for a good couple of seconds, or maybe not quite so much.

“It’s just a lot of very high speed corners, and especially when you add this compression and camber section into it, then it kind of doubles the effect.”

Norris says that unusually high vertical loading will be the real novelty for the drivers.

“It's not something you get much of in an F1 season. And it's something that is extremely difficult to train for, a compression of such a sort.

“It was the same for me in Daytona with the 24 Hours in 2018. The first few laps you do it’s very weird, because the load goes vertically through your body, and kind of pushes you down, more than just left or right.

“And also your eyes have to adjust to this playing field... It just takes a few laps for your mind to kind of re-adjust. But after a few laps it kind of becomes normal.” 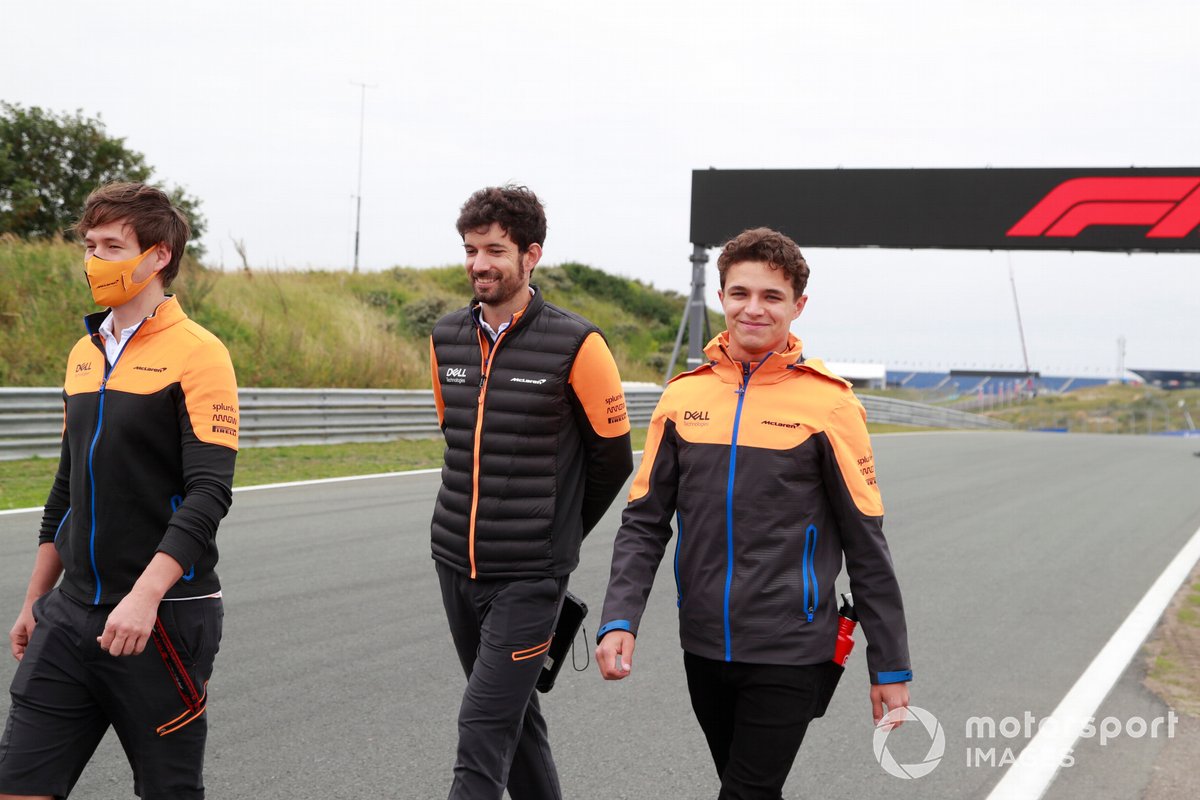 The highest peak loadings will be seen in qualifying, and drivers won’t replicate those lap times and forces in the race. However, 72 laps on Sunday will be quite a distance, especially if there are no safety car periods to provide a break.

“Obviously you won't ever pull as much as then you do in qualifying with the tyres and fuel load and things like that.” says Norris. “But like I said, there's not a lot of time to relax and to breathe on the straights.

“You are constantly cornering. A lot of them are quite medium and high speed corners. It's a short lap, and that just makes the amount of repetitions you do very high. And that always adds up to the fatigue.”

As noted, all the drivers are very fit, and will take this weekend’s challenge in their stride.

“What's happening in the season is also because you drive a lot that you kind of maintain fitness,” says Gasly. “But at the start of the year, usually Barcelona testing is quite brutal, especially after a couple of months out of the car.”

It’s thus unlikely that anyone’s actual performance on track will be impacted. Nevertheless, some drivers might be feeling it a bit by Sunday evening...