After a much-hyped launch with a Formula 1 show car, Red Bull went low-key for its real RB18 reveal as it rolled out of the pits in testing.

And while much of the attention of the public's first look at the team's true 2022 car revolved around the very aggressive sidepods, there are actually some other equally significant areas of innovation that stand out.

Some of the solutions may not be as obvious to the naked eye as the sidepods in how much of a step change they are, but they could well prove to be critical in the outcome of the F1 battles to come.

The RB18 beam wing a standout design feature, as Red Bull is the only team to have taken this direction, with the rest of the field favouring a solution that's more in line with the dragonfly-like arrangement seen on the show car and renders produced by FOM last year.

The alternative fielded by Red Bull has two elements stacked on top of one another, rather than in series, with the lowermost elements cranked up to serve a much higher angle of attack. 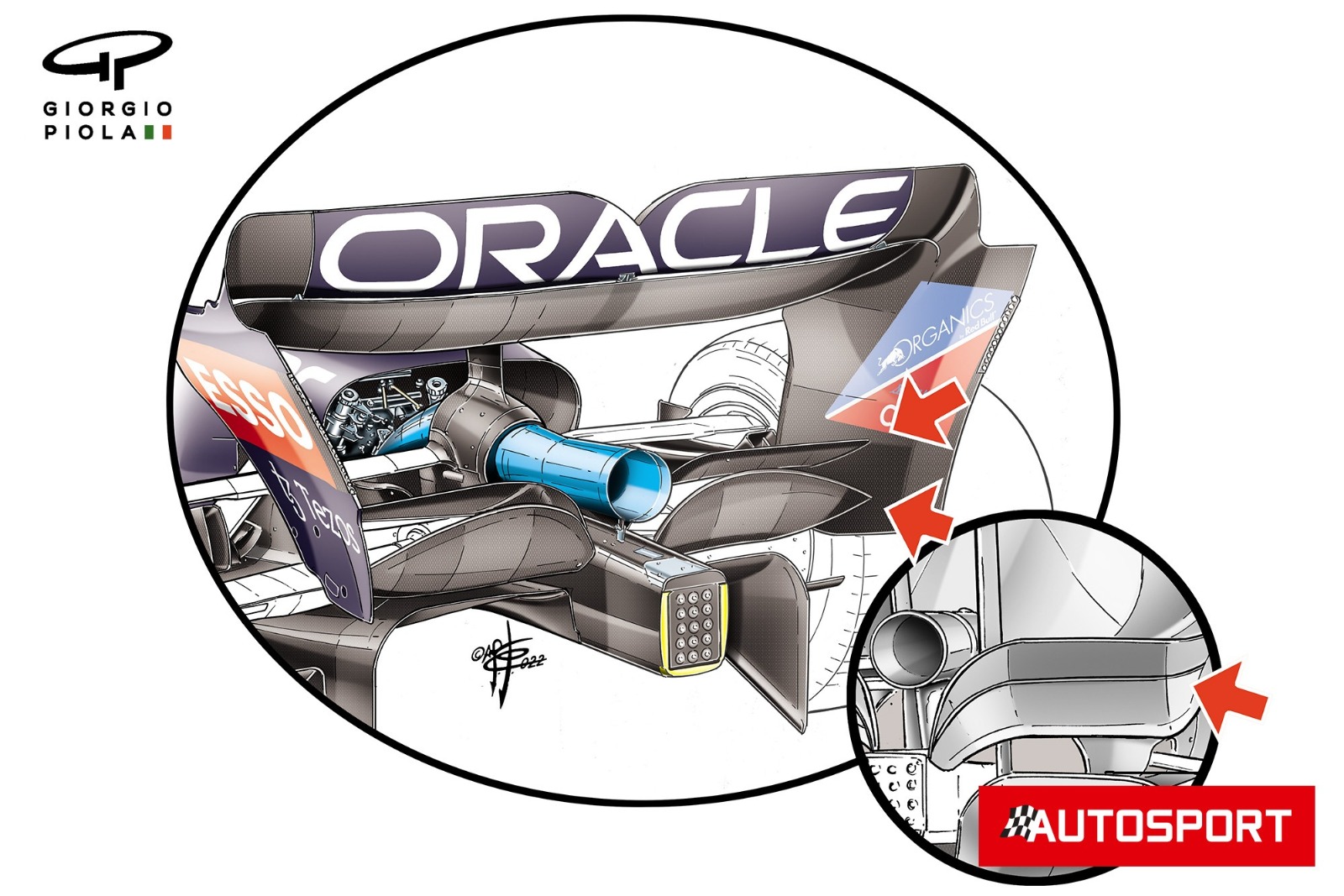 This serves to enhance its interaction with the diffuser, whilst the upper element acts as an intermediary flow conditioner for these aerodynamic structures and the upper rear wing elements.

Prior to its expulsion in 2014, the beam wing had been a powerful tool for teams in connecting and tuning the flow structures created by the diffuser and rear wing, and it seems Red Bull is looking to continue where the designs previously left off.

Red Bull, like McLaren, has flipped its suspension choices: switching from a push-rod front and pull-rod rear, for a pull-rod layout at the front and push-rod at the rear. This is extremely interesting when it is considered that Red Bull, and moreover Adrian Newey, are considered the architects of the previous rear suspension revolution.

It cannot be forgotten that, having made the switch to pull-rod rear with the RB5 in 2009, it became acknowledged as the best solution and unilaterally adopted up and down the grid thereafter.

The decision to revert to a push-rod rear is largely driven by aerodynamic factors, as it becomes more critical to position the suspension elements out of the way of the rising floor section. The value of doing this has been increased by the new regulations surrounding the underfloor and diffuser.

Making this change does place the weight higher, but this is likely considered a fair compromise, as it also results in easier access to the inboard suspension elements should setup changes be needed. 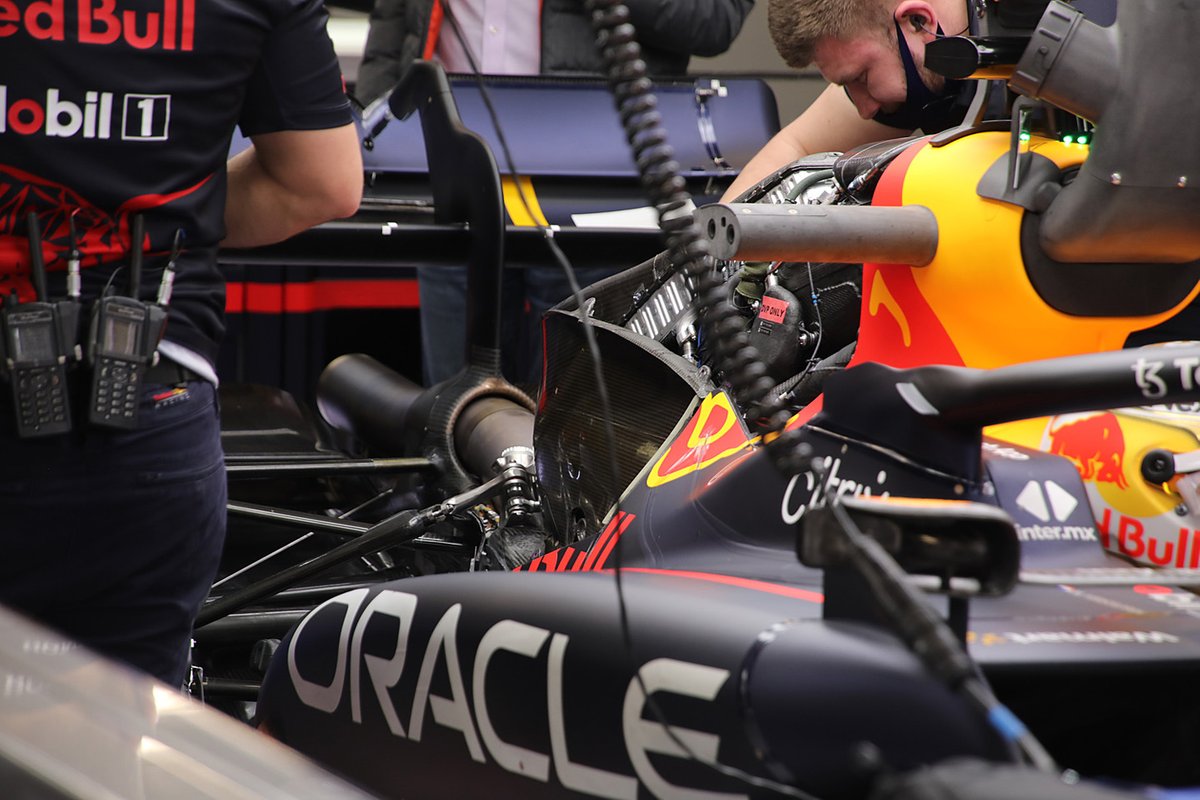 At the front of the RB18, a switch to pull-rod suspension is not the only novelty to discuss.

While the adjustment has been moved to a more central position on the rod for ease of access for the mechanics (blue arrow, inset), it's the wishbone layout that is also intriguing.

Like the RB16B, one of the wishbones features a chassis intersecting mono-arm. However, like the pull-rod inversion, this has also been flipped on its head. So rather than being the front lower arm, it's now the front upper arm that passes through the chassis bulkhead (red arrow).

The forward upper arm is also mounted as high as possible, where it intersects with the chassis. The rear is slightly offset from it at the outboard end, whilst it's mounted much lower at the chassis end too.

These are choices that will have some aerodynamic implications in terms of the airflow's route downstream. However, this multi-link arrangement appears to have more to do with a desire to promote some anti-dive qualities, which will assist in controlling the car's front end under braking. 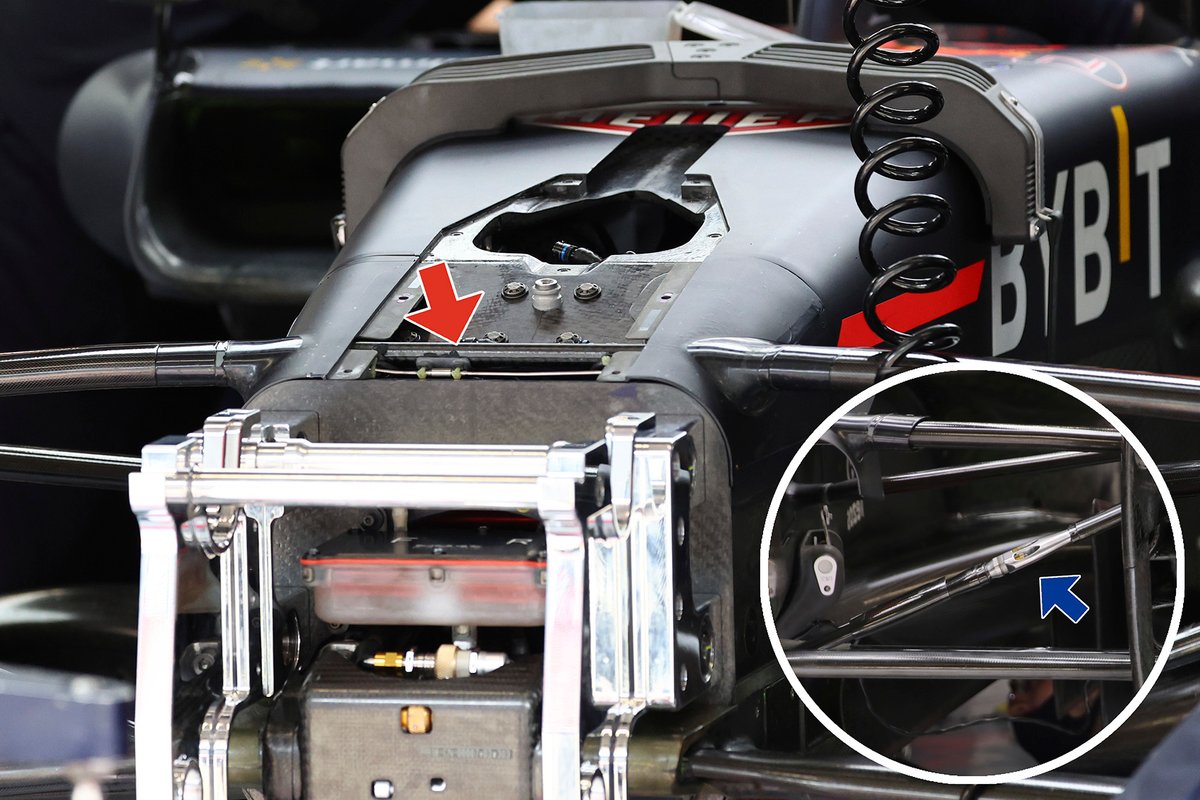 The steering arm is aligned with the front lower leg of the wishbone in order to garner an aerodynamic relationship between the two, whilst the rear leg is offset like the upper, albeit in a much less aggressive way.

Another area of intrigue had arisen in the placement of a narrow slot in the front face of the RB18's bulbous under chassis splitter (red arrow).

As with other teams, who also have a similar slot, it's suspected that it provides cooling to components that are housed internally.

In the majority of cases, this could be expected to be electronics but we must remember that Red Bull also opted to house its auxiliary oil tank in this position during 2021 (right-hand image).

Nonetheless, there was a visible small cylindrical cooler attached to the inlet when the car was wheeled back into the garage (blue arrow, inset), which also provides the support brackets upon which the brake duct blowers are mounted to help cool the brakes (green arrow). 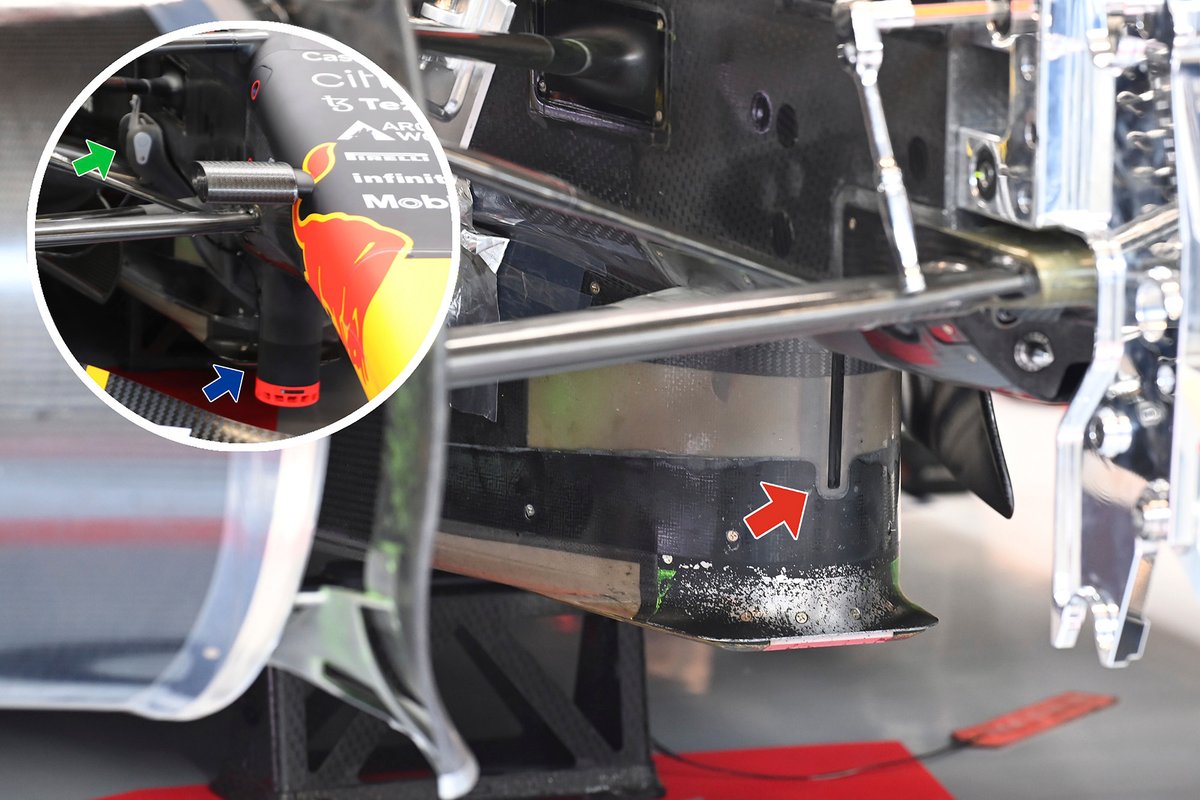 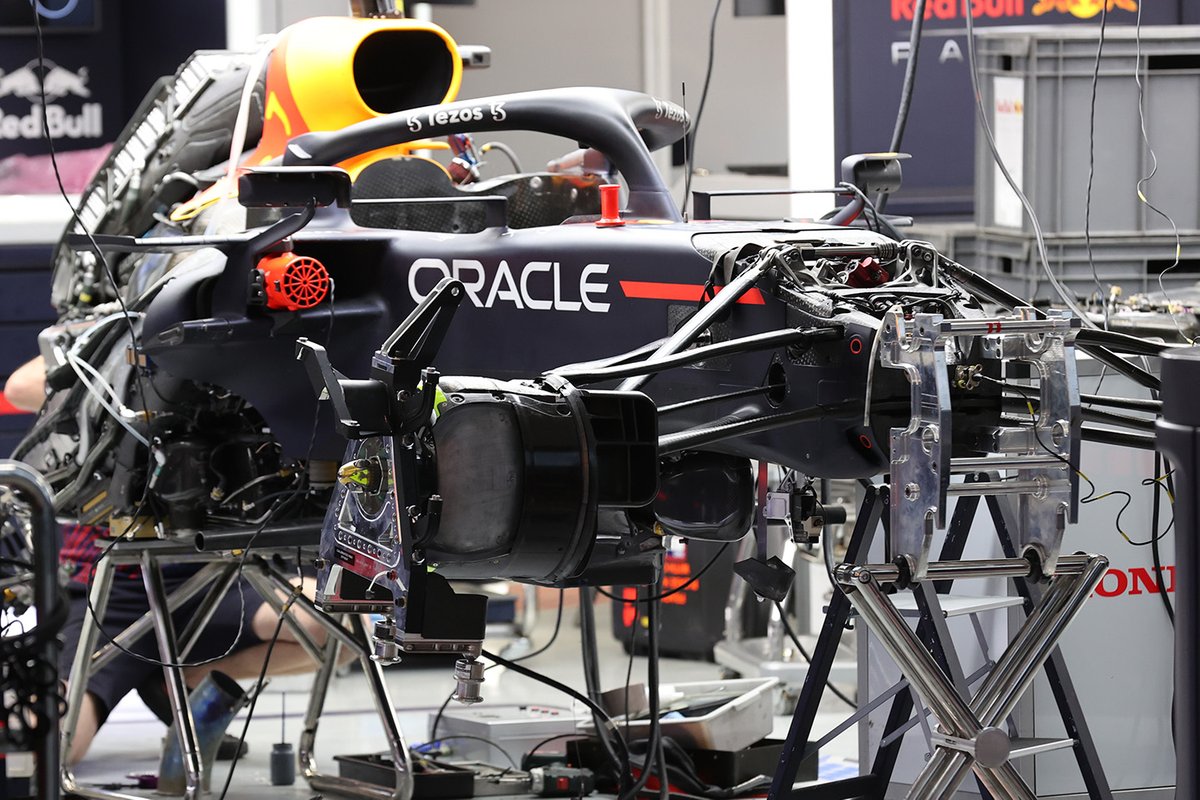