McLaren driver Norris crashed heavily at Eau Rouge after spinning during his first flying lap in Q3, resulting in a red flag and a 40-minute suspension of the session.

Norris walked away from the crash, but has since been taken to hospital for a precautionary x-ray of his left elbow after he was seen holding his left arm.

Vettel had told his Aston Martin team just moments earlier over team radio that the session should be red flagged due to the heavy rain, and was left fuming when he heard that Norris had crashed.

After qualifying, Vettel is known to have bumped into race director Masi in the paddock and discussed the incident.

“I think Michael is not proud of what happened either,” Vettel said in the TV pen after qualifying.

“It’s always easy to play Captain Hindsight. But I think we need to find a way that we listen more to the information that we have.

“Inside the garage, it’s very limited, because it’s like looking out of the window. But three kilometres that way, I have no clue what is going on.

“When I went down to Eau Rouge and came up the hill, it was a lot of water and I was calling for a red flag. I think the truth is, the session should not have started at all. 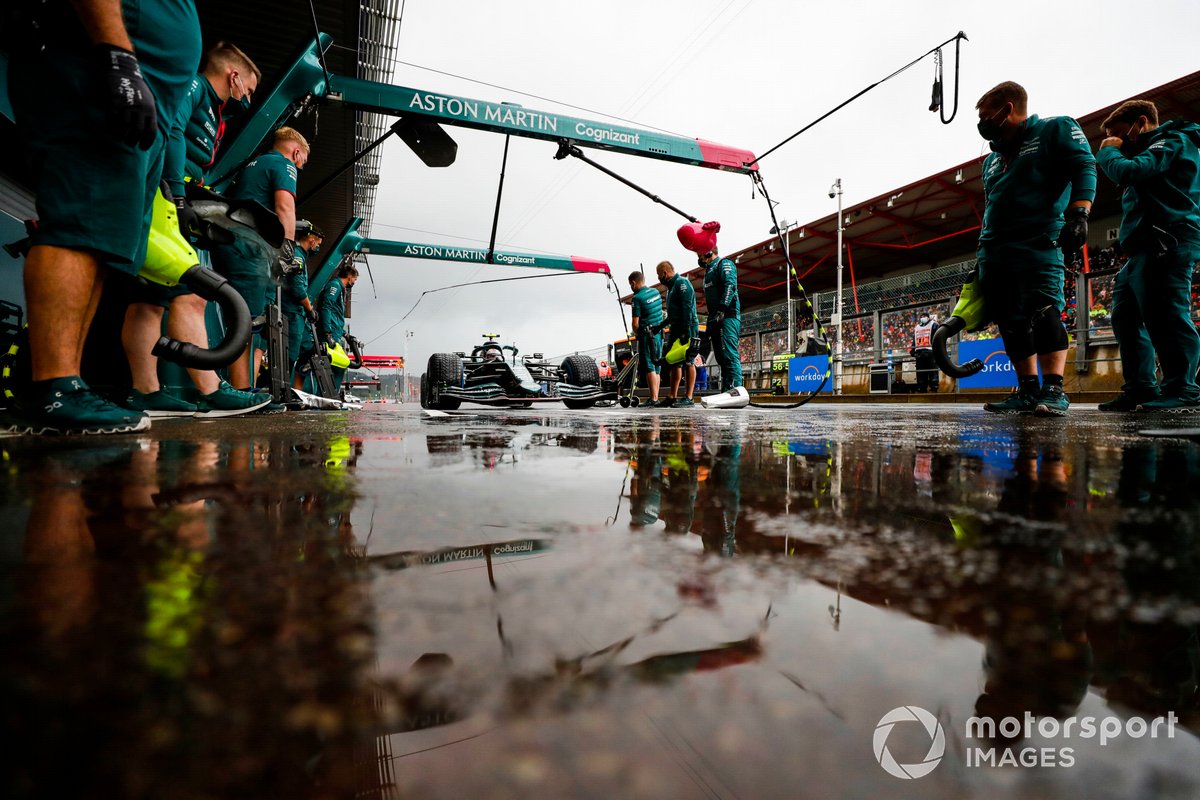 Sebastian Vettel, Aston Martin AMR21, comes in for a stop during Qualifying

The crash marked the second major incident of the weekend at Eau Rouge after a six-car collision in W Series on Friday, reopening the debate about the safety standards at the corner.

Changes are planned for the Eau Rouge/Raidillon complex ahead of the 2022 race as part of Spa’s redevelopment programme.

But Vettel felt it was important for more information to be accounted for when making decisions, saying it was wetter in Q3 than at the start of qualifying when Q1 was delayed by 10 minutes.

“The trouble is, of course we are in control, and you can always say well if you feel unsafe, box,” Vettel said.

“But it’s sort of a weird situation because everybody is in the same position, and you don’t want to get kicked out, you want to progress. So that decision shouldn’t be really and entirely up to us.

“We delayed the session in the beginning when there was less water, so I don’t entirely understand why we did not just not start the session.

“As I said, it’s always easy afterwards, but the main thing is it doesn’t happen again.”

Following the red flag, Vettel qualified fifth for Aston Martin, but revealed he made an error on his quickest lap that could have put him further up the grid.

“I went wide in Turn 8 and actually off the track, so I think Daniel [Ricciardo] was no problem to get him, and we should have been maybe a little bit higher up,” Vettel said.

“So I’m very happy for George [Russell], but I think that’s maybe where we could have been as well, a little more in the mix.

“But I think it’s a great result for us, and I’m happy to start the race in a decent position.”