© 2021 Motorsport Network. All rights reserved.
TV Tickets Fashion Giorgio Piola Jobs
Previous / Azerbaijan Grand Prix Driver Ratings Next / What is the Mercedes magic button and what does it do?
Formula 1 / Azerbaijan GP News

Sebastian Vettel hopes his second-place finish in Sunday’s Azerbaijan Grand Prix can help the team build momentum after a “very rough start” to the 2021 Formula 1 season.

Four-time world champion Vettel linked up with Aston Martin over the winter following his exit from Ferrari, but failed to score any points in his first four appearances for the team.

A big breakthrough came in Monaco when he was able to finish fifth, but Vettel put in his best display yet for the team by battling from 11th on the grid to finish second in Baku on Sunday.

Vettel managed to lead the race after a long first stint on the soft tyres, allowing him to overcut two cars before fighting past Charles Leclerc and Pierre Gasly on the two restarts, giving him P2 at the chequered flag.

Vettel conceded after the race that while he had felt strong through practice and qualifying, he never expected to reach the podium.

“I didn't have many expectations, to be honest,” Vettel said.

“I knew that the whole weekend I felt good, so I knew we could score some points, but I certainly didn’t expect second and the race was really strong.

“Obviously I’m very happy with P2 and [for] the team, I think it’s great for us. We had a very rough start to the season. We expected quite a bit more after such a strong year the team had last year.

“I can’t wait to get back to have a couple of drinks with the guys.” 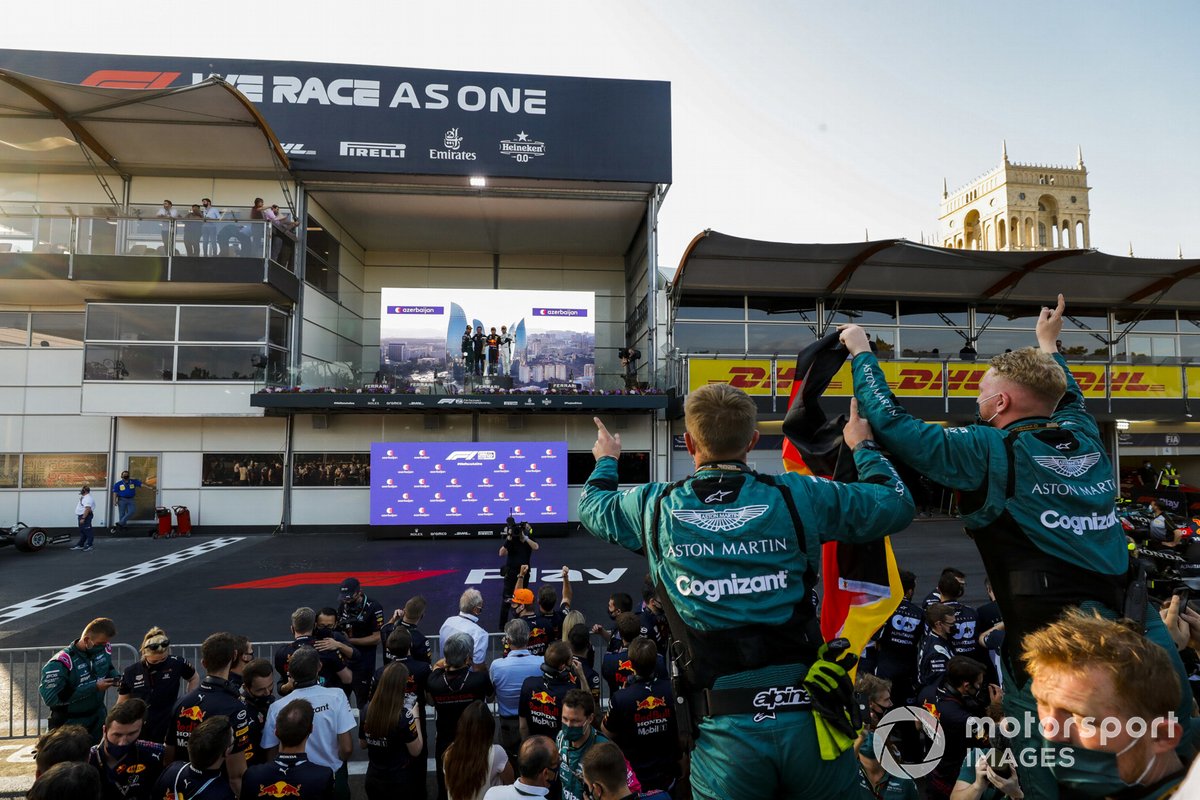 Under its previous Racing Point guise, the team had fought regularly at the front of the midfield through 2020 and took a race win at the Sakhir GP, only for the 2021 downforce cuts to cause it to drop down the order.

Vettel’s result almost doubled Aston Martin’s points tally for the season so far, but was not enough to stop it slipping behind AlphaTauri in the fight for fifth in the constructors’ championship.

P2 marked Vettel’s best result since the 2019 Mexican Grand Prix, as well as matching his best finish in Baku from the inaugural race in 2016.

Vettel said he took more enjoyment out of fighting for positions further up the field, sensing there was a big opportunity for the team as he gradually rose through the field.

“It’s always nice if you join a new team get together good results,” Vettel said.

“I sat here on Thursday and said that I’m in it to win, and I enjoyed the race because I was getting closer and closer to spots that I enjoy more and more.

“Obviously when I was P4, I knew that’s good points for the team and for myself, but as soon as we were in the podium ranks, I really thought that we can have a say if something happens.

“I think I felt quite comfortable in the car all weekend, which for sure doesn’t hurt, so hopefully we can carry that momentum into the next couple of events.

“France will be a normal track so we will see where we are, but hopefully we can fight for points a little bit more regularly.”

Vettel revealed that he felt in such good shape that he opted not to get out of his car during the lengthy red flag wait.

“I stayed in the car, I wanted to stay in the zone and not distract myself, to be ready,” Vettel said.

“I felt that we obviously did the best we could today. It’s quite comfortable in my car – and I’m one of the only drivers that doesn’t pee in the car, so I can stay in there for longer!”