Vettel: Ferrari has identified weak areas of its 2017 F1 car

Ferrari has identified the weak areas of its 2017 Formula 1 car and has a good understanding of how to address them to maintain its title challenge, says Sebastian Vettel

The Scuderia has produced its most competitive car in the V6 era this season, enabling it to challenge Mercedes for the constructors' championship with Vettel leading Lewis Hamilton in the drivers' standings.

The two teams' form has ebbed and flowed throughout the season, with Ferrari coming out on top most recently at the tight-and-twisty Hungaroring before F1 paused for its summer break.

That victory followed a run of races that suggested Mercedes had gained the upper hand in the development race, but Vettel said Ferrari knew what areas it needed to address to keep up its charge.

"We've been competitive every track where we've gone," says Vettel.

"It's true that Mercedes has here and there been more competitive and we were a little bit behind.

"It's normal from track to track there's a bit of a difference.

"For drivers, some tracks we like more than others so it's the same for the car.

"It's normal it's up and down but that's not our target - we want to be the best on every track we go. That's not the case yet but we're working on it.

"We have quite a good understanding of what the car needs.

"Now we have the time to look into a couple of things with a bit more peace and calm and try to improve."

Vettel praised Ferrari's efforts with this year's challenge and added it was a good sign that rivals were copying its ideas.

"If you look at the last three years, this year is a different story and we keep progressing.

"It's testimony of good and hard work and the achievement that has gone into this project and we keep pushing flat-out." 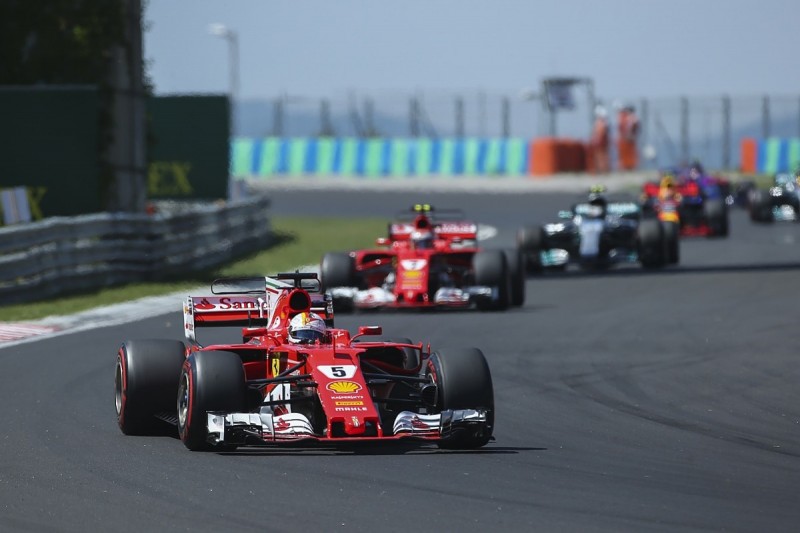 Ferrari's one-two in the Hungarian Grand Prix helped the team close to within 39 points of Mercedes in the constructors' standings with nine races to go.

Vettel extended his lead over Hamilton to 14 points and is confident he and his team have the resources and capabilities to fight until the end.

"The team is in much better shape this year and if you have the right results coming your way, you start to pick up some momentum," he said.

"It's up to us to keep it going. I'm quite confident we have the right people.

"We know how to build a strong car and we have improved the engine this year massively so everything is going in the right direction.

"I'm confident we'll be there and fight for big points."

Honda unsure which upgrades it can introduce to its F1 engine