While his team-mate Daniel Ricciardo went fastest in every session before taking pole, Verstappen - who had been second on Thursday - missed qualifying completely as a result of a crash in the final minutes of Saturday morning practice.

He conceded that the accident was "avoidable" and said "it all felt very easy" up to that point.

"You also saw in qualifying how easy it was for Daniel," Verstappen added. "It was the same with me."

The crash happened just after Verstappen had passed the slow-moving Renault of Carlos Sainz Jr between the two sections of the Swimming Pool complex.

"I got a little bit caught off guard with the slow car, but that's not an excuse," Verstappen explained.

"It's all happening quick at that stage, you get a little bit distracted, and I guess I just turned a little bit earlier than normal. Or clearly turned in a bit earlier."

He was on a faster lap at the time but conceded he should have been more cautious given it was not a qualifying session.

"In the end it's third practice, so it doesn't really matter then," said Verstappen.

"We always do this. You try and drive as many quick laps as possible to build it up a bit for qualifying.

"You always take risks. But of course it's always easy to say afterwards: we shouldn't have gone out." 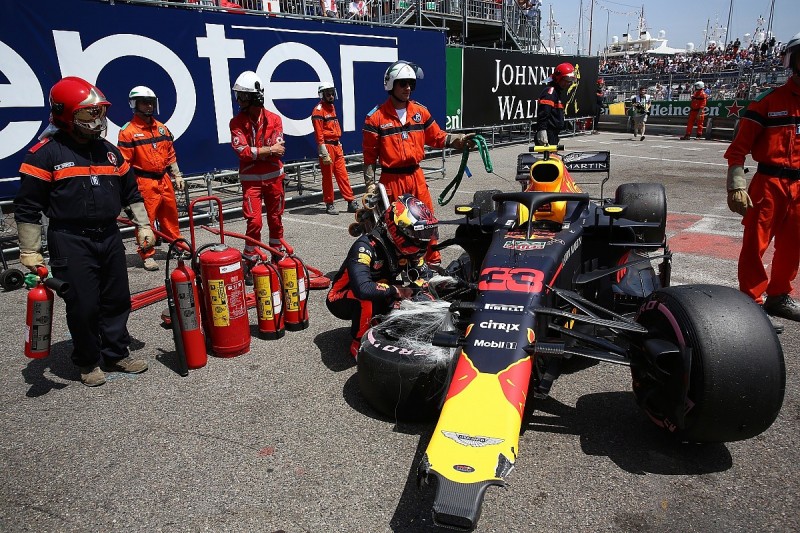 Red Bull almost managed to get Verstappen's car fixed in time for qualifying, before discovering a gearbox leak at the last moment.

"All that seemed to be going well. Only when they started the car, they saw it leaked on the left. There was a crack in the gearbox," Verstappen explained.

"When I heard about the gearbox I think they only had 15 minutes, then you know it's not going to happen.

"You're hoping for a red flag or something during qualifying, so it gives you a bit more time."

Verstappen's disastrous Saturday in Monaco followed a run of incidents in the early part of the 2018 F1 season, but he insisted he still had the Red Bull team's full support.

"The team will always be behind me, in good or bad times," he said.

"It goes either way you know, last year with a lot of engine problems and stuff, I was exactly the same.

"So we just work as a team, you win and lose together."