Max Verstappen labelled the Turkish Grand Prix as a "race to forget" after a poor start, spins and tyre struggles wrecked his Formula 1 victory hopes as he finished sixth

The Red Bull driver had been one of the pre-race favourites after dominating practice and securing a spot on the front row of the grid.

But it all went wrong at the start as a very poor getaway dropped him into the pack, and although he made progress to recover lost positions a spin as he battled Sergio Perez for second forced a pitstop for fresh tyres and effectively dropped him out of podium contention.

Reflecting on a disappointing day, Verstappen tweeted on Sunday: "We had a very difficult race in these tricky conditions and we struggled from the start to the end. It's a race to forget, to be honest."

Speaking to Sky F1, Verstappen later talked about how frustrating it was out on track as the drying racing line minimised the chances for anyone to overtake.

"It is just very frustrating to be honest," said Verstappen.

"I tried to follow Checo [Perez] through that kink and suddenly I just massively washed out and you get on to the green bit. It was a big spin. I tried to keep it out of the wall of course and then flat-spotted the tyres.

"After that, you can quickly catch up with the guys, but you can't pass, as it is just one line around here. And already that line is very slippery so it is super-frustrating. We had to just wait for people to pit or whatever."

"Just following, no grip, trying to survive, so definitely not a great day. But hopefully we will never be in this situation again that it is so slippery." 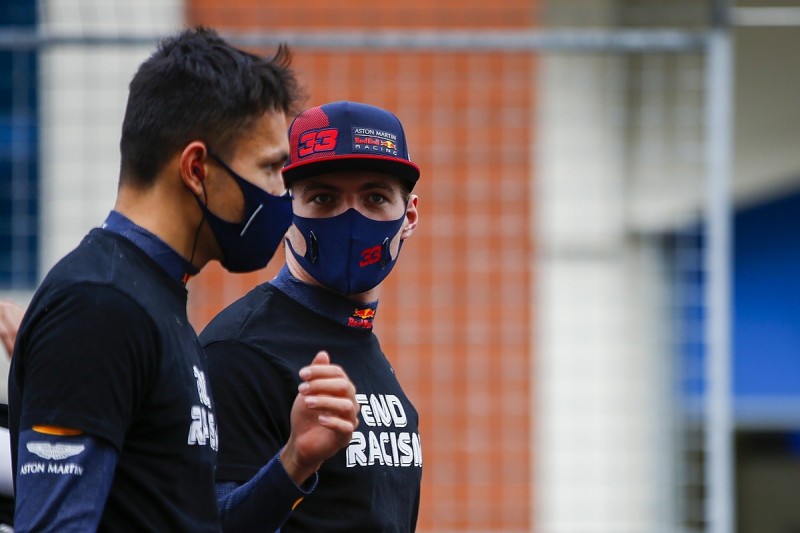 Red Bull team-mate Alex Albon had an encouraging opening phase to the race, as he pushed up to emerge as the main challenger to early leaders Racing Point.

But after his inters started dropping off, his pace fell away and he also suffered a spin - which prompted a pitstop for fresh rubber as he finished one spot behind Verstappen in seventh.

"I feel a little bit confused from the race," said the Thai driver. "From the beginning, our starts were very poor but then we had very good grip and we could make our way through.

"Then, when we boxed for inters, we had incredible grip, and honestly at that point I felt we were in for a win, and I thought everything was going to plan. Then I had a little pirouette but I still felt good and it was a long race and anything could happen.

"But then we put another set of tyres on, the same set of tyres, and we just had no grip and no pace. A lot of head scratching."