Having scored his first success with McLaren in 2008 Hamilton secured a sixth title with Mercedes in seven seasons of the hybrid era after a magnificent wet weather victory in Turkey. He missed out only in 2016, when team mate Nico Rosberg triumphed.

A seventh world championship puts Hamilton equal with Michael Schumacher, who secured his final title in 2004.

"Where does it rank?," said Wolff when asked about Hamilton's achievement.

"I mean he ranked in terms of his record on Michael's level, in terms of driver world championships, and is the absolute record holder in pole positions and race victories.

"Today, he cemented his position among the all-time best sports people in the world."

Wolff said that winning in a season that was hit by COVID-19, with the inevitable restrictions on his lifestyle, was challenging for Hamilton.

"I think it was very difficult, because staying in the bubble within his apartment with [his physio] Angela, and trying to make sure he can finish the championship, is certainly not easy. 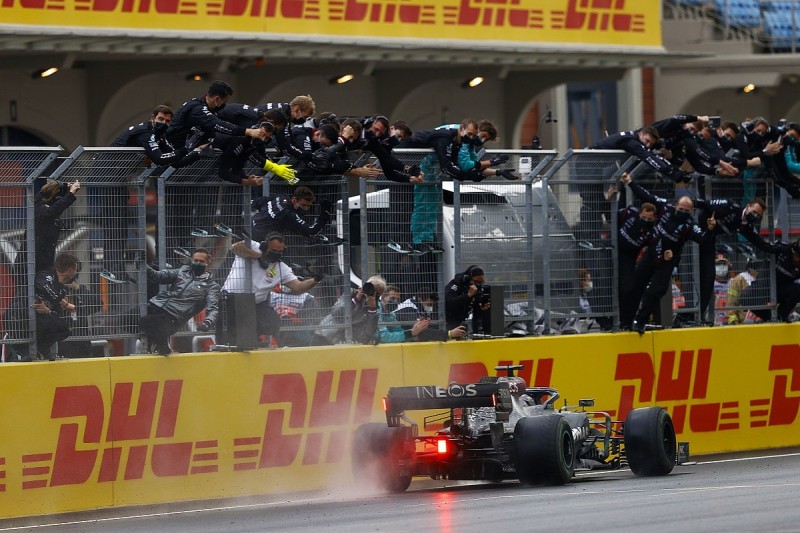 "But it was important, and also today, even when on the grand scheme of things, the absolute result didn't matter a lot for his championship, he stayed hungry, he made no mistakes at all, and it proves how committed he is, holding the discipline to stay at home, and come here and just execute perfectly."

Wolff said the team managed the Turkish race well, keeping Hamilton out on his old intermediate tyres after everyone except his immediate pursuer has changed to fresher rubber.

"We knew the integrity of the tyre was intact, and in the end we were only a little bit worried if rain would hit us, because the tyre was a slick, basically. So we left it open for him to pit.

"We told him we would be ready if he decided to do so, and he went along, and so that was the right combination of strategy calls.

"The tyres went through different phases. You could see that everybody who, most of the people who bolted on a new set of intermediates, and pushed very hard, had graining after a couple of laps only, and from then on, the tyre didn't recover.

"Lance [Stroll] was leading the race solid, and put on the new tyre, which I think at that time was the right strategy, and just dropped back. The same with Max [Verstappen].

"I think what the difference made was that Lewis kept it on the road through the difficult phase at the beginning when our car was not competitive.

"He just stayed there and then eked out, the advantage over our competitors was there when it mattered, and understood the tyre, understood how to drive the tyre to go fast and make it last."