Valtteri Bottas: It was my job to hold up Vettel in F1 Spanish GP

Bottas played a key role in the outcome of the Barcelona event as early race leader Vettel lost valuable seconds behind him, which helped Hamilton close the gap to his Ferrari rival even though he was on the slower medium-compound tyre at the time.

Vettel said after the race that he knew Mercedes would use Bottas to "block" him, and Bottas was happy to have played a role in his team taking another victory.

"I was doing everything I could to keep Sebastian behind and make him lose time, that's how it goes," explained Bottas.

"That was my job and mission at that point. But the pace difference was too big and eventually he got past.

"But I definitely helped the team today. I hope it made a bit of a difference and at least we managed as a team to grow the small points difference to Ferrari which is good.

"But it could have been a lot bigger today with both of us finishing strong."

Bottas eventually retired from the race with an engine failure, but before then his hopes of a good result had been dented after sustaining car damage in a first corner incident involving Kimi Raikkonen and Max Verstappen.

Reflecting on the incident, Bottas felt there was nothing he could do to avoid the crash.

"The start was good, the getaway was nice and I was catching up pretty quickly on the guys in front, but this time there was nowhere to go really," he said. 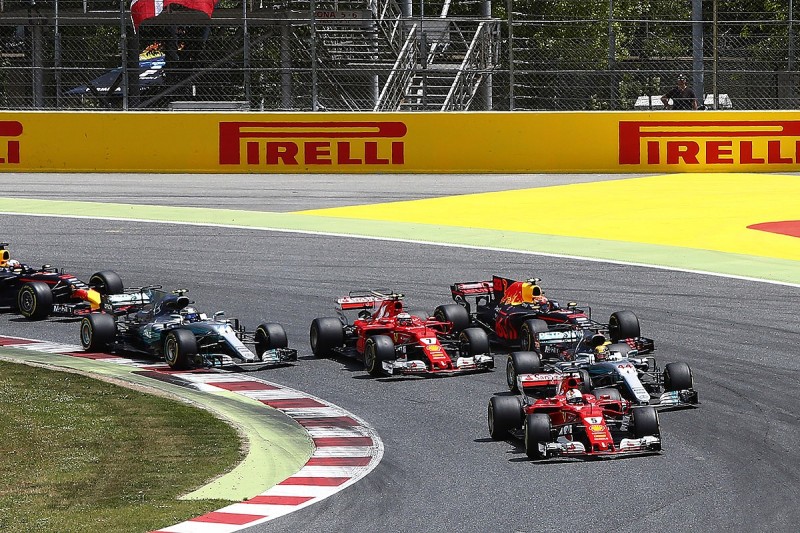 "I was looking first to go left but there wasn't quite enough space.

"I tried to go inside because there was a gap initially, but then Sebastian closed it so I was stuck behind him.

"Going in to turn one I was trying to keep inside, obviously the guys on the outside always try to overtake you and it was unlucky that me and Kimi collided.

"It was just all a bit too tight and close, and a shame what happened to the guys after.

"But in racing when it's close sometimes you hit and that's how it goes.

"I was trying to keep my position and I felt there was no more space for two cars, so it was very close.

"After the contact I really struggled in the first stint.

"I should have finished on the podium so it's very disappointing, but we took a risk going to the old engine [after discovering a water leak in Friday practice].

"We knew it was running out of mileage but that was the only option we could have done to qualify, so that's life."