Mercedes driver Bottas caught Vettel in the closing laps at Sakhir (pictured below), but when he had the chance to make an aggressive move at Turn 1 at the start of the final lap, he did not take it.

Asked what he would do if the same circumstances occurred again, Bottas admitted that he might take a different approach.

"That's a good question," said the Finn. "It just depends on the situation.

"I was not happy at all with a second place, even though otherwise I felt it was a decent race for me [in Bahrain], but second place was not enough.

"And yes, maybe I'm willing to take a bit more risk for that than before, but of course we need to remember it's a long season ahead." 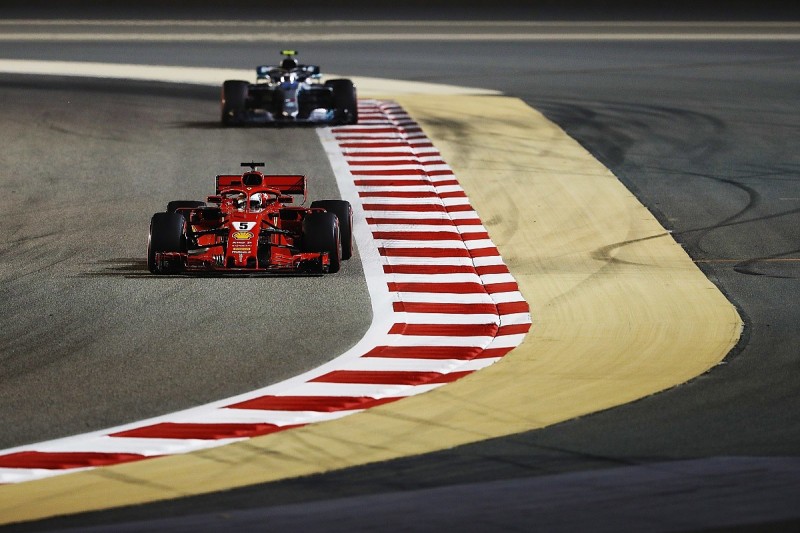 While Mercedes has not won a race yet this season, Bottas believes the team has proven it has a car capable of victories in all three events so far.

"We always knew it was going to be tough, and yes, we're disappointed not to win a race so far in the first three races," he said.

"But this is the game, this year it's going to be extremely tough, there's always going to be six cars at least fighting for the win, and you really need to get everything perfect to make it happen.

"We've had a car in the first three races that could have won the race, purely performance wise, but there's always been something happening.

"The speed we've had is extremely close with Ferrari and Red Bull, we just need to keep it together and try and find any small performance gains, and I'm sure it will come."

Regarding the tactics used by Ferrari in China - where Kimi Raikkonen was left out to aid team-mate Sebastian Vettel - Bottas would not rule out a similar situation at Mercedes.

"I don't know, it depends on the situation of the battle we're having with other teams and the points and all that," he added.

"It was quite a try from them, and it slowed me down a little bit, but I don't think it cost me any positions in that race.

"But that's F1, we have two drivers, and if one of them is behind, there's always an opportunity to do something like this."