Max Verstappen’s victory from tenth on the grid in last Sunday's Formula 1 Hungarian Grand Prix was arguably one of the best that the Red Bull driver has yet delivered.

With ground to make up from his grid position after an engine problem left him without power in qualifying, even Red Bull’s best strategy simulations estimated that the world champion would only be able to make it as far forward as fifth.

But in the end, a perfect storm of circumstances – some due to team and driver strengths, and some due to external factors outside their control – came together to get him right to the front of the field.

Here are the five key factors that helped turned damage limitation in the title fight against Ferrari and Charles Leclerc, in to a knock-out blow before F1's summer break.

Insight: 10 things we learned at the 2022 Hungarian Grand Prix 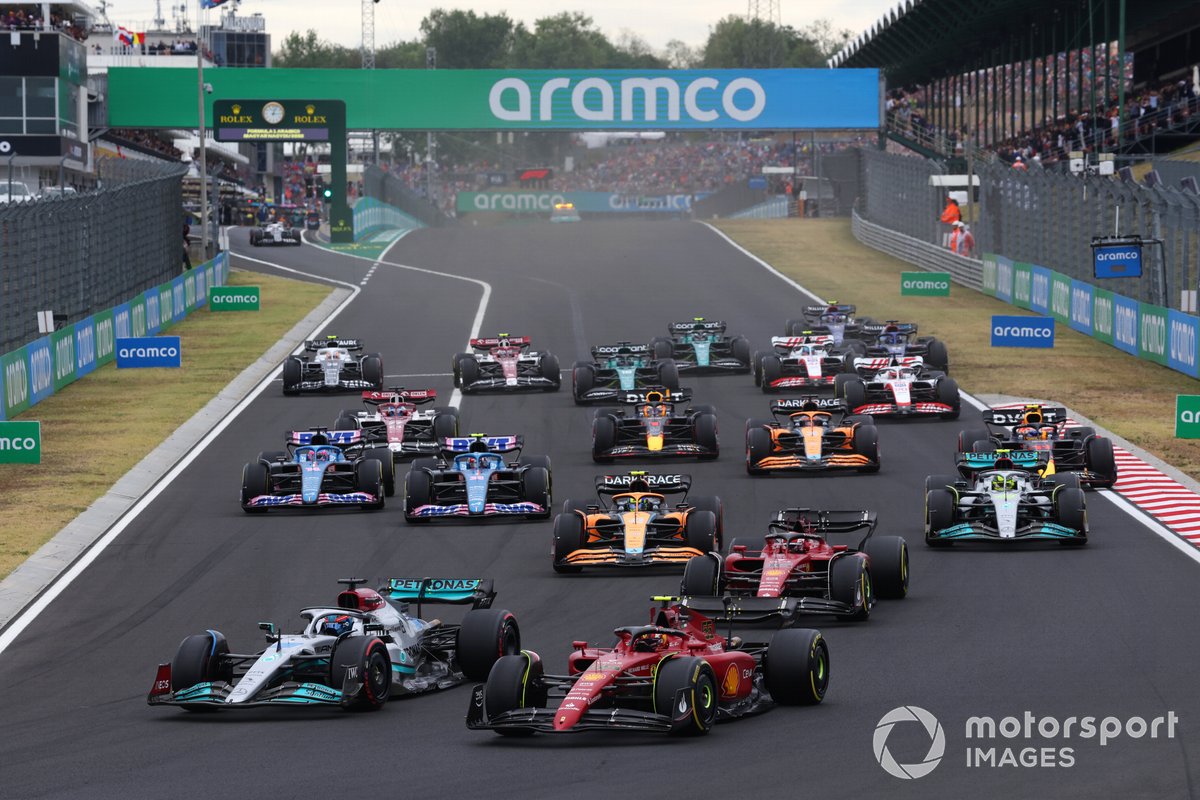 As Russell and Sainz went wheel-to-wheel into Turn 1, Verstappen was anxious not to pick up damage in the mid-pack

F1 has rarely seen an event where the temperature fluctuated as much as it did over the Hungarian GP weekend. From the scorching 34C sauna in which Ferrari excelled during Friday practice, a change in the weather front left things at a chilly 21C amid clouds and drizzle on Sunday.

That turnaround, allied to rain on Saturday having washed away the rubber to leave a very green track, totally transformed how the cars and tyres performed.

The Ferrari which had been so strong in the heat on Friday, struggled to get temperature in its tyres on Sunday – and that pushed it back in to the pack. On the flip side, the Red Bull came alive – especially as it seemed to have so much pace on the soft and medium.

Furthermore, as drivers rapidly realised the hard was not going to be easy to switch on, Red Bull chose to move away from its original plan to start Verstappen on the hards and go for the aggressive soft, which ultimately proved to be the best way to go.

On a hotter day, he may well have set off on the hards and been consigned to playing the long game that would have left him stuck in the pack. Instead, he had an early tyre advantage that meant he could go on the attack. 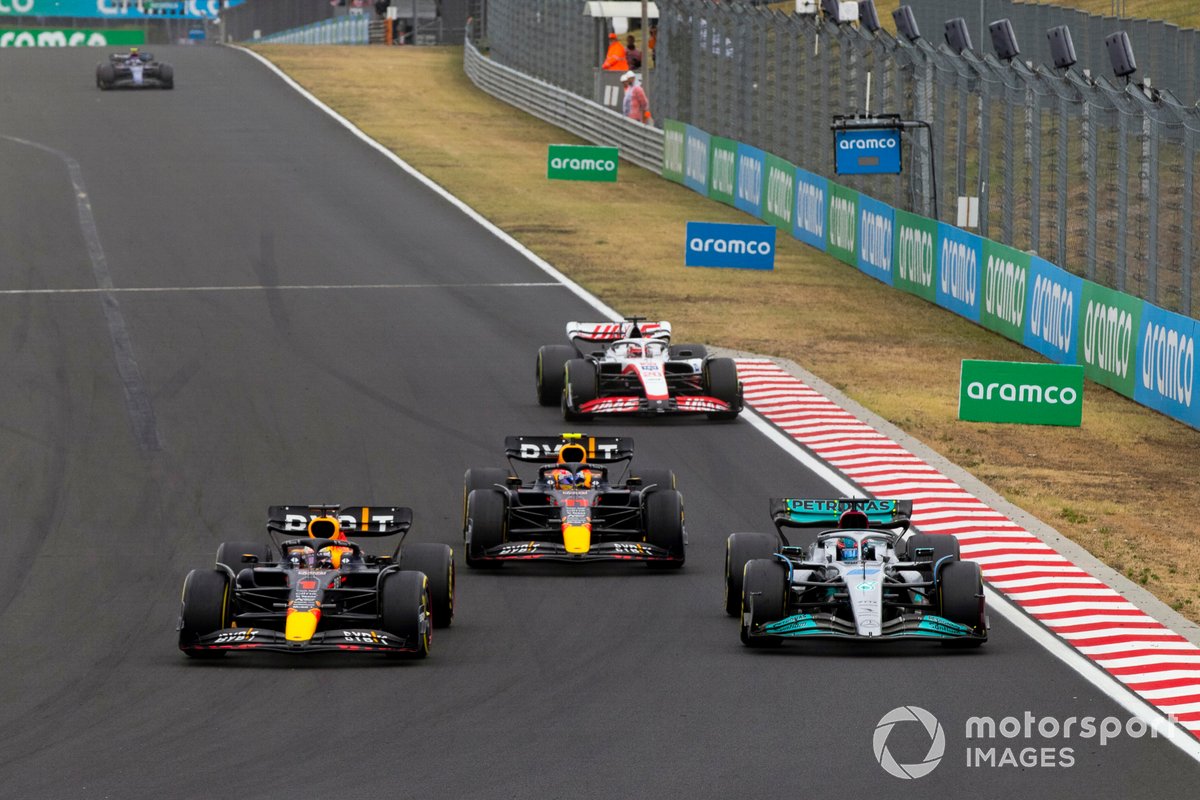 Verstappen was decisive when he needed to be, but also benefitted from overtaking at the Hungaroring being more possible than in previous years

The Hungaroring has a reputation of being up there with Monaco as one of the hardest tracks of the year to overtake on. And indeed, that previous characteristic is exactly what Red Bull’s strategy predictions were telling the team: that the first quarter of the race at least – was going to be spent stuck in traffic losing time to the frontrunners.

However, with Verstappen having the weather-induced pace advantage on the softs, the strength of the new F1 2022 rules played their part too with overtaking much easier this time around. For rather than getting stuck behind the Alpine train, Verstappen had cleared both Fernando Alonso and Esteban Ocon by lap seven as he tagged on to the back of Lewis Hamilton.

When the pair of them got through Lando Norris by lap 12, shortly before the first pitstop phase, it meant Verstappen was right on the back of the battling Mercedes and Ferrari cars – even though he was battling some clutch issues. 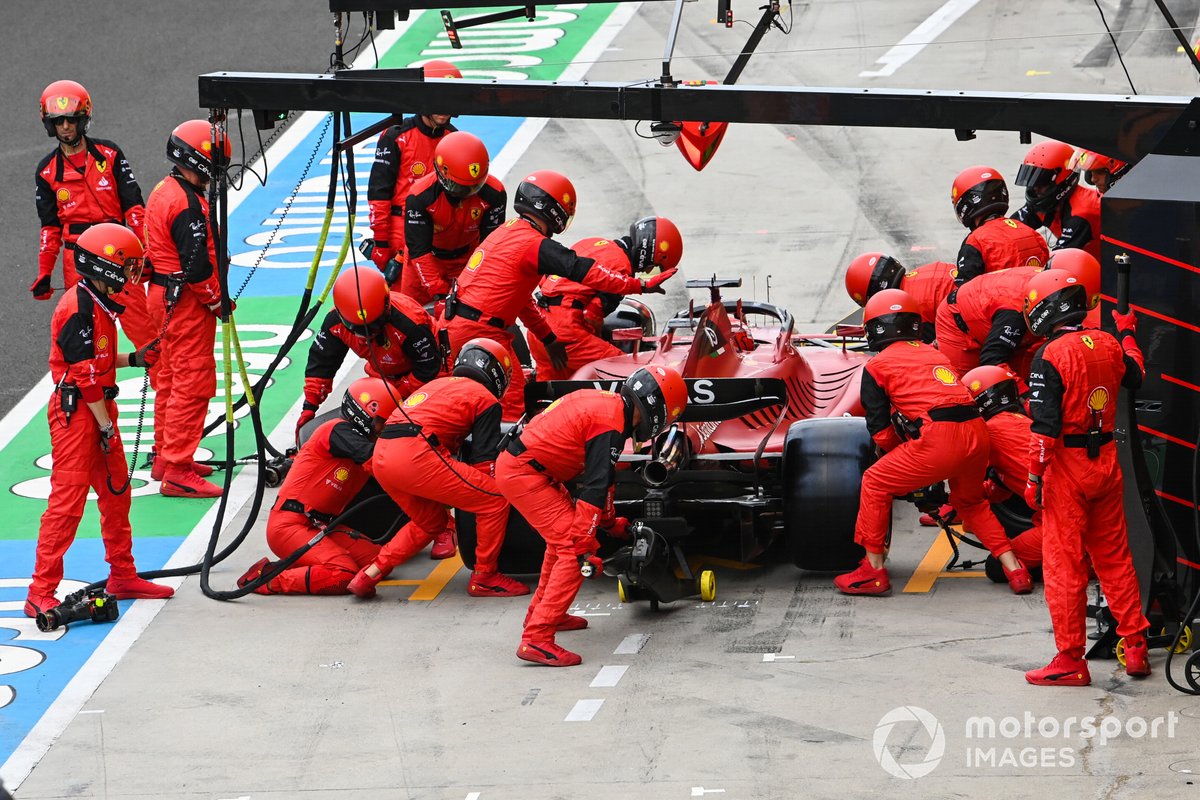 Ferrari's bungled strategy certainly made life easier for Verstappen, with Leclerc having to bail on his hard tyres such were his warmup struggles

The cool weather on Sunday left Ferrari duo Carlos Sainz and Charles Leclerc struggling for pace in the race. And it was their difficulties that further helped Verstappen’s cause.

Ferrari starting its drivers on the mediums, on a day when the hard was not a great tyre, also meant the team had boxed itself in to a corner on strategy – which further compromised its effort.

With all the top teams having just two sets of mediums available, it meant that those starting on the compound would face a pretty big headache with the race turning into a two-stopper. The best way to do it was to stretch both medium stints as long as possible, and then switch over for a final blast on the soft.

However Ferrari, thinking that track position was of utmost important against Verstappen in the title battle, elected to put Leclerc on the hard a lap after his Red Bull rival had pitted for his second and final set of mediums. With the hard so difficult to get up to temperature, it left Leclerc a sitting duck as he fell away from the front and the door was open for Verstappen to move forward. 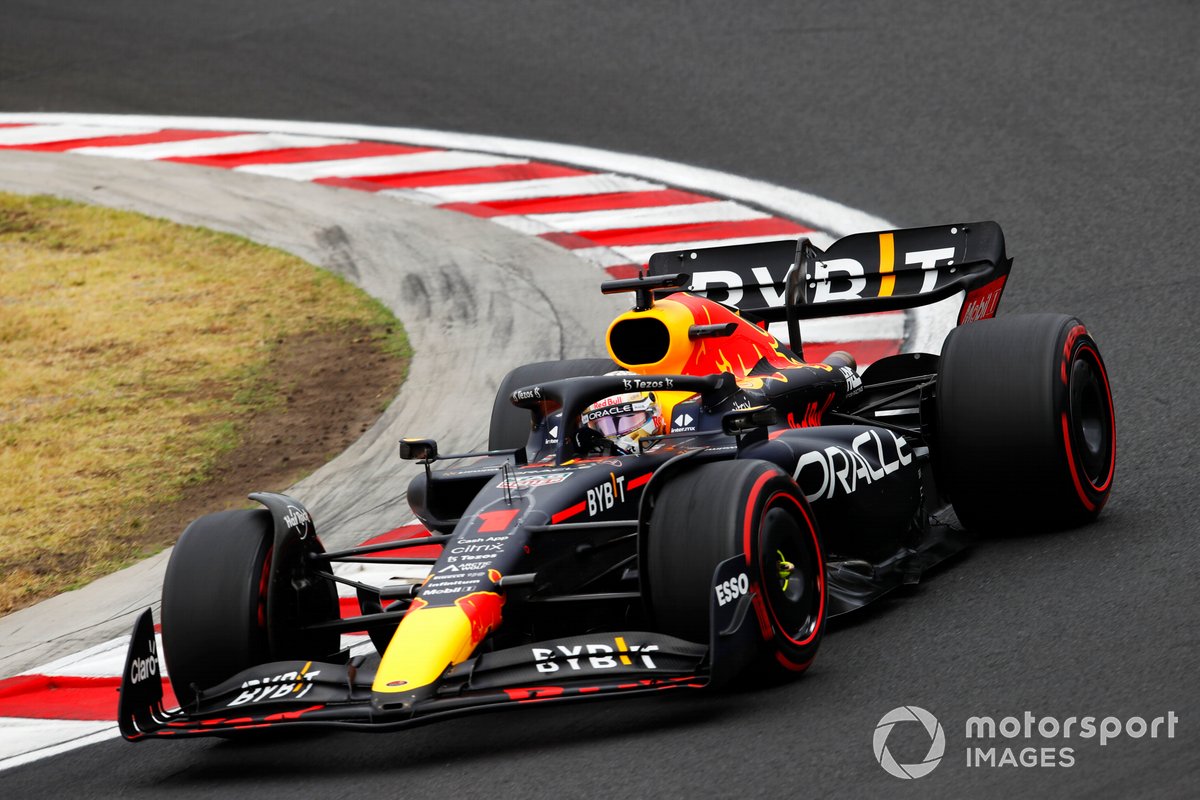 Verstappen’s Hungary triumph was not just down to the weather, strategy, and Red Bull pace coming alive on Sunday. Important to add is that Verstappen’s driving was of the highest order as well.

In the past, a lot of his successes were down to amazing speed, aggressive moves and taking a risk here and there. But Hungary was the perfect example of a much more mature Verstappen, who can mix those strengths with the ability to play the long game.

Verstappen’s start was perhaps one of the most cautious that we’ve ever seen from him, as he found himself boxed in at the opening corner as he appeared unwilling to take too many risks.

As team-mate Sergio Perez swooped around the outside, Verstappen looked in danger of getting stuck behind Daniel Ricciardo and Kevin Magnussen, before the pair of them lost momentum on the way out of Turn 1 as he powered past them.

Thereafter, Verstappen stayed calm amid the clutch problems, was happy to bide his time while the issue was got under control, and didn’t get flustered when he made that one error with the spin after having found his way past Leclerc for the first time.

Asked how this win compared to other great Verstappen triumphs, team boss Christian Horner said: “It’s right up there.” 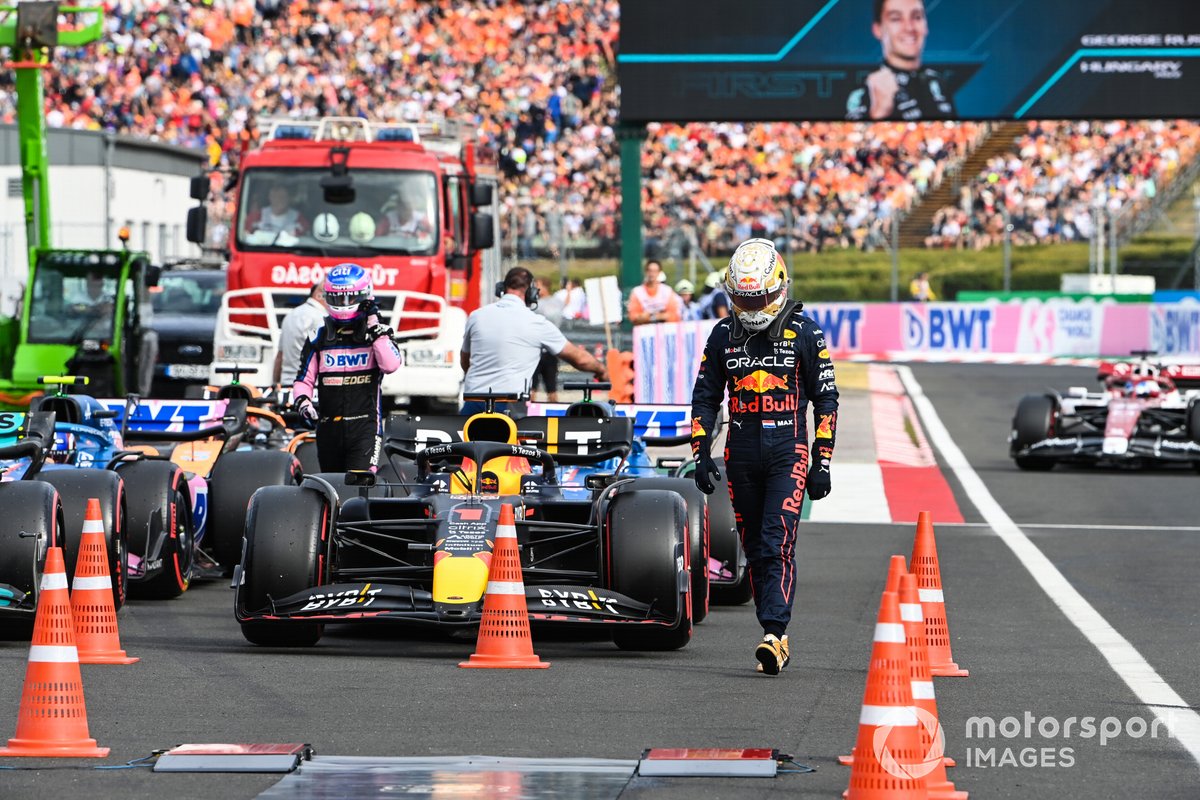 Verstappen's engine problem left him tenth on the grid, but he was fortunate it didn't rear its head later when it could not be fixed

Lucky timing of his engine problem

For every bit of skill that came together in Hungary, the element of pure good luck cannot also be totally discounted.

Although the exact details of Verstappen's engine problem in qualifying have not been revealed, the team has confirmed that it was a broken component that triggered the issue – which could not be repaired at the circuit. That is why Red Bull elected to fit Verstappen with his fresh third powerunit for the race on Sunday.

But, as Horner reflected afterwards, it was probably a stroke of good fortune that the part that broke did so on his final lap of Q3. For if it had lasted just two laps more, then it would have put him out of the race.

“Thankfully we're sitting here now, with 20/20 hindsight, and grateful that it did break [in qualifying],” said Horner. “Because another 12 kilometres, and it would have broken on the way to the grid.”