At the start, Verstappen and Hamilton leapt off the line in unison, with the Red Bull driver coming across to cover the inside line into Turn 1.

As the leading duo raced clear up front, Sergio Perez put Lando Norris under huge pressure for third place through the opening corners, but the McLaren driver was able to rebuff the second Red Bull and even had a look around the outside of Hamilton at the downhill long right of Turn 4.

But on lap 10 Perez dived to Norris’s inside at the tight uphill right of Turn 3 and moved into third as the Briton offered little defence against the move, which Bottas essentially copied on the following lap. 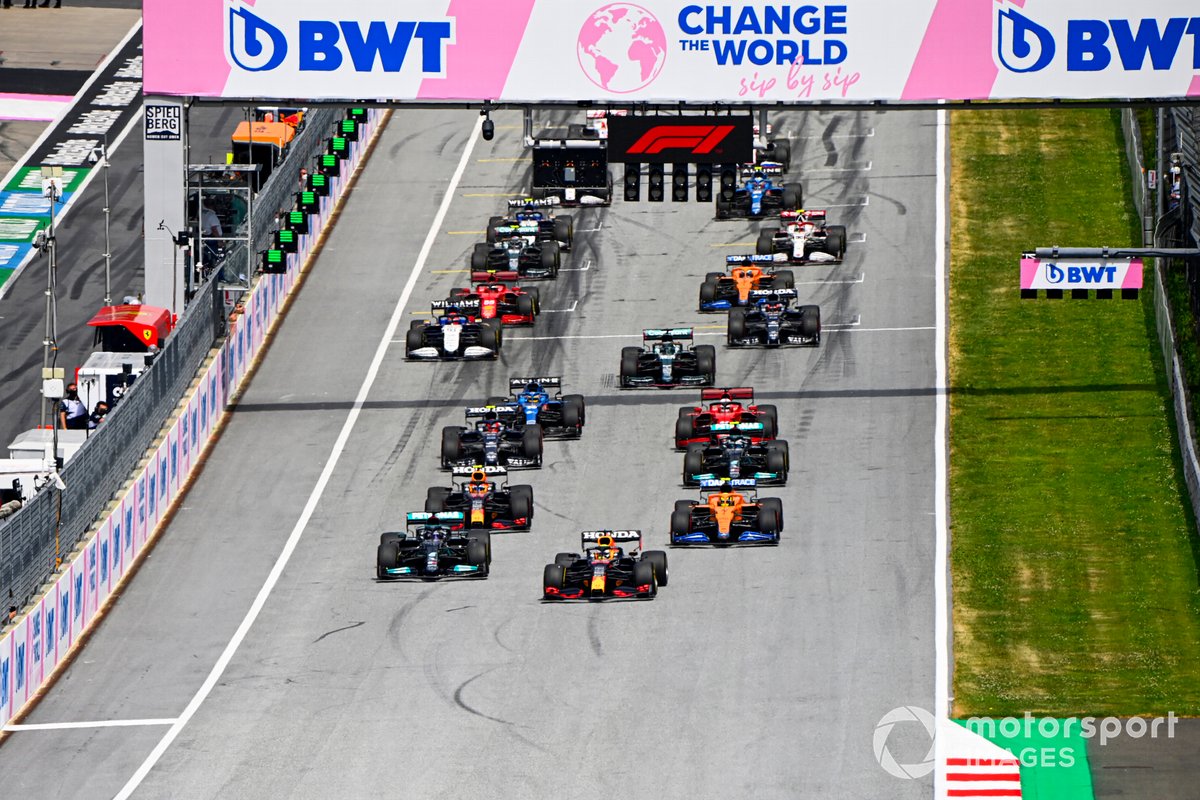 By the end of the race’s first 15 laps, with Perez 15s off the lead in third, Verstappen edges over the three second mark ahead of Hamilton, as he was regularly able to lap in the high 1m09s bracket as the chasing world champion swung between matching Verstappen and logging times in the low 1m10s.

Over the next 13 laps Verstappen gradually worked his lead up to nearly six seconds before the pitstop phase kicked off.

Perez was the first of the leading four cars to pit when he came in at the end of lap 26, to switch his starting softs for hards, but was delayed by a slow left-rear change.

That allowed Bottas to jump ahead into third when he came in at the end of following tour to go from the mediums to hards, which Hamilton did as well one tour later at the end of lap 28.

Red Bull duly brought Verstappen in to make his own switch to the hards one lap after Hamilton and he easily retained the lead, albeit with his advantaged reduced to 4.4s by the time the stops had shaken out.

Mercedes instructed Hamilton to push to close the gap, which came down to 4.0s as he set a then fastest lap at the end of lap 34, before Verstappen was able to edge his lead out again over the next part of the race as the leaders made their way through traffic.

Verstappen’s lead was back to nearly six seconds at the end of lap 46, with Bottas nearly 30s adrift in third as the final phase of the race approached.

The only problem Verstappen encountered from there was what he called a “random” brake pedal issue Red Bull advised was being caused by him braking on the Turn 9 exit kerbs ahead of the final corner. 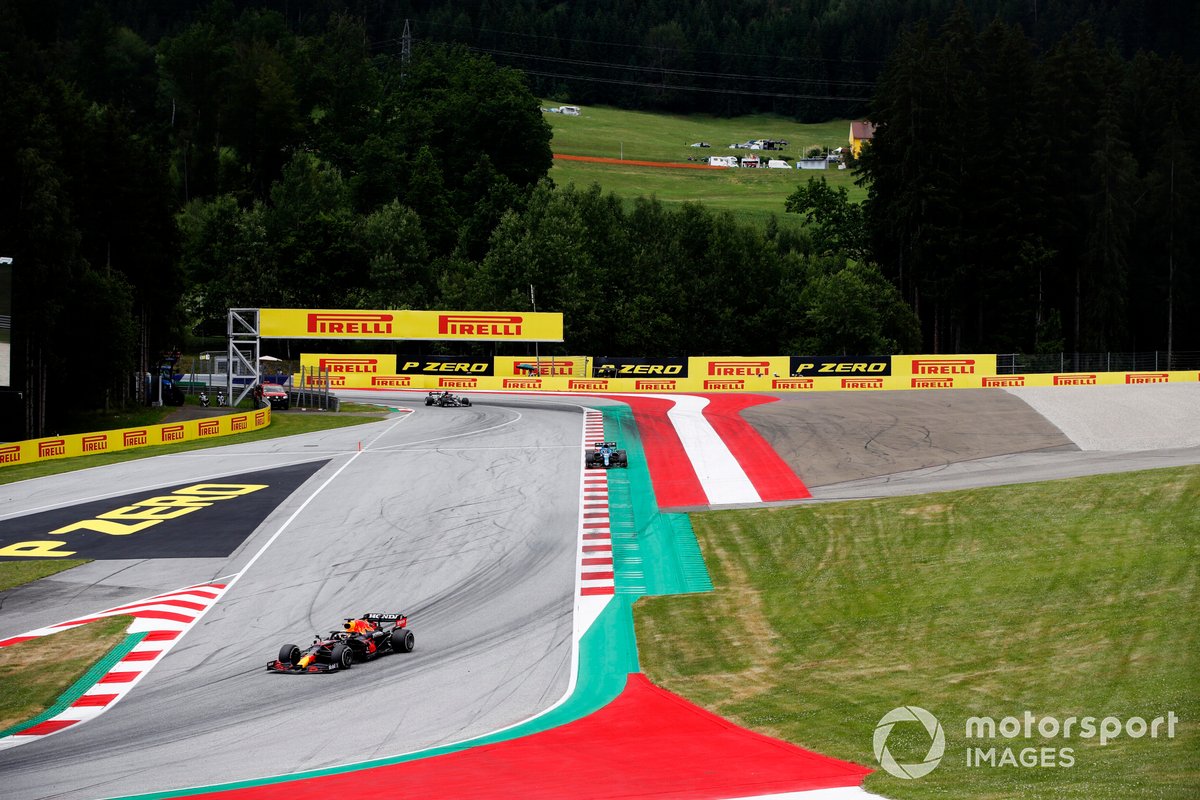 His margin of victory at the finish was 35.7s, with Hamilton reporting he spotted his right-front tyre blistering in the closing stages, as although the weather clouded over in the final 10 laps, the rain stayed away.

Mercedes pitted Hamilton for a second time with two laps to go to give him the chance to take the fastest lap bonus point, such was his gap to Bottas in third, which he duly did on the final lap with a 1m07.058s – the extra stop inflating Verstappen’s lead, which had been just over 15s when Hamilton came in again.

Behind the top two, Bottas held on to finish third, but only just ahead of Perez after Red Bull called him for a surprise second stop on lap 55.

Perez had a near 20s gap to close, having been running just behind Bottas for the opening phase of the Mercedes driver’s second stint, and he quickly scythed into that advantage – sometimes taking over two seconds a lap back.

But as they also negotiated the traffic the leaders had already passed and Perez’s new mediums began to wear, the gap came down at slower rate, with Bottas eventually taking the final spot of the podium by just 0.5s, with Perez unable to get close enough to make a move in time.

Norris came home in a solid, if lonely, fifth place, ahead of the Ferrari duo led by Carlos Sainz Jr.

Sainz’s progress from 12th on the grid came via running deep into the race on the medium tyres and overcutting a big group of cars that had run ahead of him in the early stages, then moving up to sixth by passing Lance Stroll shortly after his pitstop by using DRS to blast by on the inside out of Turn 3 on lap 45.

Charles Leclerc’s race to seventh behind his team-mate was rather more adventurous, as he had to stop at the end of the first lap after clouting Pierre Gasly on the run up to Turn 3 on the opening lap, which gave the AlphaTauri a left-rear puncture and damaged the right side of the Ferrari’s front wing. 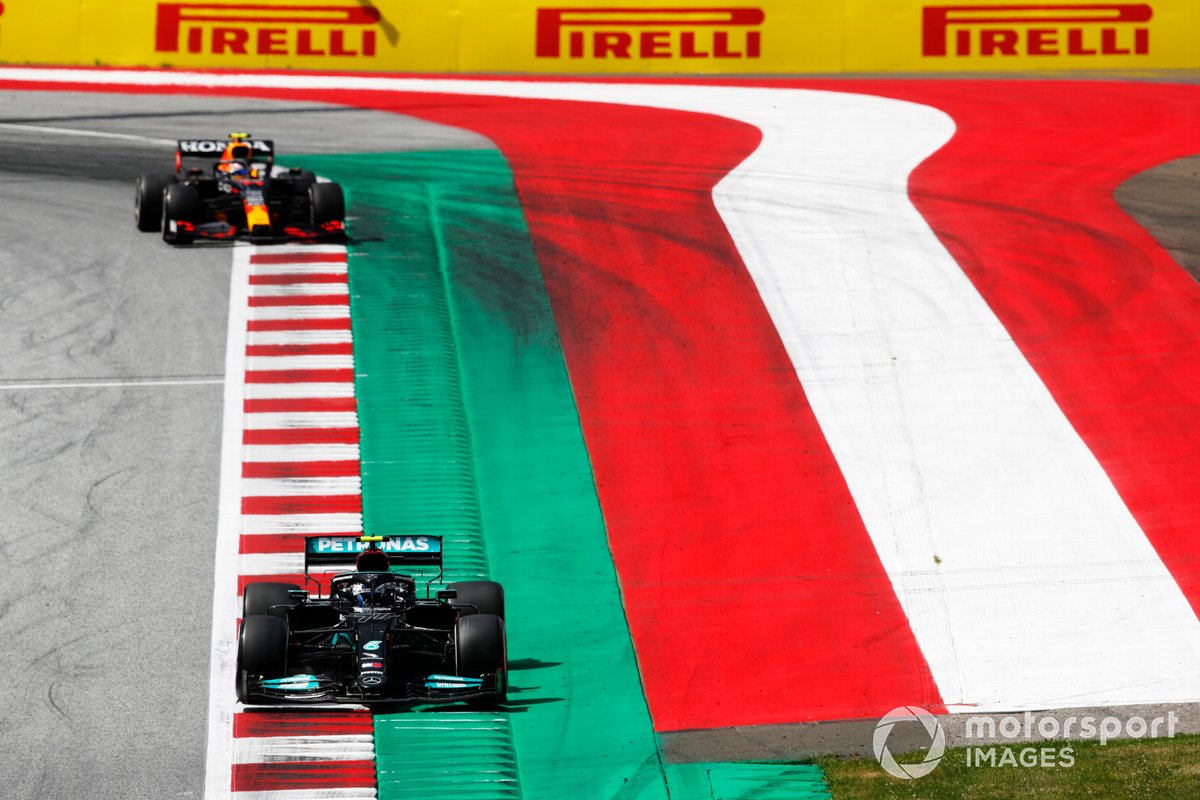 Leclerc made two stops on his way back up the order, showing strong pace and making a series of bold overtakes – twice going down the inside of Antonio Giovinazzi and Turn 3 and passing Kimi Raikkonen and Fernando Alonso around the outside at Turn 4 – with the former pass occurring at the turn-in point for the corner and with the Alfa Romeo’s front wing picking up a bit of damage as the cars briefly came together.

A final stint charge helped Leclerc recover to surpass Stroll for seventh, with Alonso finishing just behind and himself only just ahead of Yuki Tsunoda, who took the final points-paying place in 10th.

Raikkonen was 11th ahead of Sebastian Vettel and Daniel Ricciardo, who had made an excellent start to run in the top 10 early on before falling back dramatically on lap seven, when he reported he had “low power”.

Although the Australian’s power level returned, he ran in the pack from there and ended up 13th ahead of Esteban Ocon in the second Alpine.

Gasly retired as a result of the puncture he picked up on lap one, with the Frenchman also making contact with Giovinazzi – spinning the Alfa at Turn 3 just a few moments after his clash with Leclerc – as he fought to control his damaged car.

In the runoff beyond Turn 3, Gasly also touched Nicholas Latifi (who eventually finished P17 between the two Haas drivers) and gave the Williams a puncture before limping back to the pits with his left-rear destroyed.

The other DNF was George Russell, who was running strongly behind Alonso in the early stages as they headed a train of cars looking to take seventh place, boosted up the order by Leclerc and Gasly’s clash.

But Russell was warned of a reliability problem ahead of his stop, where he was stationary for nearly 20s as Williams had to top up the pneumatic pressure in his power unit, and he then had to come in again immediately for the process to be repeated.

Although Russell returned to run at the rear of the pack for a while, he was called in and retired on lap 39.