Lewis Hamilton took pole ahead of Mercedes team-mate Valtteri Bottas, with Kimi Raikkonen 1.1 seconds adrift in third in the leading Ferrari and Vettel 1.248s off the pace alongside him on row two.

Championship leader Vettel remained unperturbed by the gap and was confident Ferrari could challenging Mercedes in the race.

"It's one of those tracks where you need to have the car in the window, the tyres in the window and if you feel confident, you extract a lot of lap time," he said.

"I'm not too bothered by the gap, it's not nice but equally I'm not worried.

"The car was very good on Friday. In the long run we looked very competitive so it should be fine.

"Third was probably the maximum. As a team, we got what we could today.

"Tomorrow can be a different story. The race pace should be a lot closer."

Vettel entered the session on the back foot, after Ferrari reverted to an older engine as a precaution between final practice and qualifying having discovered a hydraulic leak.

The older engine has completed four races, with the unit used earlier in the Baku weekend clear to be used at a later date if required. 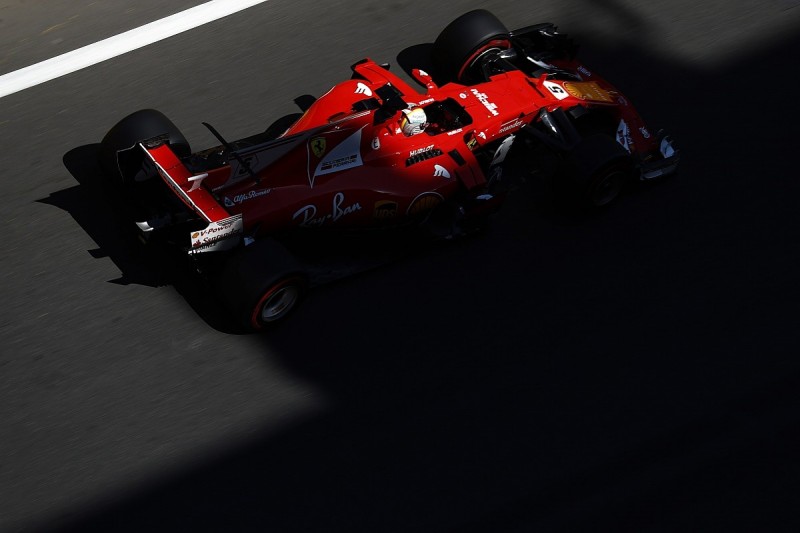 Vettel was then caught at the end of the pitlane at the end of Q3 when Daniel Ricciardo hit the wall to bring out the red flag, meaning he lost tyre temperature as he used the same set for the final run in qualifying when the session restarted.

He refused to blame that incident or a lack of running for Ferrari's failure to provide more of a threat to Mercedes in qualifying.

"I don't like excuses, so I think it was a good effort by the whole team to get the car out in time without losing anything of the first part of qualifying," said Vettel.

"We would have loved to have had more laps this morning.

"The most important thing is we made it out in time, we had no issues in qualifying so it was the right thing to do.

"It didn't help that I was going out and then the traffic light jumped to red.

"That set was the same one I went out with at the end but still it was OK and the last lap, I thought the grip was fine.

"Maybe here or there not ideal but it was important to get the lap in and make the jump to fourth."

Red Bull dominated Friday practice, with Max Verstappen topping both timesheets and Ricciardo finishing both in the top three, but they did not feature in the battle for pole with Verstappen fifth and Ricciardo 10th.

"I was surprised they weren't faster, they were very quick all weekend," said Vettel.

"We'll see tomorrow. It will be a close race, I don't expect big differences in pace between the three teams."