Carlos Sainz Jr felt “proud” of his performance across the Russian Grand Prix weekend, calling it his best Formula 1 race weekend since joining Ferrari for 2021.

Sainz scored his third podium of the season by finishing third at the Sochi Autodrom on Sunday, having led the early stages of the race before slipping behind Lando Norris.

Sainz looked set to finish fourth before the late downpour allowed him to rise up to third place after a well-timed switch to intermediates, following home Lewis Hamilton and Max Verstappen.

Sainz has been working throughout 2021 to try and get up to speed at Ferrari since his switch from McLaren, but now sits 8.5 points clear of team-mate Charles Leclerc in the standings.

The result capped off a solid weekend for Sainz that had seen him qualify second on Saturday in damp conditions, prompting the Spaniard to label it as his best weekend yet with Ferrari.

“I think I managed to put a very strong weekend from practice, especially into Q3, and then a good start and good pace management in very tricky conditions,” Sainz said.

“I’m not going to lie, I’m proud of the weekend. I think the team has also done a very good job with all of the pitstop calls, yesterday going onto the soft tyre at the right time, today going into taking the intermediates at the right time.

“Overall, I think it’s been my strongest weekend in Ferrari.” 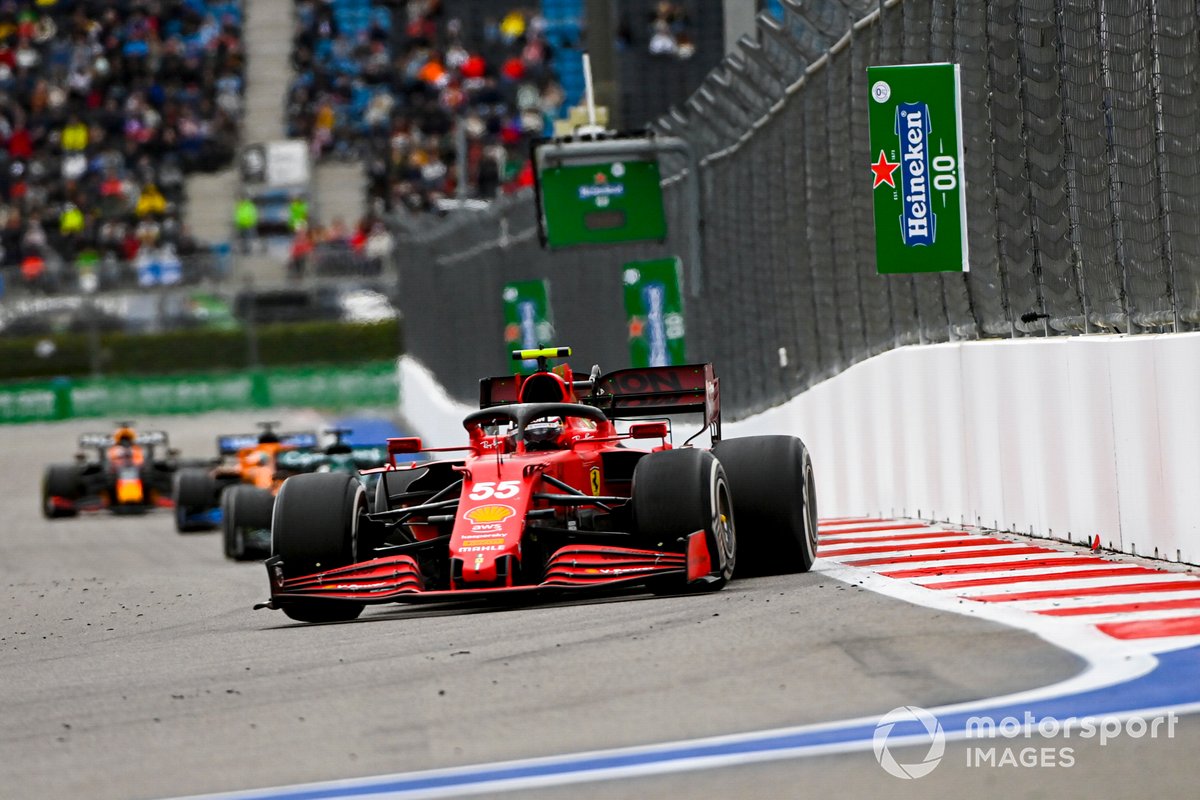 Sainz overtook Norris on the run down to Turn 2 on the opening lap, but was passed just before coming into the pits at the end of lap 14 as he struggled with tyre graining.

At one point, Sainz was informed that he looked set to finish the race in fifth place, something he conceded “came as a bit of a surprise” at the time.

“After leading the race, you are at least confident that you are in the fight for the podium,” Sainz said.

“I didn’t exactly know where the others were at that point on-track. I knew I had done a pitstop, and I knew that I was not getting overcut by anyone. So the pace was decent.

“Maybe our simulations suggested that because everyone was going to put the medium at the end, we were going to be an easy prey for them, and we were most likely going to finish P5.”

After clearing traffic, Sainz was able to up his pace and grab third place thanks to the late rain, although he conceded the result “doesn’t taste as good” after leading the race.

“What we need to keep working on as a team is to make sure the next time I am in the position of leading a race, we make it stick and we win the race, we don’t suffer as much as we suffered with graining and we were not so vulnerable on the straights and all that,” Sainz said.

“[We need to] make sure we keep improving as a team to make it stick next time.”