The Spaniard was the only driver to line up on the grid for the damp start with slicks, while Renault's Jolyon Palmer dived for the pits at the end of the formation lap to copy the decision.

Sainz slipped to the back of the field off the line, but he caught the pack in just a handful of corners on the dry part of the lap, and made up ground when everyone pitted for slicks on his way to finishing seventh.

"When I saw everyone on inters I thought it was the wrong decision [to start on slicks], but you have to trust yourself," said Sainz.

"You should have seen the faces of my engineers, of Franz Tost, of Helmut Marko, when I told them I wanted to start on the super-soft.

"I told them I was convinced, I thought it would pay off, so let's play the long game.

"They looked at me like I was totally mad, but it worked.

"It's quite funny now - in the moment I was not sure, but I trusted myself.

"The first four corners were very tough, but after that the track was dry and suddenly I rejoined the pack.

"When everyone started to pit [for slicks], I knew I had taken the right decision and I was so happy." 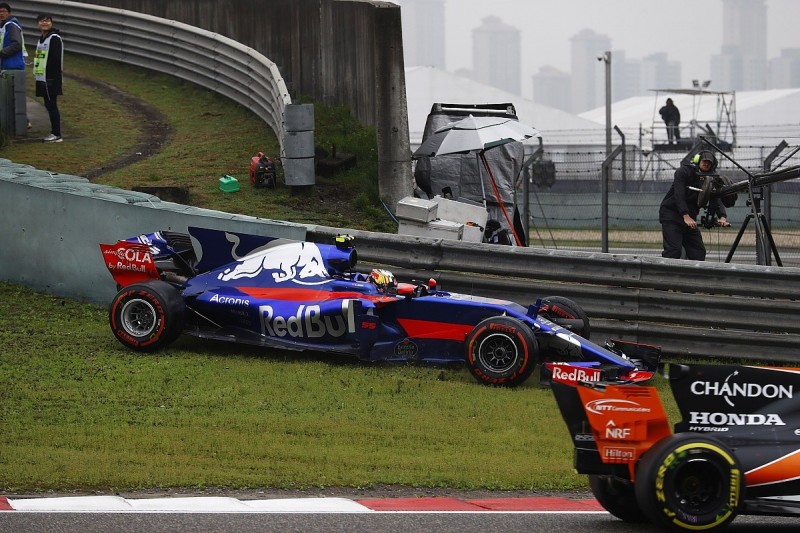 Sainz had a lucky escape when he spun behind the safety car between Turns 2-3 and touched the wall, and he believes his pace after the restart, when he kept up with the Red Bull and Ferrari drivers, was decisive in him being the only driver outside of the top three teams to finish on the lead lap.

"Behind the safety car my tyres went down to 50 degrees, that was very cold and I lost the car," he said.

"I touched a bit the wall, I was lucky in that regard.

"I thought I had blown it completely, I was so angry with myself, thinking 'what have I done?', but in those cases you need to reset your mind.

"Suddenly the safety car came in and we were faster than Ferrari, faster than Red Bull in damp conditions.

"That was a great feeling and from then onwards I was pumped up to keep opening the gap to the rest."