Russian GP: Palmer hoped Grosjean would 'use his brain' in crash

Grosjean hit the right-rear of the Renault after bouncing across the kerb on the inside of Turn 2 at the start, and got turfed into the barrier as it spun round into his Haas.

The stewards took no action against either driver after a post-race investigation, but Palmer said the blame lay with Grosjean.

"There was not really a space," he said. "I had a car on the outside as well, so I couldn't give him any space, otherwise I would have hit a Sauber.

"He obviously jumped the kerb there, and ended up going into the side of me.

"I think he was far too ambitious. There's no gap on the inside there, it's a very tight corner, we've seen many accidents over the years there.

"If you come in right from the inside, there's always bunches at the apex, and that's what happened.

"I had to turn the corner and hope that he uses his brain, but he just committed too hard."

Grosjean was adamant that Palmer just turned in on him.

"There's not much to say," said Grosjean. "I had a great start, a great run into Turn 1, passed Jolyon under braking.

"Then I was on the inside, he turned, we had contact, he spun his car.

"He came back and hit me a second time, and that put me in the wall. 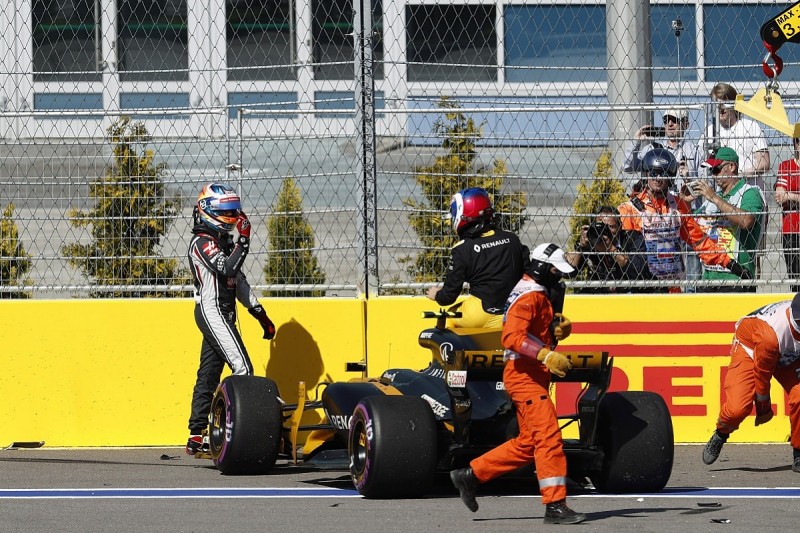 The first-lap crash completed difficult weekends for both drivers.

Palmer's problems started with an exhaust problem in second practice, which burned the car and required an overnight chassis change.

A mysterious loss of engine power at the start of FP3 meant Renault swapped his engine for qualifying, in which Palmer crashed out of Q1.

"I think that's the case every weekend so far," said Palmer of his lack of track time.

"I'm ready to go home, reset, and come back much stronger in Barcelona."

Grosjean had struggled throughout practice, lapping slower than team-mate Kevin Magnussen and failing to find a good balance.

He started at the back after Palmer's Q1 shunt prevented him from making a late improvement and bemoaned the lost opportunity to make amends.

"I was full of hope going into the race," said Grosjean, "trying to understand what happened in qualifying and what we could do better, to help the team and to help us grow.

"I had a really positive mentality going into the race."