The triumph was achieved in an unusual manner, with Mercedes only being crowned after Kimi Raikkonen was handed a 30-second time penalty post-race for colliding with Valtteri Bottas on the final lap - dropping the second Ferrari from fifth to eighth.

With the decision announced one hour and fifty minutes after the race, boss Toto Wolff and non-executive chairman Niki Lauda had already left the circuit.

Hamilton, though, said it felt "special to have contributed to the team's success", with former team principal Brawn not far from his thoughts.

Sold a vision by Brawn and Lauda towards the end of 2012 of Mercedes' plans, Hamilton said: "When I spoke with Ross a few years ago I never envisaged we would win back to back titles.

"I remember sitting with Ross and I got such a good feeling when he told me the plans.

"I need to make sure I message him because still today, while we are succeeding, Ross is still a part of it.

"I really didn't know we'd be as dominant this year either as we were last year.

"Naturally when the rules are similar it should be the same, but after being at McLaren and seeing how it went from one year to the next it just shows anything can happen in the sport. 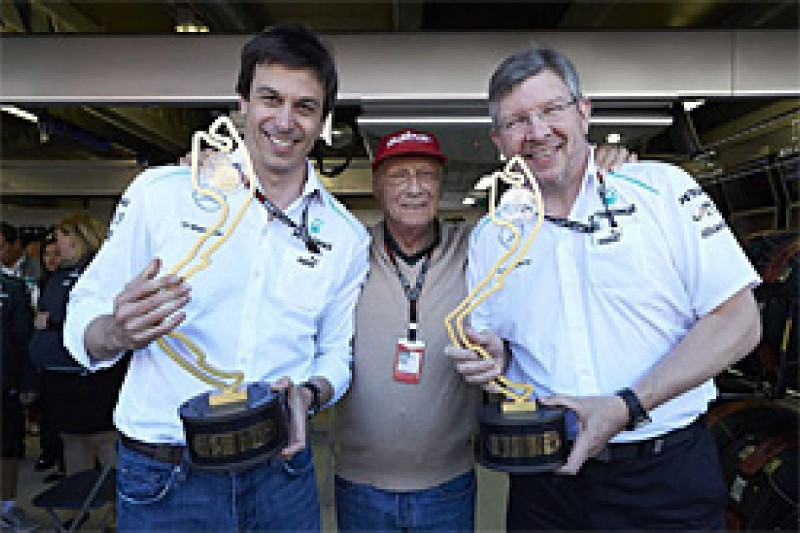 "I felt the guys would do a good job, I just didn't know it was going to be as this good.

"They've done an even better job this year than they did last year, which is just - and I continue to say this - phenomenal."

NO SATISFACTION FOR ROSBERG

As for Rosberg, whose race ended early with a throttle pedal issue that leaves him 73 points behind Hamilton and almost out of the drivers' title race, the German was able to garner little joy from the championship triumph.

Asked by Autosport whether he felt any satisfaction in the team being crowned world champions, he replied: "No, unfortunately not. It's just a strange way.

"I'll get it tomorrow when I see we are celebrating with everybody [at the factories in Brackley and Brixworth], but it's been a strange day.

"I'm obviously well aware it's a massive team effort. Everybody is in it with their heart so much.

"It is still very special to win the constructors', and that's what everybody is working towards.

"It's awesome to be a part of that. I'm a world champion as well, so that's a small positive."

Hamilton: I wasn't defeatist with Spanish GP call to save Mercedes F1 engine