Red Bull's 2018 RB14 covered 783 laps during the two weeks of pre-season testing in Barcelona in the hands of Ricciardo and team-mate Max Verstappen.

That total is more than the team managed across two weeks last year, or the three weeks in 2014 at the start of the V6 turbo hybrid era, but fewer than it had logged in '15 and '16.

But with all teams's mileage affected by difficult weather conditions in the opening week, Ricciardo is convinced Red Bull has not been this well prepared for the season opener since he was promoted to the senior team from Toro Rosso ahead of the 2014 campaign.

"We're certainly more ready than we were last year - and probably every year before that since I've been with the team," Ricciardo said.

"We did a lot of laps, I think the pace of the car is not bad - we still have some things to improve, [but] it's normal.

"But going to the [first] race and having confidence to push the car on the limit and push the engine a little bit, I think we have much more confidence now."

Ricciardo said Red Bull had completed the planned programme it had set out over the two weeks.

"It's not always the case, especially the last few years it's been tough for us," he added.

"Last week it was frustrating, I felt like we were losing track time and losing testing time before the season. But this week fortunately we got to do a lot more."

Ferrari set the fastest outright lap during testing, but Red Bull has frequently been named as the biggest threat to reigning champion team Mercedes. 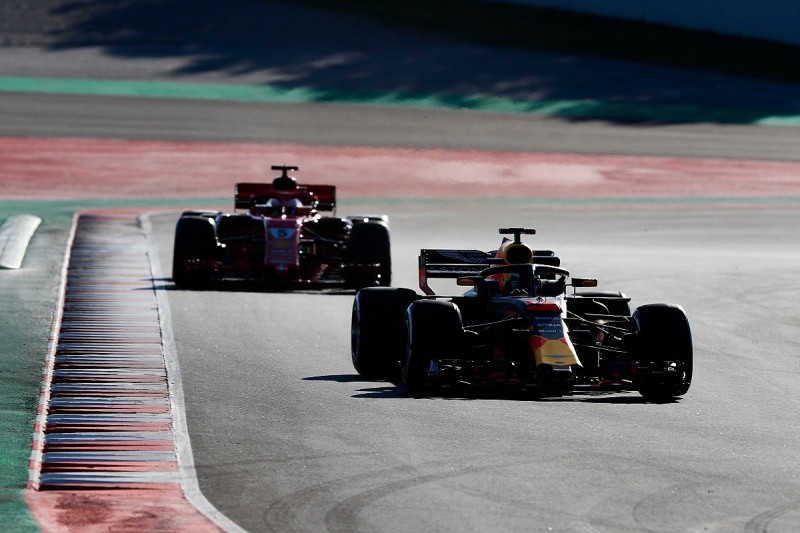 Ricciardo believes that Red Bull is closer to the sharp end of the grid, but does not think the RB14 is the car to beat.

"I think we're looking OK," he said. "I don't think we're yet the fastest car, I think we've still got to find a bit of time, but I think we'll be close enough to be in the hunt."

Asked if Red Bull was now between Mercedes and Ferrari in the pecking order, he said: "The other day [it looked] maybe a bit like that, but Ferrari turned it up the last couple of days, they had pretty good pace.

"And then you see some other teams throw in some quick times.

"I think we still do have some lap time to find, but I do believe we're in the ballpark.

"What does 'the ballpark' mean? I don't know. We're there or thereabouts."