Daniel Ricciardo says Racing Point's Formula 1 rivals should never have allowed Sergio Perez the freedom to win the Sakhir Grand Prix, after he was last on the opening lap

Perez pulled off a sensational charge in Bahrain last weekend, after being right at the back of the field on the first lap following a collision with Charles Leclerc.

He blasted his way through the field to claim a maiden F1 victory, but for Ricciardo - who finished fifth with his Renault team-mate Esteban Ocon second - he believes there was no excuse for the way Perez was able to stage such a recovery.

"It was tough and I'm fifth, and usually that is a good result, plus Esteban in second so congratulations to him," Ricciardo told Sky.

"But if you see our rivals [Racing Point are] first and third, and I heard that Perez was in the pits on lap one, so congrats to him, but for all of us, when a car that pits on lap one, you can't let him win the race. I felt like we all missed out."

Ricciardo was in a train of cars that were battling for the final podium spots for much of the race in Bahrain, but he says his chances were ultimately compromised by getting undercut by AlphaTauri's Daniil Kvyat at the first round of stops. 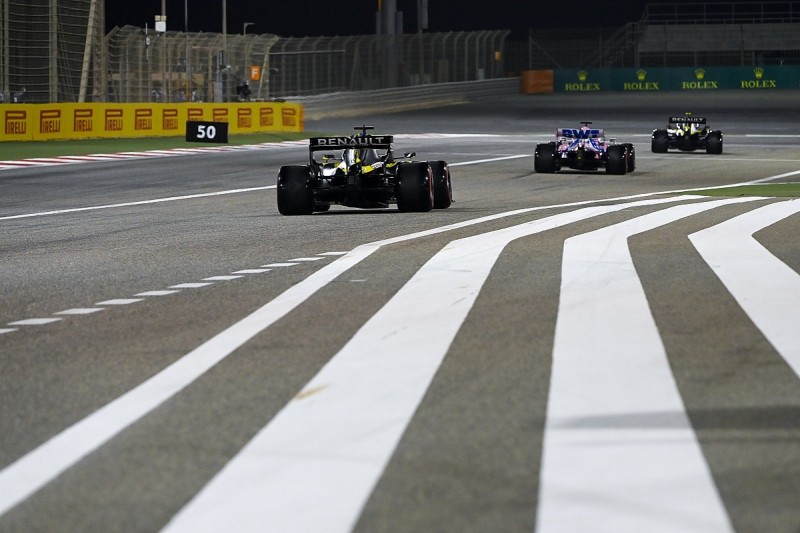 "To be honest it was a scrappy race from our side," he said.

"I got called to the pits, but I was already past the pit entry so I couldn't pit, and then [Daniil] Kvyat undercut us.

"We gave him a freebie and then spent the whole second stint behind him. I felt every lap we were behind him the race was getting away from us."

He added: "It is probably the most disappointing fifth I've had in a while, but on the other side I have to applaud and congratulate Esteban and his side of the garage as they executed a strong race."

Renault had been locked in a tight fight with Racing Point and McLaren for third place in the constructors' championship, but now looks unlikely to come out on top of that battle with just one race remaining.

Racing Point is currently third on 194 points, just ten points ahead of McLaren in fourth. Renault is fifth on 172 points.