George Russell hopes his Sakhir Grand Prix display will give Mercedes Formula 1 boss Toto Wolff a headache over his driver line-up "not just for 2022, maybe sooner"

After being called up to race for Mercedes following Lewis Hamilton's positive test for COVID-19, Russell qualified second in Bahrain and was on course to win the race before a pit stop blunder dropped him to fifth.

Russell fought his way back to second and was quickly catching race leader Sergio Perez, only to suffer a puncture with 10 laps to go that forced him to pit again.

Russell ultimately finished the race ninth, but his display only fuelled suggestions he could move up to Mercedes once his Williams contract expires at the end of next year.

"The best way to do your talking is on the track," Russell said.

"This is a performance industry, and I hope this weekend has cemented their views regarding me.

"Mercedes have supported me since the end of 2016. They've followed my whole career very closely. Hopefully this is just another step on the ladder."

Russell fell just 0.026 seconds shy of team-mate Valtteri Bottas in qualifying, and beat him off the line to take the lead.

He was also able to pass the Finn - who has raced for Mercedes since 2017 - with a fine overtake after the safety car period.

Mercedes denied last week it was treating the weekend as a shootout between Russell and Bottas for a seat alongside Hamilton in 2022, but Russell said after the race he hoped it gave Wolff something to think about. 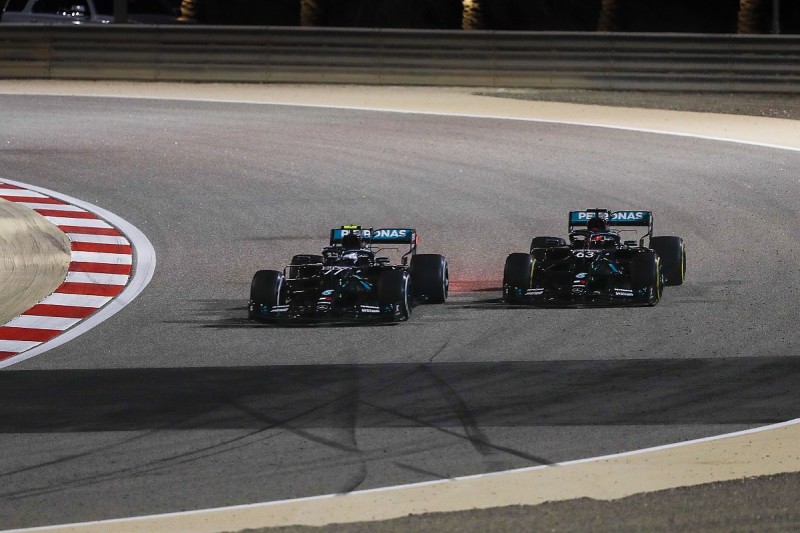 "This has been a great weekend of validation, saying actually we probably have been doing a very good job in the Williams this year," Russell said.

"From Toto's perspective, hopefully I have given him a headache, not just for 2022, maybe sooner."

Bottas is under contract for next year with Mercedes, and although Hamilton is yet to finalise a new deal, he is widely expected to sign a new multi-year agreement in the coming weeks.

Wolff distanced himself from the idea of Russell racing a Mercedes next year, but did ponder how he could fit in alongside Hamilton in the future.

"He's a Williams driver, he signed up to Williams and our driver line-up is Valtteri and Lewis," Wolff said.

"So I don't see this as a realistic situation at that moment of time.

"But I can understand that it would be an interesting situation to have been both in the team and maybe a bit of a wild ride for all of us.

"Maybe that will happen in the future."

Wolff added: "Now we need to see what the future holds. To be honest, I haven't made up my mind what that means for us."