Over the last six grands prix Renault has scored 26 points to Haas's 57, and the two teams now stand on 82 and 76 respectively.

Renault endured one of its worst weekends of the season in Belgium, with both drivers going to the back of the grid after power unit changes, and neither scoring points.

"Frankly we were assuming that this gap would disappear like an ice cube in the sun," Abiteboul told Autosport.

"We knew since day one that Haas is very competitive, and actually we are lucky that we are still ahead.

"It gives us the opportunity to keep on defending until Abu Dhabi.

"We know that we have another challenging track in Monza, but let's see.

"We have quite a lot to come in terms of development on the chassis, but I expect the predominant factor is going to be engine competitiveness."

Abiteboul admitted that Spa was always going to be a tough weekend given Renault's grid situation.

"We decided to focus all the grid penalties that we needed [on Spa], and hopefully there won't be any more to come, and there will be more straightforward races in the next eight rounds," he said.

"When you are starting from so far behind you try to turn around the situation with all sorts of things, aggressive downforce level, aggressive tyre choice. 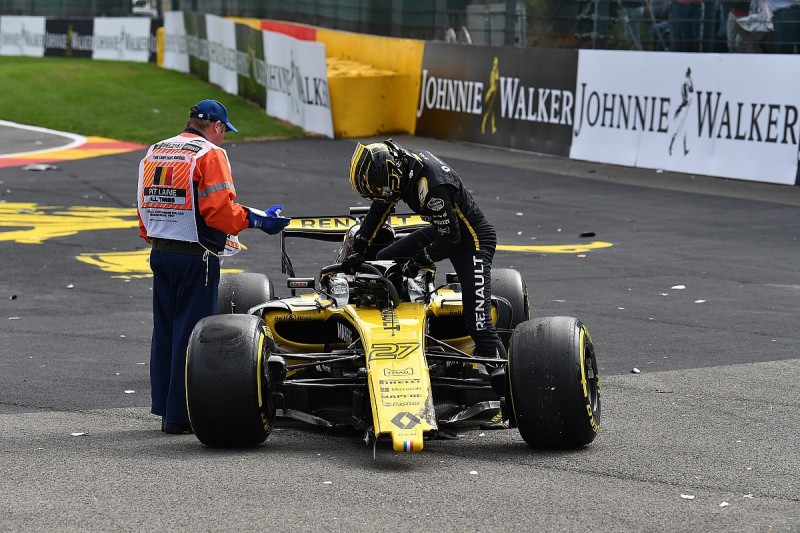 "The drivers try to recover positions at the start, which seems like the best moment to do that, and what happened happens. We just have to try to move on."

Haas is still chasing answers over whether its Spa floor upgrade was actually a step forward.

After a difficult Friday practice, Grosjean reverted to the older version from qualifying while Magnussen stuck with the new parts.

Although Grosjean qualified and finished ahead, team principal Gunther Steiner said that there had been no initial clues from either driver feedback or car data to pinpoint which version was better.

"I think neither of the two is wrong. We have to see which gives us the better data," he said.

Steiner also played down the rate at which Haas had caught Renault, and the prospect of cutting the gap further at Monza.

"Renault, they are a good team. They will fight for it. They will not hand us the fourth position," Steiner added.

"They had a downer [at Spa] like we will have a downer before we get to the end of the season, so they could be strong at Monza like they are normally are."