Palmer's run in the RS16 at Silverstone on Wednesday resulted in the car catching fire on his final after the chequered flag had been brought out.

Explaining the incident, team principal Fred Vasseur said: "The car caught fire. This looks to be the result of a hydraulic leak and we're naturally investigating what happened.

"The fortunate thing is the fire happened on the final lap of the day so we were able to complete all we could for that day.

"There was no issue for Jo and the fire was soon extinguished."

From his perspective, Palmer added: "Although we didn't set the world alight with our lap time, we did manage to set the car itself alight which certainly wasn't part of the plan.

"It looks like it was a hydraulic leak, but fortunately it was all under control pretty quickly.

"It didn't affect our day's programme, however, it did give the crew at the track and back at Enstone quite a bit of unexpected work to do afterwards." 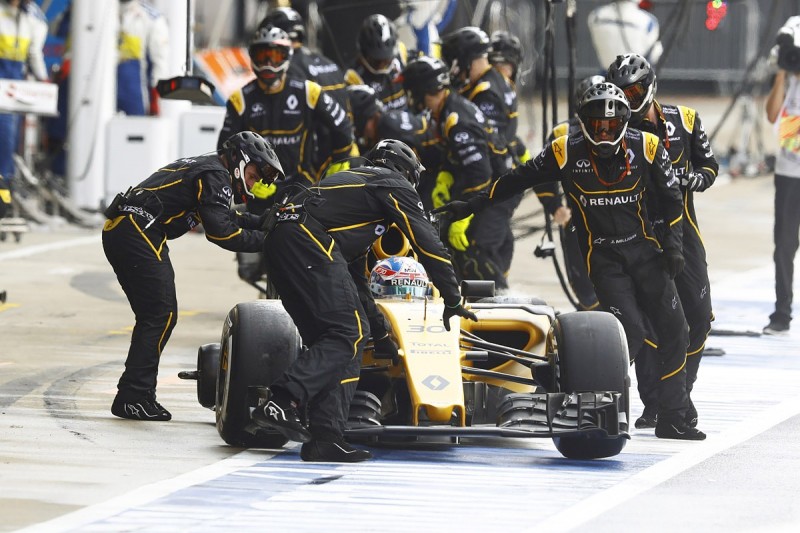 Vasseur, meanwhile, has explained the incident that led to Palmer being released from a pitstop during the British GP without the right-rear wheel attached was as a result of "human error", with the processes now rectified.

Palmer was subsequently handed a 10-second stop-go penalty for an unsafe release, dropping him to last, before later retiring with a gearbox failure.

Vasseur said: "As a team pitstops are conducted and practiced repeatedly, but there is no pit crew that never makes mistakes.

"When you think about it, it is truly remarkable it is possible to jack up a car, change four wheels and lower the car to depart in around two seconds.

"We are working all the time to make our stops quicker and we understand what went wrong in that isolated instance.

"We have changed the process to ensure the same mistake can't happen again."

Reserve driver Esteban Ocon will be handed his third FP1 outing of the season for the next race in Hungary, replacing Palmer.