Verstappen led a Red Bull one-two in second practice, finishing 0.265 seconds faster than team-mate Daniel Ricciardo, while the Ferraris wound up fourth and seventh and the Mercedes sixth and 13th.

Ferrari encountered traffic and Mercedes did not use the super-soft tyres, but Verstappen said he was confident that Red Bull would be able to find more time in its own RB12.

"Compared to other competitors, we showed great pace today, I think better than expected," he said.

"This track is very difficult for setting up the car balance. I had some struggles but at the end it also paid off with the last set-up change we did.

"We can definitely improve even more and we have to wait and see what [Mercedes] does.

Mercedes' Nico Rosberg was fastest by seven tenths in the morning session over team-mate Lewis Hamilton, who will start at the back of the grid on Sunday due to engine-change penalties.

Ricciardo was the best of the Red Bulls in the opening 90 minutes, sixth ahead of Verstappen, 1.434s slower than Rosberg having used the soft tyres rather than the super-softs run by Mercedes. 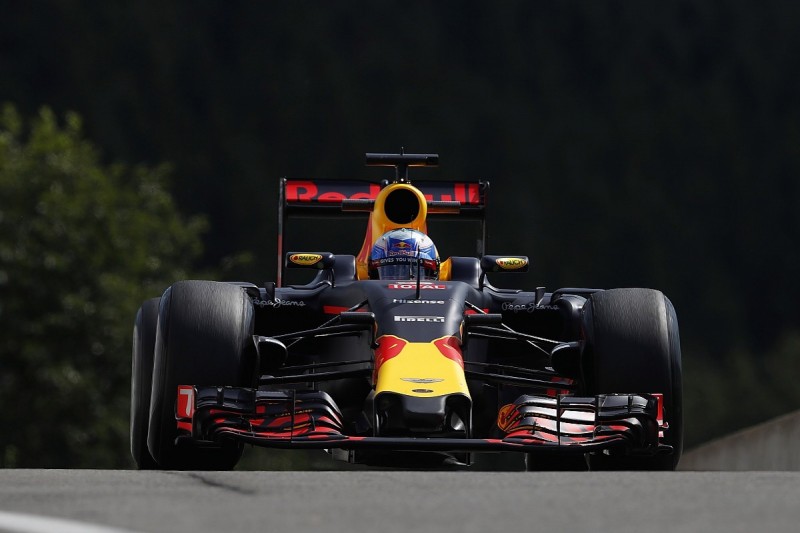 The Australian feels Mercedes has "still got a couple of tenths on us" on identical tyres, but like his team-mate believes there is more to come from Red Bull.

"We're still a little bit far from the ideal set-up," he admitted.

"The warm track doesn't help, the car is sliding a lot, the grip feels quite low in general.

"On the timesheets it looks good for us, we're first and second but I think we can still be quicker.

"Obviously Mercedes didn't use super-softs this afternoon, and Force India are pretty close - we'd like to stretch that out a little bit more.

"There's definitely some improvements we can make on the car, we'll try to do that and be even more competitive tomorrow.

"I think there's still a few tenths in the set-up, from what I know about the car we can definitely find that.

"If we get that, we can close the gap and maybe put a bit of pressure on [Rosberg]."

Belgian GP practice not much fun for Ferrari - Kimi Raikkonen