Perez: I had chance of Miami F1 win without engine issue

Sergio Perez felt he had a chance of winning in Miami had it not been for a Formula 1 engine sensor issue that cost him an estimated 30 horsepower.

Perez qualified fourth for Red Bull on Saturday, and spent the early part of the race closely tailing Ferrari’s Carlos Sainz for third.

But just as Perez began to close on Sainz, he reported a loss of engine power to his Red Bull engineer, who initially said thought the time loss was because of dropping out of Sainz’s tow.

The team ultimately found there had been a sensor issue on Perez’s engine, but the Mexican was able to take a free pit stop for fresh mediums under the safety car.

It put Perez in a strong position for the final 11-lap sprint to the chequered flag with the three cars ahead still running old hards, yet he was unable to find a way past Sainz despite an attempted lunge, leaving him to finish fourth.

“I was in a great spot,” Perez said. “Unfortunately even with a DRS, I couldn't get close to Carlos, the deficit on the straight-line was quite high.

“I was just pushing really hard to stay close to him on the corners.

PLUS: The late danger that could have cost Verstappen Miami GP victory

“My tyres were overheating, so as soon as I had a little opportunity, I went for it. It was too dirty offline.

“After that I just couldn't get close. The deficit on the straight-line was too much.”

Asked if he thought he had a chance to win the race after his switch to mediums, Perez replied: “With a normal engine, I would have had a chance.” 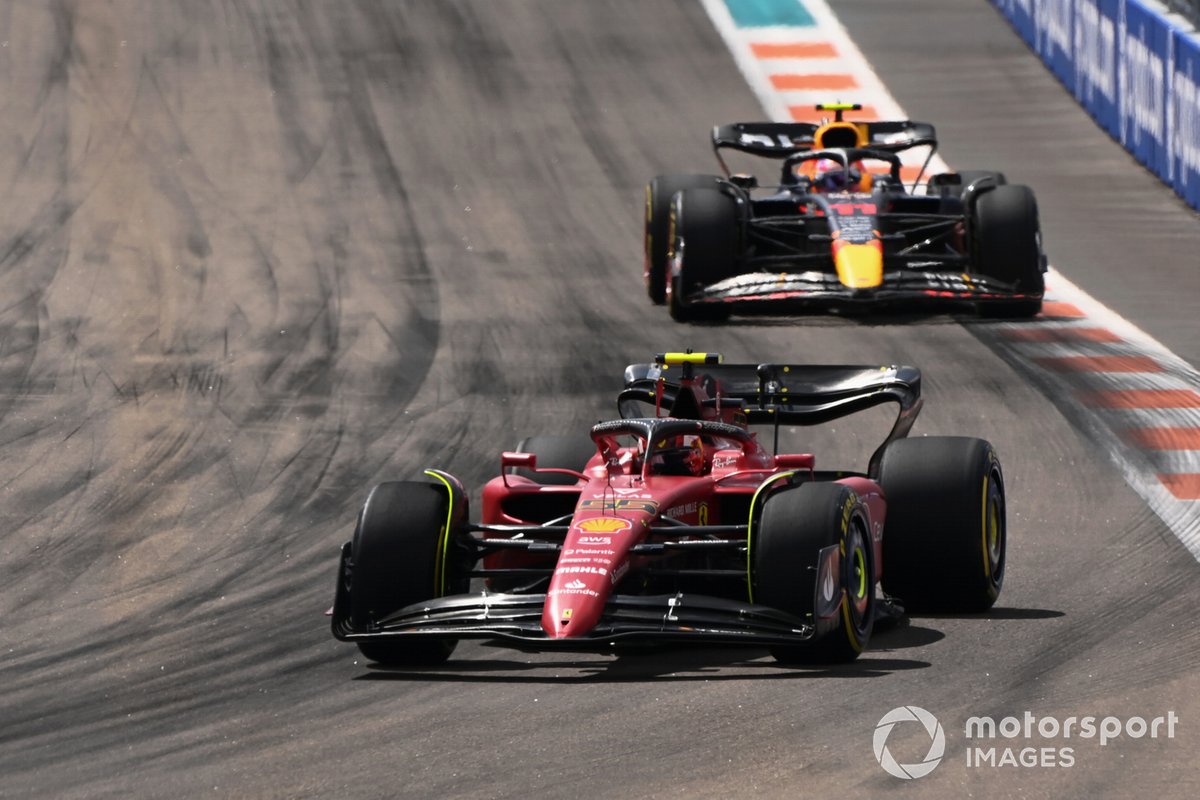 Although Perez’s pace stabilised following the initial time loss, he said the power was “never the same”, revealing he was “like 10 kph down on the straights”.

Red Bull team boss Christian Horner said Perez had got “really unlucky” with the issue, saying he “lost about 30 horsepower,” as a result.

“He gave it a real go when we pitted him and gave him the tyre advantage,” Perez said. “Without that issue, he may even have finished second.”

It was the latest power unit-related reliability setback for Red Bull in the early part of the year that has seen the team also hit trouble in Bahrain and Australia.

Perez felt it was not just bad luck that had hit Red Bull, acting as a further reminder of the work it needs to do to understand its current struggles.

“We need to keep working hard because every time we finding different issues,” Perez said.

“Luckily we managed to finish the race. I think at one point, it was really close to being over.

“So yeah, to be able to finish the race is good.”