Lando Norris will take the chance to "go for it" and race Max Verstappen in Formula 1's Austrian Grand Prix if he can, but remains "realistic" over McLaren's race potential.

Norris will share the front row with Verstappen for Sunday's second 2021 race at the Red Bull Ring, after they topped qualifying, with the Red Bull driver claiming pole.

In last weekend's Styrian GP at the same venue, Norris opted not to defend hard against Sergio Perez and Valtteri Bottas after starting third, as he was wary of damaging his tyres and therefore falling back to the chasing midfield pack once the 'Class A' runners had gone by.

He successfully took fifth in that race, the maximum result for McLaren if none of the frontrunners hit trouble, and initially joked that "probably another P5" would be his target in the Austrian GP.

But Norris then explained his attitude towards racing Verstappen if an opportunity arises because he wants "to be optimistic".

Norris said: "We'll do our best to try and take a step forwards and go in the right direction.

"But it wasn't like we were exactly close last weekend and now we have that little bit more of a step, I don't want to be too negative, I want to be optimistic as I should be.

"But I'm also realistic and know that it's going to be a very tough race.

"We're in the best position possible to maximise everything, but if I have a chance to go for P1, a chance to race Max and go for it then I will.

"I'm still doing that, I'm still racing – I still want to do the best I can. 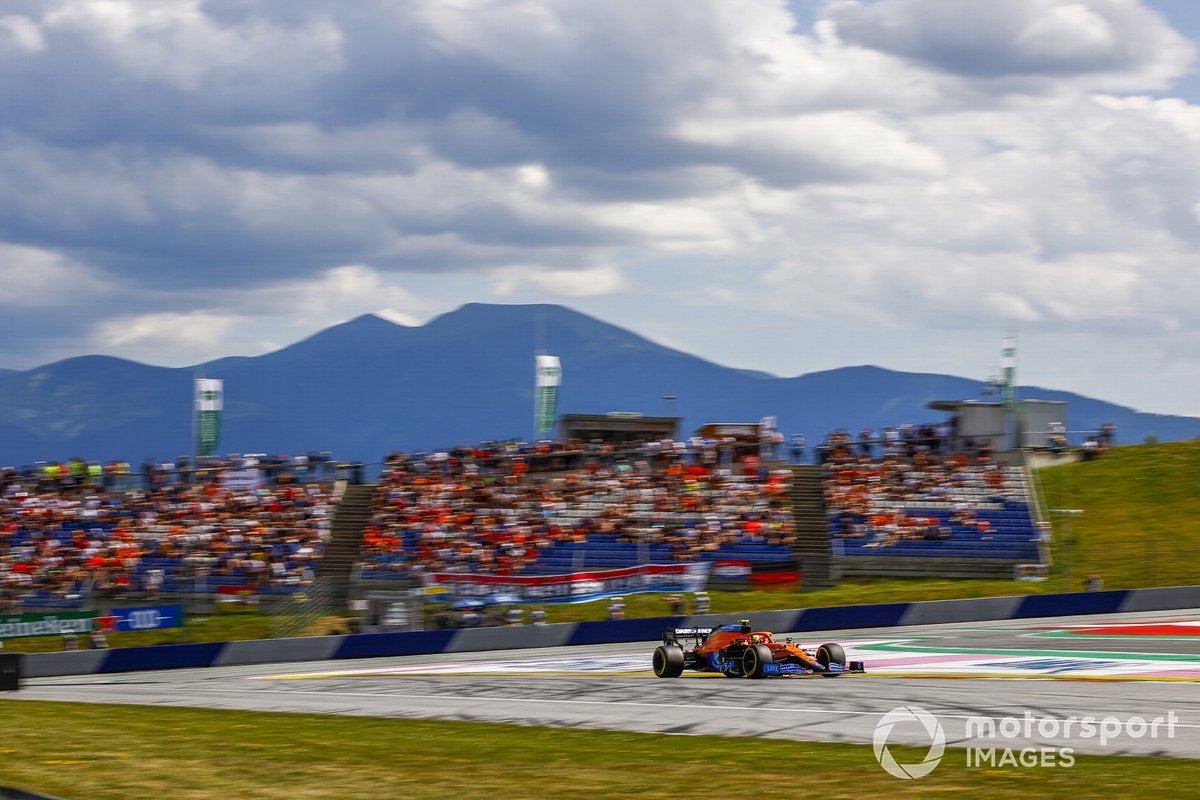 Norris ended up just 0.048s behind Verstappen after the final runs in Q3 on Saturday, where the Red Bull driver did not improve due to a lack of tow running at the head of the shootout pack.

But Norris does not think he would be able to find enough time to claim pole if he had the chance to do his final lap again.

"Of course there's always that little bit, but I'm sure Max would say the same thing," he explained.

"It's tough because it's so easy to just run that little bit wide and get your lap deleted and so on.

"And I think I improved already quite a bit in those last two corners compared to the rest of my lap.

"It's like risk versus reward and how much do you really risk? And I think I took the risk and I ended up where I did.

"But if I think if I had loads more opportunities or if you gave me another opportunity I don't necessarily think I would improve that much more.

"We are where we are. Throughout this year we know we don't have a good enough car comparing to Red Bull or Mercedes in general, and maybe today we do, but considering how much quicker they were last weekend I think it's obvious we struggle in a lot of areas.

"The car is not as quick as them and a lot of things are not possible comparing to them. So, I think I maximised our result and that's all I could do."