Hamilton needed to win the race with Rosberg fourth or lower to win his fourth world title but when it became clear that was not happening, he gradually slowed the pace.

Despite several radio messages telling him to speed up, Hamilton continued to slow, particularly in the final stint, allowing the Red Bull and Ferrari drivers to close on Rosberg in second.

There were suggestions pre-race that Hamilton would use that tactic but Rosberg insisted he did not think that would happen.

"I wasn't expecting it, no," he said. "Maybe that was a bit naive but I didn't expect it.

"But it's not something we need to discuss a lot.

"It's easy to understand the team's side, because we do a certain thing all year and it doesn't change just in the last race.

"But at the same time, you can understand Lewis because it's the world championship.

"We are out there fighting, we're drivers and you can understand he wants to try something.

"We can just leave it at that."

As Sebastian Vettel closed up on Rosberg, the Mercedes driver's engineer reminded him he only needed third to win the championship. 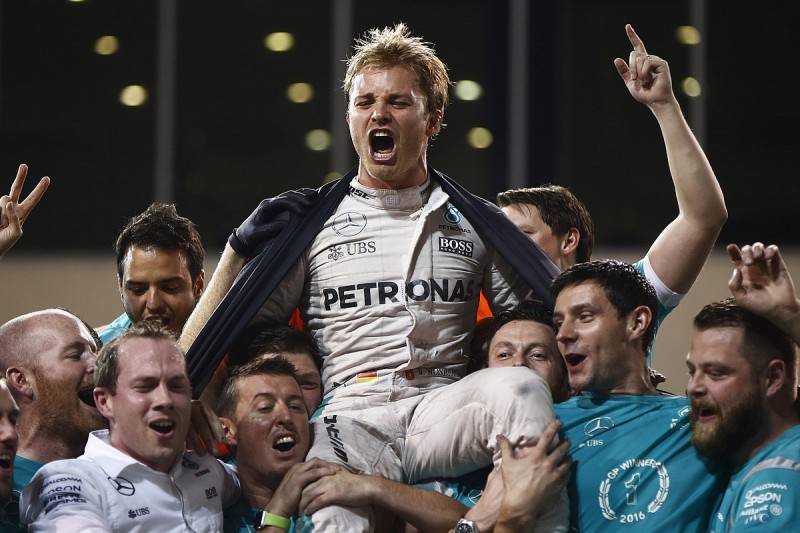 But Rosberg said he couldn't afford to concede second to Vettel because he was concerned about the potential challenge from Max Verstappen in fourth.

"I had Vettel and Verstappen right behind," he said.

"I wanted to try and hold onto second because once I dropped one, who knows what kind of mess they are going to get into in front.

When asked why he didn't risk a move for the lead if he felt he was being held up, Rosberg said: "I couldn't. I was trying at times but Lewis was doing it really well.

"I couldn't get close enough, he has the same car as me.

"Then he backed off in the part where I can't overtake.

"He was doing it perfectly and there was no way through for me."