Ricciardo topped the first two stages of qualifying, with Verstappen unable even to take to the track thanks to damage sustained in a morning accident at the second part of Swimming Pool that forced a gearbox change, before banging in a 1m10.810s on his first run in Q3 to take top spot.

Mercedes driver Lewis Hamilton briefly threatened Ricciardo's position with the fastest first sector time of qualifying on his final flier, but lost pace later in the lap and ended up third behind Ferrari driver Sebastian Vettel.

Ricciardo, meanwhile, looked set to improve, but dropped time in the final sector and ended up posting a lap 0.036 seconds slower than his first attempt.

This is only Ricciardo's second pole position in F1, coming two years after his first at the same venue.

Kimi Raikkonen was fourth fastest, just 0.034s slower than Hamilton, with the second Mercedes of Valtteri Bottas in fifth place.

Of the Q3 runners, only the Mercedes drivers attempted an alternative strategy by using ultrasofts for their first runs in Q2.

But neither Hamilton nor Bottas was quick enough and had to run again on hypersofts, meaning all of the top 10 will start on the softest Pirelli compound.

Esteban Ocon won the battle for best of the rest in sixth place, with just 0.160s covering the bottom five in Q3. 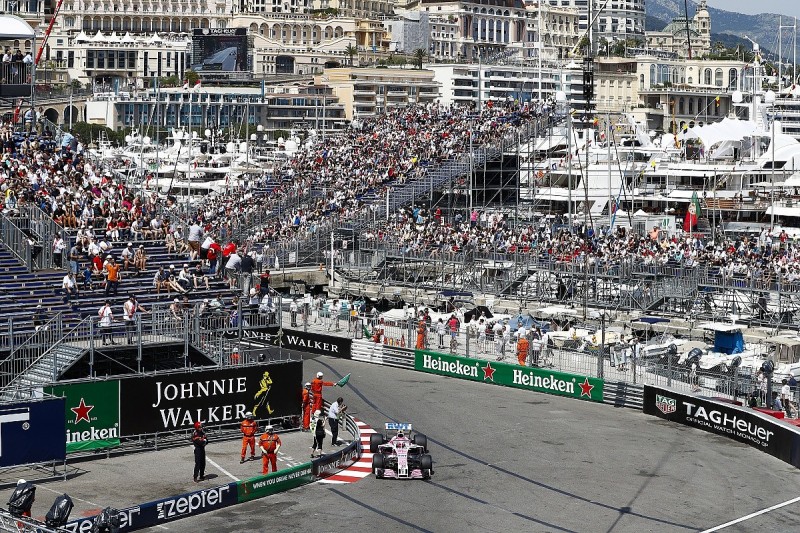 Nico Hulkenberg's final lap in Q2 was not good enough to get him into the top 10, falling a tenth short of Gasly's time.

McLaren's Stoffel Vandoorne was shuffled down to 12th, having been sixth based on his time on the first runs, thanks to failing to improve on his second set of tyres - potentially as a result of a minor problem with the car.

Williams driver Sergey Sirotkin and Sauber's Charles Leclerc were eighth and ninth respectively in Q1, but ended up 13th and 14th overall despite both making slight improvements in the second stage of qualifying.

Romain Grosjean was 15th for Haas, just 0.014s slower than Leclerc, as the team continued to struggle. He is also carrying a three-place grid penalty from his Spanish GP accident.

Toro Rosso driver Brendon Hartley was fastest of those to be eliminated in Q1 in 16th place.

His first run was not quick enough to avoid the dropzone, and he was only able to make an improvement of 0.224s on his second set of hypersofts.

A yellow flag at Ste Devote because Leclerc briefly went off meant he could not make a final attempt to get into the top 15.

Sauber's Marcus Ericsson was 17th ahead of the Williams of Lance Stroll, with Kevin Magnussen's difficult weekend continuing as he ended up in 19th and last place of the runners ahead only of Verstappen.