After enjoying a one-two in FP1 and FP2 on Thursday Red Bull continued its fine form on the streets of Monte Carlo with Verstappen initially turning the tables on Ricciardo.

However, when Verstappen emerged for a late run on fresh hypersofts he crashed exiting the Swimming Pool section on his first flying lap.

Verstappen had a small wobble after clearing the Renault of Carlos Sainz Jr approaching the right-left chicane, then clipped the inside wall as he turned in.

That broke the right front steering and sent Verstappen across the chicane's run-off and into the wall heavily on the right-hand side.

It was an almost identical crash to one Verstappen suffered two years ago, and gives Red Bull significant work to do to get the car ready for qualifying. 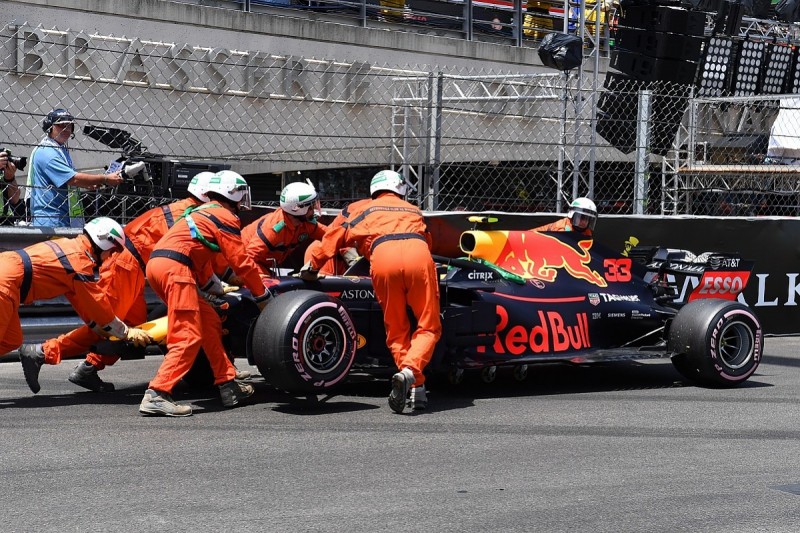 The session was red-flagged before resuming with three minutes remaining, and Ricciardo took full advantage to improve to a 1m11.786s, just one-thousandth of a second faster than Verstappen.

Sebastian Vettel headed Ferrari's charge two tenths back in third, with Lewis Hamilton best of the Mercedes drivers in fifth.

Raikkonen slipped in between the title rivals, a tenth back from his team-mate after a lap that looked very strong before fading in the final sequence of corners.

Valtteri Bottas struggled initially in the second Mercedes, which required a rear wing change after the Finn clobbered the barrier in the Ste Devote run-off after attempting a quick U-turn having run straight on.

He did jump up the order with 20 minutes remaining by getting ahead of Hamilton into fifth on a 1m12.356s.

Hamilton then hit back with a time less than a tenth faster despite encountering a Williams just as he approached the final corner.

Brendon Hartley took best-of-the-rest honours in seventh behind the big three teams for Toro Rosso ahead of team-mate Pierre Gasly.

Sainz, who also took to the Turn 1 escape road during the session but rejoined without damaging his car, and Williams rookie Sergey Sirotkin completed the top 10.