Hamilton resisted more than 60 laps of pressure from Verstappen to hold on to victory despite having to manage softer tyres than his pursuers.

As Verstappen was not able to get past the Mercedes and edge clear - despite a late dive at the chicane two laps from the end - he fell from second to fourth at the flag because of a five-second time penalty.

Verstappen picked that up for an unsafe release in the pits that had got him ahead of the second Mercedes of Bottas, who he made light contact with and forced into the wall.

Verstappen therefore fell behind both Sebastian Vettel's Ferrari and Bottas, who completed the podium despite needing to make a second pitstop under the safety car after his brush with the wall caused a puncture.

Poleman Hamilton retained his advantage at the start ahead of Bottas, despite Verstappen having a look inside Bottas at Ste Devote on the first lap.

The leaders held station for the opening stint, which was cut short by a safety car after Charles Leclerc - who started 15th following Ferrari's qualifying blunder - littered the track with debris from a dramatic puncture.

Leclerc hit the inside wall at Rascasse and half-spun after trying to pass Nico Hulkenberg for 11th.

He tried to continue but picked up a puncture and scattered a large amount of debris as the rubber fell apart around the rest of the lap. 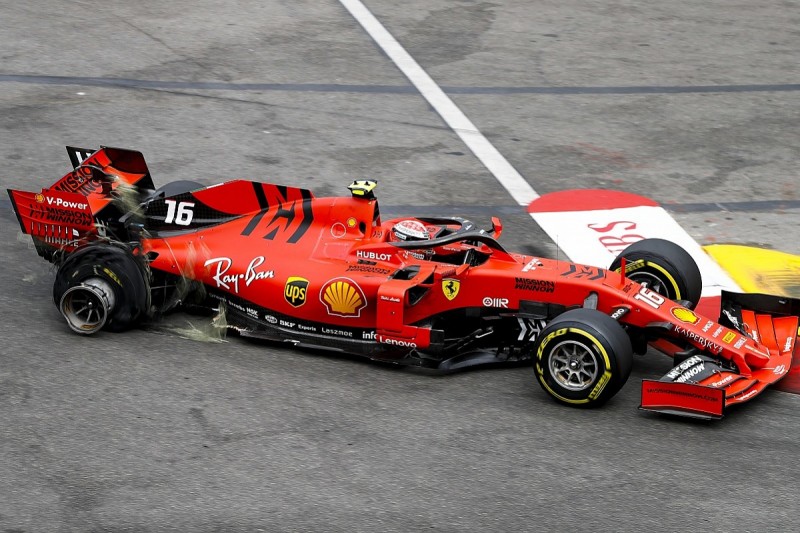 Mercedes opted to pit both its cars under the caution and Bottas dropped back behind Hamilton under the safety car to try to create enough of a gap to avoid losing time.

When they stopped Verstappen was released just as Bottas was coming past, and though Verstappen was a nose ahead a small amount of contact forced Bottas to kiss the wall on the right-hand side.

The incident damaged Bottas's wheel rim and caused a slow puncture, but with the safety car still deployed he only dropped behind Vettel to fourth - and eventually Verstappen was awarded a five-second penalty for the unsafe release.

Once the race resumed, Verstappen hounded Hamilton constantly, but only got close enough to really start attacking the five-time world champion in the final 10 laps.

He had a brief look to the outside of the hairpin with eight laps left but was not close enough on the exit of Portier to get a proper run at Hamilton into the chicane.

On lap 76 of 78 he lunged Hamilton into the chicane, but Hamilton moved across. Verstappen locked up and they made minor wheel-to-wheel contact - Verstappen's right-front to Hamilton's left-rear - and Hamilton took to the escape road, but both continued without damage.

Hamilton's win extended his championship lead over Bottas to 17 points. 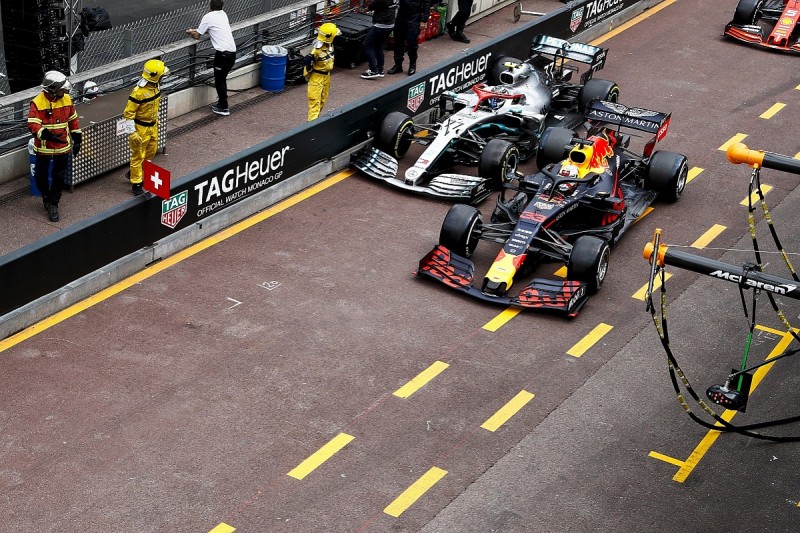 Vettel and Bottas were slightly adrift of the leaders across the line but within five seconds, crucially enough to consign Verstappen to fourth.

Verstappen's Red Bull team-mate Pierre Gasly finished in fifth, his best result since his move to the senior team, and earned fastest lap after building enough of a gap to make a late, free pitstop for fresh soft tyres.

Behind, Carlos Sainz Jr earned his best result for McLaren in sixth place after opting not to pit under the early safety car.

That strategy was replicated by Daniil Kvyat and Alex Albon, who used it to great effect to finish seventh and eighth for Toro Rosso.

Renault's Daniel Ricciardo finished ninth, the lead midfield runner who did pit under the safety car.

Romain Grosjean, who opted for the same strategy as Sainz/Kvyat/Albon, completed the points scorers for Haas.

Leclerc was the only retirement from the grand prix after initially endeavouring to continue following his early setback but soon parking his battered Ferrari in the pits.

There was a separate Rascasse incident shortly after the safety car, when Antonio Giovinazzi hit Robert Kubica and spun the Williams.

The track was briefly blocked, holding up a few cars, but Kubica was able to reverse and get out of the way quickly - preventing anything worse than localised yellow flags.

Anatomy of an awful Ferrari blunder