A downpour ahead of Thursday afternoon's second free practice session created a treacherous surface, and apart from a single installation lap by the Williams of Valtteri Bottas, no other cars ran for the first 38 minutes.

This led to some whistling from fans in the grandstands around the harbour, who then clapped and cheered when Adrian Sutil's Sauber finally ventured out as the circuit dried.

Perez, whose Force India team also elected to sit out the early part of the session, said he felt bad for fans who "pay a lot of money" to see F1 cars in action.

"I would be [disappointed] too but it's normal, you have to think of the longer term," said Perez, when asked by AUTOSPORT about the lack of early running disappointing the fans.

"It's really hard for the fans but at the same time our teams have other worries. We're limited and we don't want to damage parts.

"I feel very sorry for the fans, but we will put on a good show on Sunday."

Perez's team-mate Nico Hulkenberg said a lack of running was inevitable when teams were forecasting a dry race on Sunday.

"Yes it is a big pity for the spectators but this is Formula 1," he said.

"I think you would have to force us or put a rule in place that [says] we will run in conditions like this.

"If we don't see a big gain for us then that's what happens."

McLaren driver Jenson Button said the lack of grip on intermediate tyres, combined with the extra torque from the new V6 turbo engines, made the cars difficult to drive around Monaco in slippery conditions. 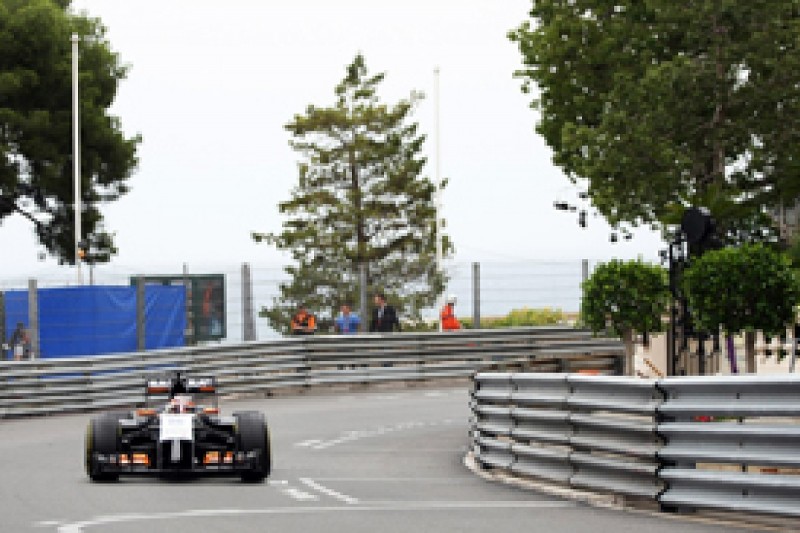 "The inters are very difficult, even when the circuit is nearly dry there's no grip at all," he said.

"The tyres aren't working even though the circuit is almost dry and you're wheelspinning in fifth gear, so that makes it pretty tricky.

"It's something that's unusual to us when you're normally so confident to hit the throttle hard."

A NO-WIN SITUATION FOR F1?

Tyre supplier Pirelli said the conservatism of the teams was understandable given the nature of the circuit, despite also being allocated an extra set of intermediate tyres to use in the session.

"You can easily criticise, but you've also got to look at the practical side, which is if you go off you're going to damage your car, and everybody would be saying 'driver x who hasn't participated in this session, weren't they stupid going out in this situation?'" Hembery said.

"This is a street circuit. It's different when you're on a full-size circuit with lots of run-off and the margin is much greater.