While Kevin Magnussen finished sixth for Haas in the French Grand Prix, matching his best result of the season and taking his points tally to 27, Grosjean is still yet to score a point in 2018.

Grosjean started 10th after crashing in Q3 and then moved across into Esteban Ocon at the start of the race, which earned him a five-second penalty as he went on to finish 11th.

Haas F1 team principal Gunther Steiner told Autosport: "It seems to be always a difficult one, a driver going for it and one not.

"We had it with Kevin last year, when he had a down period and people were picking on him.

"At the moment it's Romain for whom it goes all wrong. It never seems to be raining, it's always pouring.

"He's trying to get back on his feet, then he gets a penalty. After a while it beats you down. But I think he's strong enough to overcome it."

Team errors, mechanical problems and mistakes from Grosjean have dogged his campaign so far. 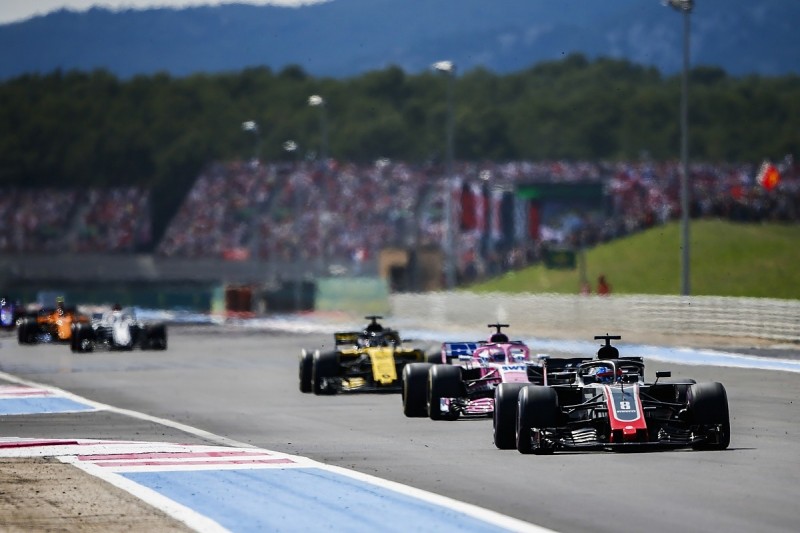 "We pushed as hard as we could, but we had some damage on the car from the first lap, and that was difficult because it removed some aero balance," said the Frenchman.

"I came back as hard as I could, but we were just too far back.

"The car is superfast and Kevin did a great job, so I'm happy with that.

"But I want my turn to come because this stretch of bad luck is becoming a bit painful."

Steiner says there is little he can do to help Grosjean get his season back on track beyond just believing in his driver.

"His performance was all good until Q3," said Steiner. "What can I say? He will be back.

"I guess one day we will get them both in the points. I don't think the points are far away for him."

Grosjean's absence from the points means Haas is relying on Magnussen in the constructors' championship, and has less than half fourth-placed Renault's tally despite often matching the French manufacturer for pace.

Haas moved into a clear seventh in the championship with Magnussen's sixth place in France, just one point behind Force India.

"We're happy with that," said Steiner. "You always want more, so we wanted to be seventh [with Grosjean] as well, but that wasn't there.

"This is where we want to be. Hopefully it's the start of collecting points."