Mercedes is set to test its car without DAS in Formula 1 practice for the Portuguese Grand Prix, as part of a learning exercise for next year

The Dual Axis Steering system, which first appeared in winter testing, alters the front wheel toe angle when the driver pushes or pulls on the steering wheel.

It is not used on every lap but has been helpful for Mercedes under certain circumstances this season, as it helps to quickly cycle heat into the tyres such as at the end of safety car periods.

Mercedes is the only team to run it and, to prevent an expensive arms race among all the teams, the FIA has already moved to ban it for next year.

The ban will force Mercedes to make changes to its steering system for 2021, and it appears that the German car manufacturer is making an early effort to understand the implications of the modifications.

As our exclusive photograph shows below, the steering assembly that the team has built the car up with is a passive solution like the one used by Mercedes in 2019.

In doing so, Mercedes has temporarily abandoned the driver adjustability that the Dual Axis Steering system usually offers. 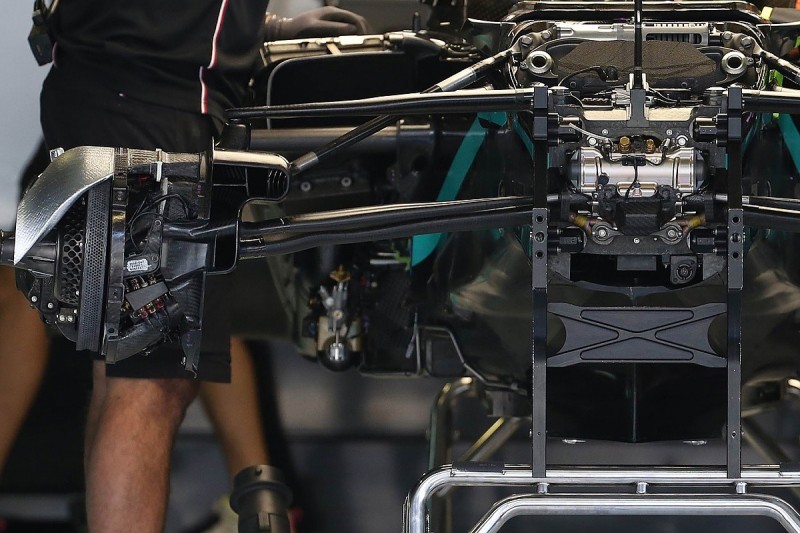 It is unclear if the removal will just be for the opening day of action or will remain in place for the remainder of the weekend.

However, in taking time to assess this now, the team has plenty of time to react to any adverse behaviour that it hadn't already expected.

Autosport has learned that both Mercedes cars will run without DAS in Friday's practice sessions.

It is understood that the test is aimed at helping both the team and drivers understand the implications of the DAS removal.

In taking time to assess this now, the team has plenty of time to react to any adverse behaviour that it had not already expected.

Earlier on Thursday, Lewis Hamilton had praised the job that Mercedes has done in bringing DAS to F1 - and said the team would find other 'genius' solutions in the future.

"A lot of the directions that Valtteri [Bottas] and I have been pushing the car over these past couple of years have come to fruition, and then there's I'd say things that the team have dreamed up - some incredible designs such as DAS," he said.

"Of course, it's not around for next year which is totally fine, we'll find another - another of the geniuses will come up with another great way of moving the team forward."