Mercedes Formula 1 boss Toto Wolff has paid tribute to the late Niki Lauda, saying the three-time world champion was "irreplaceable" and a "hero"

Lauda passed away on Monday evening at the age of 70.

He also owned a 10% stake in Mercedes Grand Prix Limited and had a contract to remain with the team at least until 2020, like Wolff himself.

"First of all, on behalf of the team and all at Mercedes, I wish to send our deepest condolences to Birgit [Lauda's wife], Niki's children, his family and close friends," said Wolff in a statement released by Mercedes.

"Niki will always remain one of the greatest legends of our sport - he combined heroism, humanity and honesty inside and outside the cockpit.

"His passing leaves a void in Formula 1. We haven't just lost a hero who staged the most remarkable comeback ever seen, but also a man who brought precious clarity and candour to modern Formula 1. He will be greatly missed as our voice of common sense.

"Our Mercedes team has also lost a guiding light. As a team-mate over the past six and a half years, Niki was always brutally honest - and utterly loyal. 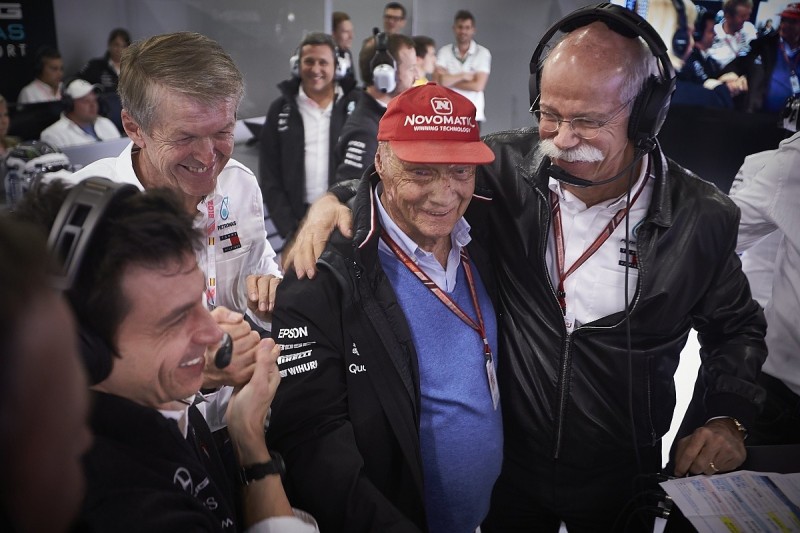 "It was a privilege to count him among our team and moving to witness just how much it meant to him to be part of the team's success.

"Whenever he walked the floor in Brackley and Brixworth [Mercedes' respective chassis and engine bases], or delivered one of his famous motivational speeches, he brought an energy that nobody else could replicate.

"Niki, you are quite simple irreplaceable, there will never be another like you. It was our honour to call you our chairman - and my privilege to call you my friend."