Ferrari, McLaren, Mercedes and several Formula 1 and motorsport personalities are among those to have paid tribute to three-time world champion Niki Lauda, who died on Monday

Lauda won two of his titles with Ferrari before claiming his third with McLaren after coming out of retirement.

More recently, he served as the Mercedes team's non-executive chairman, and was a crucial figure for the squad during its current unbroken run of title successes since the start of 2014.

Ferrari: Today is a sad day for F1. The great Ferrari family learns with deep sadness the news of the death of our friend Niki Lauda, three times world champion, two with the Scuderia (1975-1977). You will remain forever in our hearts and in those of the fans. #CiaoNiki

McLaren: All at McLaren are deeply saddened to learn that our friend, colleague and 1984 Formula 1 World Champion, Niki Lauda, has passed away. Niki will forever be in our hearts and enshrined in our history.

Johnny Herbert, two-time GP winner: A real loss to Sport and a big hole in our hearts. Courageous, chatty, and extremely funny. I am going to miss you being around the @F1 paddock but the legend of Niki Lauda will live on, because you were a very very special man. Thanks for all the memories 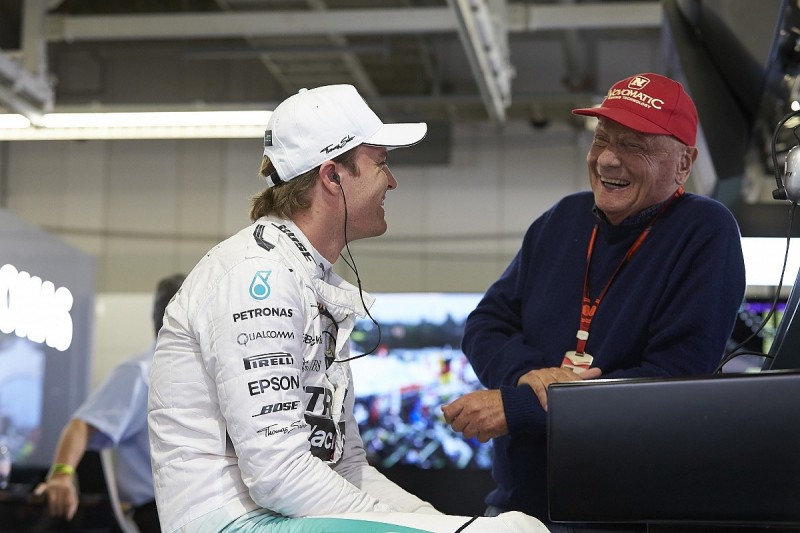 Nico Rosberg, 2016 F1 champion: Dear Niki. Thank you for everything that you did for me. I learned so much from you. Your passion, your fighting spirit, to never give up, your belief that you always meet twice in life, and even your patience with us youngsters. Myself and all of your 100 million fans around the world whom you also so strongly inspired to never give up in the hardest of times are thinking of you and your family and wish that you rest in peace.

Chase Carey, F1 CEO: It is with great sadness that we learned of the death of Niki Lauda. Formula 1 has lost not only one of the truly great exponents of the sport but also one of its heroes. His love of racing and the courage he demonstrated were simply extraordinary and he inspired so many fans. His passing is a great loss for the entire Formula 1 family and motorsport as a whole. All our thoughts go out to his family.

Giedo van der Garde, ex-F1 driver: Saddened by the news of Niki Lauda. Not only a huge inspiration with the biggest comeback in sport so far, but a unique personality as well. Personally I'll never forget him sticking up for me in Melbourne after my F1 career ended. Rest In Peace, Niki.

Casey Stoner, two-time MotoGP champion: RIP Niki Lauda, a true Icon and Motorsport legend. Thoughts are with his family and loved ones at this time.

Andretti Autosport: We are deeply saddened to hear of the passing of Niki Lauda. He will forever be remembered as a legend, a friend, advocate for safety in our sport and much, much more. Niki will be missed deeply and our sincerest condolences are with his family and friends.

RIP Niki ! ? Today a true hero left us! Thanks Niki for the inspiration you have been to so many, for the directness you have always applied, the amazing speed & fighting spirit you had. We will miss you, but never forget you. My condolences to Niki's family and friends. ? pic.twitter.com/80rnHgoi3L

Simon Pagenaud, 2016 IndyCar champion: Niki Lauda was a pure example of hard work pays off! He said he had a great ass & could feel everything the car was doing. My Hero and I wish I was a Senna but I often think I was born more like a Lauda! Thank you Niki for all that you gave the sport, sad you have left us

Alex Zanardi (translated): You wake up in the morning, look outside.. Raining. What a sad day. Then read the news and find out he is dead, #NikiLauda, one of your heroes. And then yes, it really is a sad day! Godspeed Niki.

Sebastien Buemi, Formula E and WEC champion: Really sad to hear the news that Niki Lauda has died. One of the true racers ! Rest in peace Niki you will be deeply missed.

F1 (on Twitter): Rest in peace Niki Lauda. Forever carried in our hearts, forever immortalised in our history. The motorsport community today mourns the devastating loss of a true legend. The thoughts of everyone at F1 are with his friends and family.